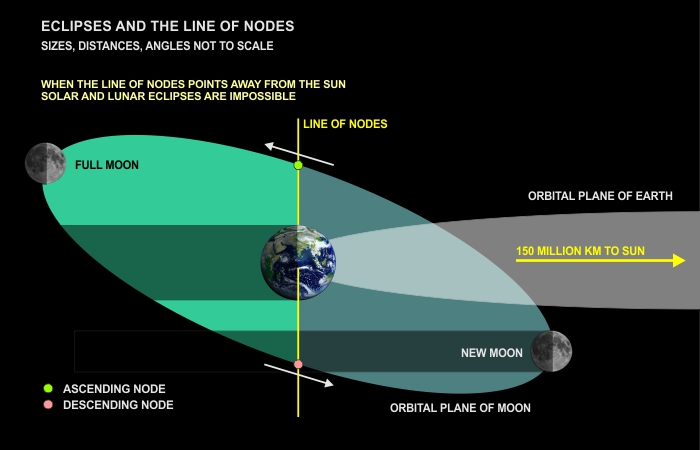 Last week we investigated how the moons of Mars engage in occultations, transits, lunar eclipses, and annular solar eclipses. But Phobos and Deimos have unusual orbits: Both lie almost exactly in the equatorial plane of Mars. Today we’ll examine lunar and solar eclipses as experienced here on Earth.

Our Moon does not orbit in Earth’s equatorial plane. It orbits in a plane inclined to Earth’s orbit by 5.145°. Earth’s equator is also inclined to the plane of its orbit, but by 23.5°. This makes prediction of eclipses a bit more complicated but the math is easily managed by computers.

Two planes, unless parallel, always intersect in a line. The Moon’s orbital plane intersects the Earth’s orbital plane at the line of nodes. In the graphic above, this line points away from the Sun so eclipses would not be possible. Instead, the New Moon passes below the Sun in the sky and its shadow does not fall on Earth. Likewise, the Full Moon passes above Earth’s shadow and avoids being eclipsed.

However, twice each year the line of nodes will point toward the Sun. For several days around this alignment, it is possible for the Moon’s shadow to fall on Earth and create a solar eclipse for observers inside the shadow. Likewise, the Moon can pass through Earth’s shadow creating a lunar eclipse for observers on Earth’s night side. Here’s the geometry: 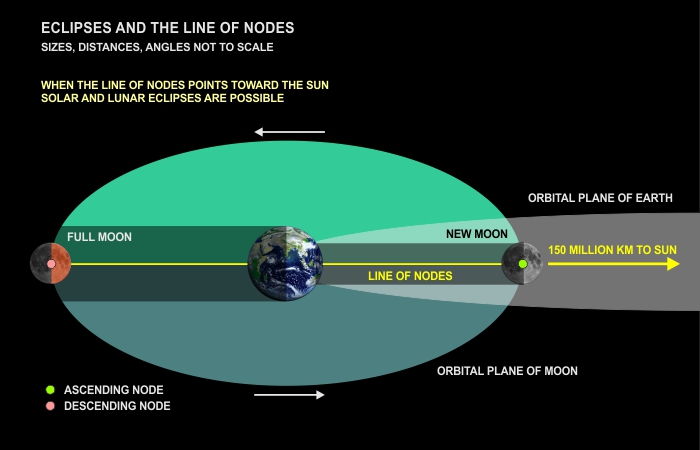 If you’re curious why I made the Full Moon “reddish” in that graphic see my Feb 6, 2017 post: Lunar Eclipse Geometry. You’ll learn exactly what causes a “blood moon.”

The line of nodes rotates 360° every 18.6 years due to gravitational forces from the Sun. This gives rise to the Saros cycle of repeating eclipses that astronomers can use to predict when and where an eclipse will occur. The Saros cycle was first discovered sometime around 300 BC. It was originally a closely-guarded secret of the astrologers and high priests, since the ability to predict eclipses was seen as “magic” by most people.

Eclipse tables are now public domain and calculated for many years in advance. You can visit the NASA Eclipse Web Site and see what’s predicted for your area of the planet. These days the only “magic” is how accurate eclipse predictions have become. Times are given to the nearest second.