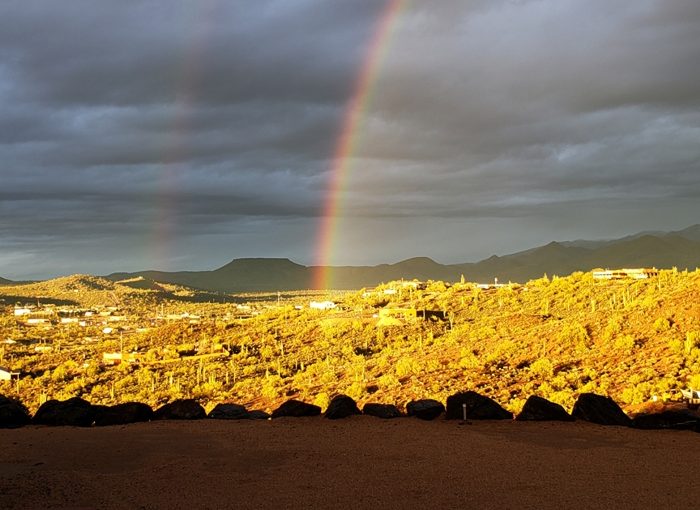 Last week I was fortunate to capture one of the brightest rainbows I’ve ever seen. The dark overcast sky in the background enhanced the contrast. A faint secondary bow was visible. The spectacle only lasted a few minutes, and I’d never tried the “panorama” function on my phone, so I just panned the video along the arc of the bow. It was close to a full 180° — under most conditions, the longest rainbow you can see.

When I went out earlier to enjoy the sunset this is what I saw (below). It had been raining, and was still raining to the east of us. When the Sun dropped fully beneath that cloud we’d have perfect conditions for a rainbow. So I grabbed my smartphone and headed out to the east yard. 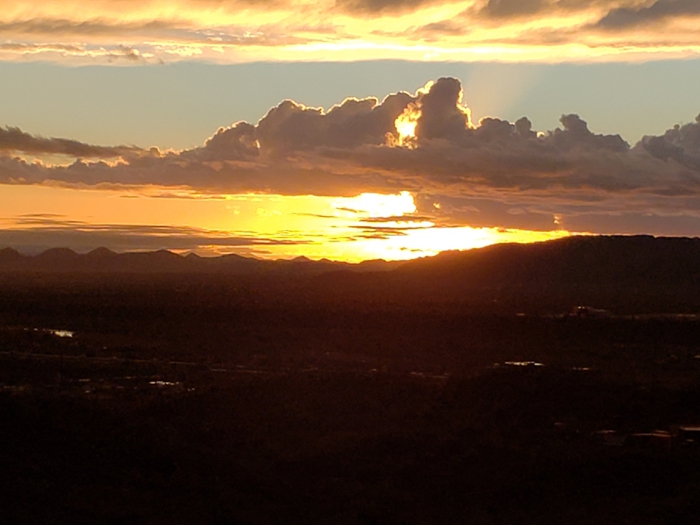 Alas, the rain had stopped, but Gavilan Peak showed a striking golden glow against the dark sky warranting its own photo. Since “moonshine” is sunlight reflected from the Moon, I choose to call this phenomenon mountainshine. Spellcheck doesn’t like it, but it’s an apt description. Any time we have dark sky to the east at sunset we see this high-contrast mountainshine. In this photo the rocks and foliage were still wet, and that made the mountain even more reflective: 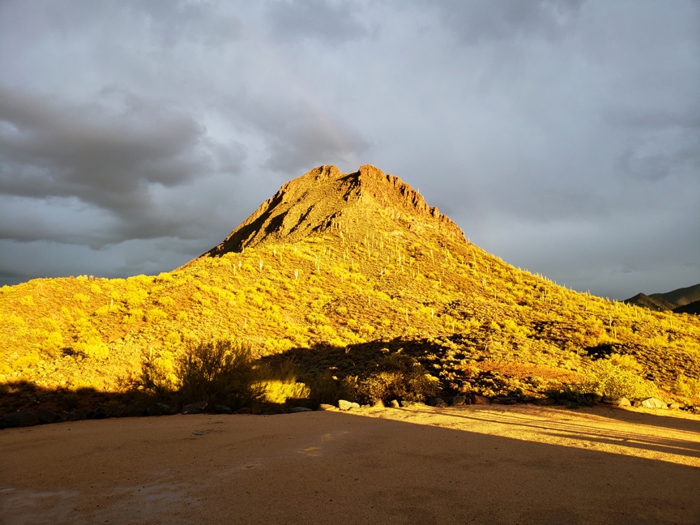 A few minutes after that photo it started raining again and the primary rainbow appeared. As the Sun slipped more fully under the cloud deck the primary bow brightened and the secondary bow appeared. That’s when I started shooting the video. The double bow was only there for a few minutes. It rapidly dimmed as the Sun set.

Knowing when to expect a rainbow can provide some great photo ops. Just remember that the rainbow will always appear opposite the Sun in the sky. And, of course, there must be rain (or a hose spraying) in that opposite direction. In next week’s post we’ll look at a scene from a TV commercial that clearly violates these conditions.

Next Week in Sky Lights ⇒ Bad Science in Advertising

Fog in the Desert
Bad Science in Advertising

2 comments on “Perfect Storm for a Rainbow”