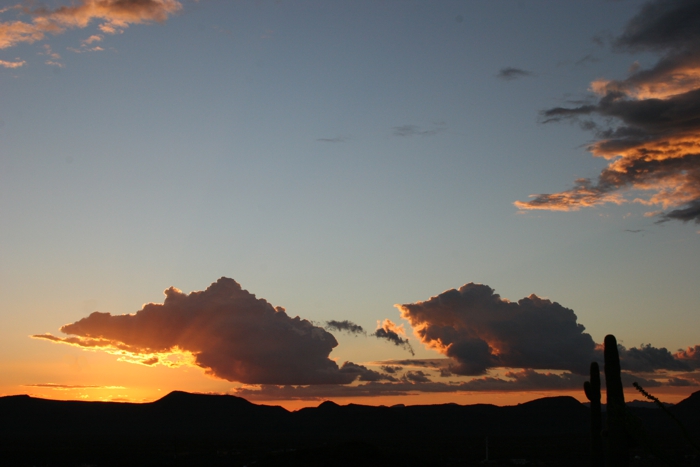 I almost always check out the sunset from my front deck. That’s where most of the sunset photos you’ve seen in Sky Lights came from. Because of our typically spectacular desert sunsets I’m usually rewarded with a fantastic view. This night it was a bright “golden lining” on a cloud over Lake Pleasant. FYI, not all clouds have silver linings. But silver linings can also be photo-worthy: https://sky-lights.org/2010/08/01/qa-silver-linings/

If you look closely, you’ll also see some golden crepuscular rays streaming upward across the cloud above the Sun. I’ve seen (and photographed) better rays but they’re always a nice touch on a sunset. I was focused on these clouds and almost missed some equally extraordinary clouds out of frame to the left. Once I realized what I was seeing I had to get another photo: 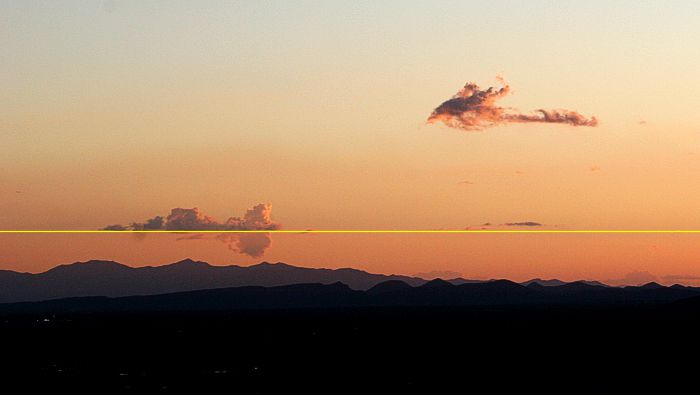 The yellow line marks the altitude at which the air temperature is lower than the dew point. That altitude is known as the lifted condensation level (LCL). With 2300 ft South Mountain in the background, I’d estimate the LCL is around 3000 ft. Above the LCL clouds can form. Invisible water vapor will condense into micro-droplets that scatter light and make clouds visible. Warm humid air is rising over the city of Phoenix and fueling the growth of those clouds. The two clouds on the right are closer and so appear above the yellow line.

But wait … what’s that cloud below the yellow line? Sure, the LCL is not a geometrically flat plane — air is a fluid. But that cloud extends to around 1000 ft below the LCL. A cloud should not be forming at that altitude. The explanation lies in an optical phenomenon known as an inferior mirage.

Turns out that cloud isn’t really there. It’s an inverted image of the real cloud above the yellow line. Look at the structural similarities. There’s some distortion, but they are reasonably precise mirror images. All you need for this illusion is warmer air near the ground to refract light rays upward (light rays always refract toward cooler air), and that’s often the temperature profile over Phoenix after sunset. Here’s the geometry:

The eye-brain system assumes an object resides in the direction the rays are coming from. In the cooler air above the LCL, it’s relatively uniform temperature allows direct rays from the object to enter the eye where it will be correctly perceived. Below the LCL, where the temperature is strongly stratified, light rays that would have normally missed the eye are curved back upward to enter the eye. The eye-brain constructs a mirage of the real object by following those rays back along a linear path.

The cloud at upper right provided a final surprise. There’s a relatively rare type of cloud formation created by Kelvin-Helmholtz instabilities. A Google image search brings up many beautiful examples. For these clouds to form you need a fast-moving stream of air blowing just above the LCL. You can see there are 3 (maybe 4) waves emerging from the right side of that cloud. Not as spectacular as other online images, but the best one I’ve ever seen or photographed. A serendipitous sunset indeed.

My attention was initially directed at the golden lining sunset and crepuscular rays. But as a skygazer I’ve learned it always pays to scan around. You never know what’s out there unless you give serendipity a chance.

Next Week in Sky Lights ⇒ Fog in the Desert

Q&A: Questions to Start the New Year
Fog in the Desert
HOME