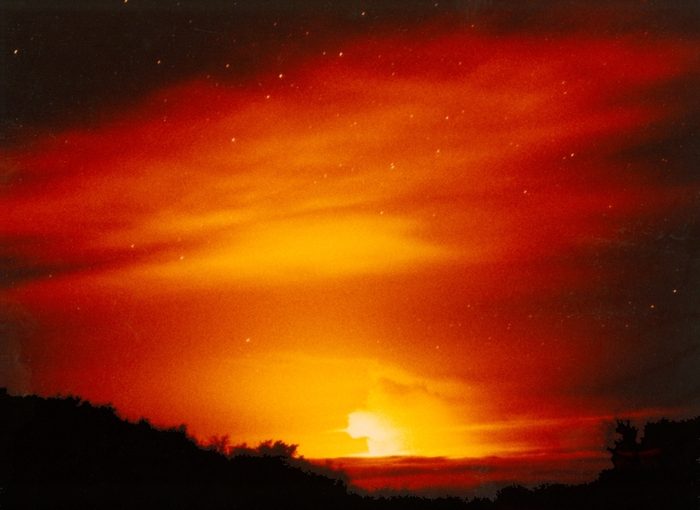 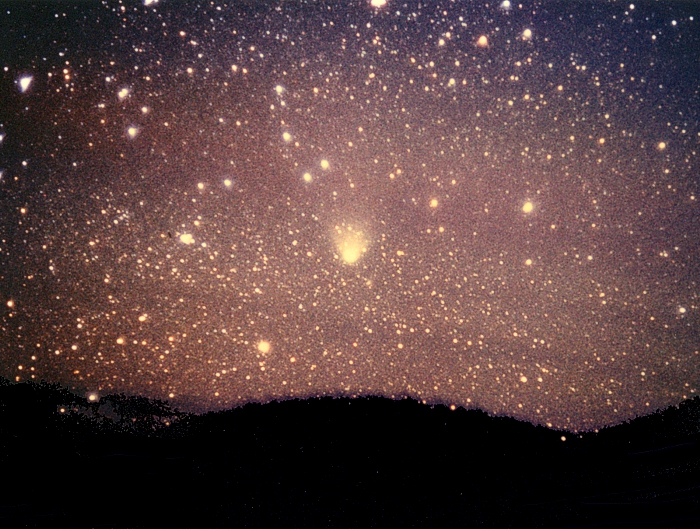 Mauna Loa and Kilauea in Hawaii’s Volcanoes National Park have been getting lots of media coverage because they’re erupting simultaneously — something that hasn’t occurred since 1984. That earlier dual eruption just happened to coincide with my September 1986 visit to Hawaii, where I planned to photograph Halley’s Comet.

This photo shows the comet in the constellation Centaurus. It’s the fuzzy object at the center. The comet’s tail is pointing away from Earth, so it appears foreshortened. Halley had reached perihelion in February of that same year. The other large fuzzy object (at 7 o’clock relative to the comet and just above the horizon) is the globular cluster Omega Centauri, a spherical cloud of several million stars some 17,000 light-years distant.

You may also notice a subdued reddish glow in the sky. That’s from lava in the caldera of Kilauea, which had been erupting since 1983. We set up the following evening at a slightly different location for more comet photos. Unfortunately, Pele had different plans. This was our view the second night: 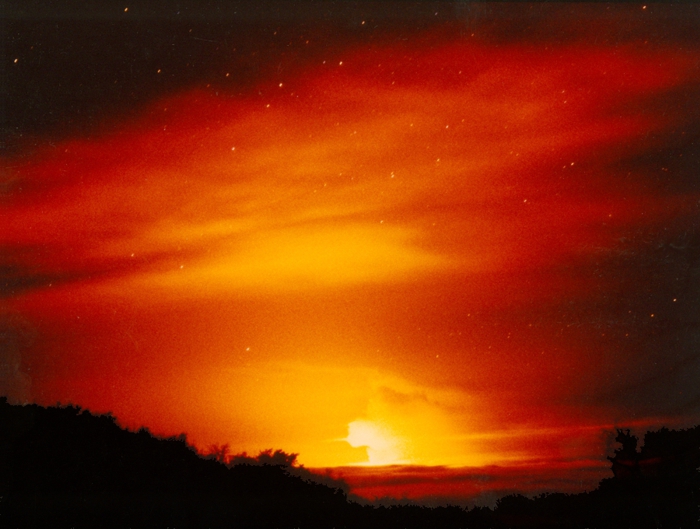 The clouds near the top are regular clouds illuminated by the glowing magma. Some of the lower clouds are smoke and ash from the volcano itself. We couldn’t see the comet at all, and only a smattering of the brightest stars were visible through the red glow. Needless to say, we didn’t get any more comet photos. We had to fly back to Arizona the next day. At least I got a great photo of Kilauea erupting.

Personally, I like my May 1986 photo of Halley better than what I got here. The tail angle is better and the sky is darker. That photo was captured at Walnut Canyon in northern Arizona.

Turns out double eruptions in Hawaii are not that uncommon. According to the USGS, there’s no evidence that one eruption can trigger the other, but since adjacent volcanoes often share the same lava reservoir at some depth below the surface, both can respond to a buildup of magma at nearly the same time. The dual eruption has nothing to do with climate change or other apocalyptic scenarios. It’s just volcanology 101.

Rant: I’m getting annoyed by the alarmist tone media has taken regarding “lava approaching an important highway” on the Big Island. It makes for a good photo-op, sure, but I’ve been on that highway. Along several stretches there’s hardened lava on both sides of the road. When lava does cover the road, repair crews simply resurface on top of the hardened lava. It takes a few days to repair the road, but there are other (albeit longer) routes to get around the island.

And now that the lava flow is encountering more level topography, it’s slowed down to around 50 yards/hour. At that rate it’ll take 3 days to cover the remaining 2 miles to the highway. And the lava will continue to slow as it cools and thickens, so it could be a week or more — or never. Lava flow speed in an inclined channel has been clocked at nearly 35 mph, but this Mauna Loa flow is now moving along more of a flat plain.