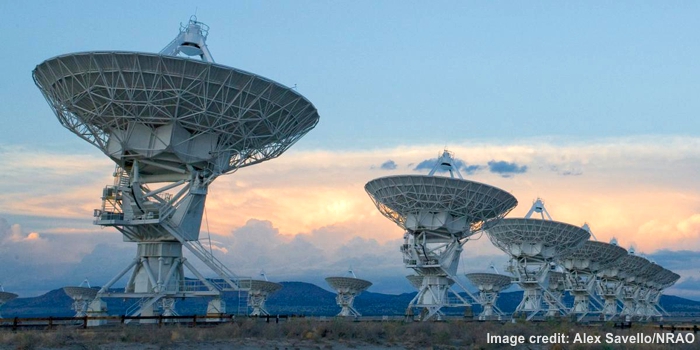 The Very Large Array (VLA) is an assembly of 27 interlinked radio telescopes. The instrument is at the National Radio Astronomy Observatory (NRAO) site near Socorro, New Mexico. Each antenna is 25 meters in diameter and weighs roughly 230 tons. They recently began listening for ET.

In February, 2020, the SETI Institute and the NRAO announced a collaboration that will add a new search instrument to the VLA’s signal processing system. It will run in parallel with the existing processing algorithms, so regardless what other research is ongoing, the SETI search can run 24/7. It should be fully operational by early 2023 and will be looking for techno-signatures — non-random signals unlikely to be of natural origin. The new system is called: Commensal Open-Source Multimode Interferometer Cluster Search for Extraterrestrial Intelligence (COSMIC SETI). It will be able to examine some 20 million star systems per year.

But before we continue, some historical background …

The search for techno-signatures is not new. It’s been going on in one form or another since Nikola Tesla’s 1899 investigations. But it didn’t get much scientific support until 1960, when astronomer Frank Drake launched Project Ozma. Since then, the number of experiments looking for techno-signatures has expanded, and the technology has improved in sensitivity and speed. If ET is out there, one would think that by now we’d have found at least one techno-signature.

In 1961 Drake introduced a formula for calculating N — the number of extraterrestrial civilizations in the Milky Way galaxy who produce detectable signs of their existence. His formula, which relies on 7 parameters, came to be known as the Drake Equation. None of those 7 parameters are known with certainty and most rely on “educated scientific guesses” rather then actual physical measurements.

For example, the parameter R* is the rate of formation of stars suitable for the development of intelligent life. Large stars don’t last long enough for intelligent life to develop, as they burn through their nuclear fuel too quickly — less than a million years in some cases. Biologists estimate the first single cell organisms appeared on Earth only after some 800 million years. Intelligent life came much later. The best measurement of R* at this time is 5-10 stars per year in the Milky Way. That range spans a factor of 2. The other parameters are even less certain.

The parameter fi is the fraction of life-bearing planets on which intelligent life emerges. Most scientists are fairly certain that life of some form exists elsewhere in the Milky Way, and believe that given the right conditions, the evolution of life from inorganic materials is almost spontaneous. But they’re talking about basic single-celled organisms. The evolution of intelligence (in a form we would recognize as intelligence) is not well understood — even here on Earth. Estimates for the value of fi vary much more widely than those of R*.

Drakes surveyed scientists across a range of disciplines for their thoughts about the 7 parameters. When he calculated N based on their responses, the most pessimistic value was N = 1, implying that Humankind is alone in the Galaxy and we’ll never detect ET. The most optimistic values yielded N = 10,000, but in those cases the parameter L (the average length of time intelligent civilizations produce detectable signals) was assumed to be 10,000 years.

There’s several possible reasons why an advanced civilization might stop producing signals. They may have transitioned to non-electromagnetic communication systems undetectable by radio telescopes. They may have decided, for whatever reason, that they didn’t want to be detected and taken appropriate measures to hide their existence. Or they may have gone extinct.

Earth broadcast its first detectable radio signals in 1897 when Guglielmo Marconi transmitted his “wireless telegraph” across the English Channel. That was 125 years ago, so humankind has thus far achieved L = 125. That means radio evidence of our existence has propagated outward 125 light-years in all directions. Within that range are approximately 117,000 stars, most of which probably have planets.

Even with N = 10,000, the odds that a detectable civilization is among those 117,000 stars are only 0.000117% — the Milky Way is estimated to contain 100 billion stars. Detectable evidence of our existence hasn’t spread very far, so we have a better chance of finding them than they have finding us. And that is why SETI exists.

In 1950 physicists Enrico Fermi and Edward Teller were discussing the then-hot topic of UFOs and the possibility of faster-than-light travel through space. Fermi famously asked the question “Where are they?” Given the estimated N = 10,000, he was puzzled by the absence of techno-signatures. This question became known as the Fermi paradox, and still has no consensus solution.

Many solutions to the Fermi paradox have been proposed, but a recent paper by Jonathan H. Jiang et al. (2022) gives me pause for concern. It’s a long read at 11 pages, and uses a lot of scientific jargon, but I link to it here for your reference. I’d recommend you read at least the abstract:

Central to the paper’s argument is the concept of a Great Filter, a generic term for major events that may set a limit to the length of L and thus reduce our chances of making contact. The Great Filter could take many forms: nuclear warfare, artificial intelligence (AI) gone awry, meteorite impacts, pathogens and pandemics, and climate change. What the paper asserts is: Regardless of how advanced a civilization becomes, they are still subject to termination by a Great Filter.

The authors point out that, even in a civilization that has banished war and developed methods for averting meteorite impacts, there is still a risk of events caused by the civilization itself. I’m not so much worried about nuclear warfare (despite Putin’s threats) or hostile AI or meteorite impacts, but there’s still two forms of the Great Filter that concern me: pathogens and pandemics, and climate change.

If L is indeed shorter than most assume, and a Great Filter can be caused by the civilization itself, then Earth (with its current L= 125) may be closer to a Great Filter than expected. Earth has experienced Great Filters in the past that eliminated large numbers of species. Of course, human civilization arose subsequent to the last event — the Eocene-Oligocene transition some 34 million years ago. Humankind has not yet faced a Great Filter.

Or are we facing it now in the form of pandemics and climate change? That both are occurring is hard to dispute. And both are driven primarily by population growth — Earth’s population reached 8 billion last month, is expected to peak at around 10.4 billion people during the 2080s, and will remain at that level until 2100. Beyond that the models are uncertain.

Pandemics are being caused by the expansion of humans into previously uninhabited land where they come into contact with new pathogens. Simultaneously, pathogens are expanding their geographic range because of global warming. The climate crisis was caused by humankind’s increasing demand for energy, food, and land. Estimates for the Earth’s maximum sustainable population center around 10 billion. The fact that there is a maximum on finite planets was made clear by Robert Malthus in 1798.

The paper concludes with the implication that we haven’t detected any extraterrestrial civilizations because, even if they do (or did) exist, civilizations that reach the detectable stage of development are inherently unstable or prone to subject their biosphere to unsustainable practices. Could it be what we see playing out on our planet plays out the same for all civilizations that attain detectability? Could L be that small?

That’s a pretty dismal conclusion but, fortunately, it’s not the only explanation for the Fermi Paradox. In the article I cited earlier, the first “solution” to the paradox is the one I believe to be correct. My “best guesses” for the parameters of the Drake Equation yield N = 10. The Milky Way is a big place, and if you distribute those 10 civilizations randomly around the galaxy the average distance between them is around 45,000 light years. So any signals we detect would have taken 45,000 years to get here.

During my teen years I recall “upgrading” from a pocket 10-transistor radio to a plug-in radio with vacuum tubes inherited from my grandfather. I ran a 60 ft long single conductor in the attic for the antenna. With greater sensitivity and amplification, all those stations whose radio waves were already present but undetectable suddenly became detectable — some from close to a thousand miles away. This is what SETI researchers are hoping for with their upgrade.