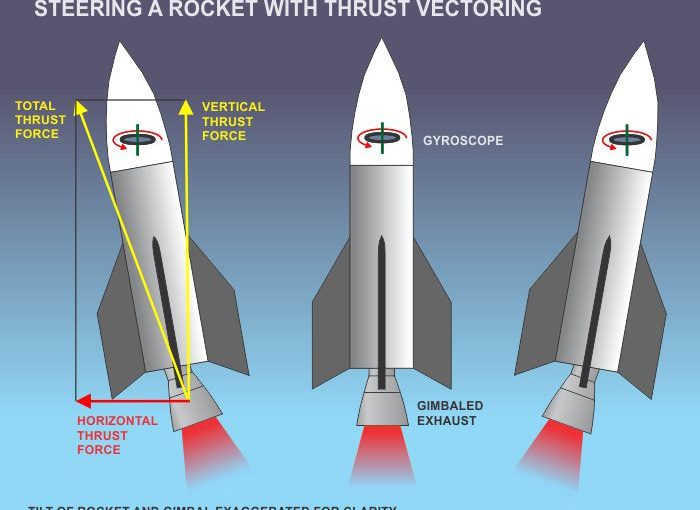 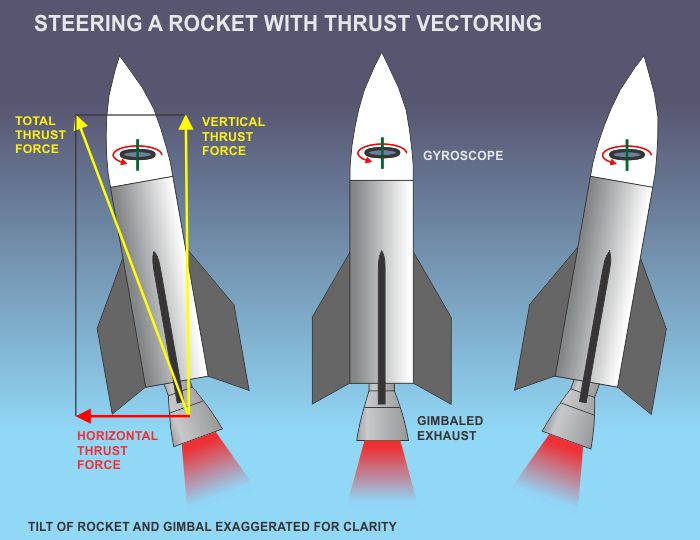 Question: I’m wondering how rockets manage to stay pointed upward after they launch? You’ve pointed out in several posts how the winds at different altitudes blow in different directions at different speeds. So what keeps the rocket from getting tipped over by these winds? — TD, Lompoc, CA

Answer: For readers who didn’t see those posts, TD is referring to How They Steer Hot Air Balloons and Meteor Trails. Yes indeed, the winds can vary greatly at different altitudes, and they definitely exert sideways forces on rockets. Another source of imbalance (on multiple-engine rockets) is slight variations in the thrust from different engines. Rocket engines are designed to produce a specific amount of thrust, but they’re not perfect.

To correct for these imbalances rockets use what are called gimbaled exhausts on their engines. This allows the thrust to be pointed in different directions as needed. The graphic shows how it works. The process is referred to as thrust vectoring, and it’s also used in some high-end fighter aircraft like the F-22 Raptor. It’s also common on jet boats.

In fighters and jet boats thrust vectoring is controlled manually by the pilot to execute turns. In rockets, the control is automatic and handled by an onboard inertial navigation system (INS). Early systems were based on a physical gyroscope spinning at high RPM. As you probably know, spinning gyroscopes don’t like to tilt. So if the rocket tilts for whatever reason, the gyroscope will remain spinning in a horizontal plane.

As shown in the graphic, this changes the gyroscope’s orientation relative to the rocket. Even slight tilts can be picked up by optical or mechanical sensors. The tilt reading is input to an onboard computer that then tilts the exhaust gimbals to compensate. This all happens nearly instantaneously and that’s what keeps the rocket pointed straight upwards. Modern INS is based on optical gyroscopes which are far more accurate and robust.

At the dawn of the space age, in the 1950s and 1960s, INS was still being developed and tested. Here’s a launch from the early 60s that went wrong. It’s a bit grainy but that looks like an early model Atlas rocket. You’ll see it tilting back and forth shortly after launch. Eventually, the INS overcompensates and the rocket, subject to lateral forces is wasn’t designed for, breaks apart:

INS is more sophisticated these days, but things can still go wrong. Here’s a 2013 launch of a Russian Proton heavy-lift rocket. In this video you can see the thrust vectoring in action. Watch the direction of the exhaust change as the rock starts to tilt. Ultimately, it too breaks apart and crashes to the ground. From the delay between explosion and boom, it crashes about a mile from the camera:

An impressive demonstration of functional INS can be seen in the next video. It’s a 2021 launch of an Astra rocket, one of the newest privately owned spacefaring companies. Just after takeoff one of its 5 engines fails, causing an immediate extreme tilt to the right. This is quickly corrected by vectored thrust to the left. The rocket returns to vertical, but the leftward thrust pushes it to the right horizontally for close to a quarter mile.

With one engine gone it doesn’t have sufficient thrust to gain altitude. Eventually it burns enough fuel to reduce its weight to the point where the remaining 4 engines can push it upward. This launch was aborted shortly thereafter since the rocket could not have reached orbit with the fuel remaining:

Of course, rockets aren’t meant to stay vertical throughout their entire ascent. Most are programmed to start tilting after a point in order to achieve a circular orbit around Earth. The only exceptions would be some sounding rockets designed to simply sample or take measurements through a cross-section of the atmosphere. These rockets can return to near their launch site via parachute, and are much smaller than the rockets seen in these videos. Their size makes them less vulnerable to winds, and they’re single engine rockets, so they don’t need INS. Much like fireworks rockets, stabilizing fins will keep them pointed upward.

Interestingly, there’s a rudimentary INS built into most smartphones these days. It’s a mechanical system based on strain gauges. This is how your phone knows whether it’s being held in portrait or landscape orientation, so it can automatically rotate the display.

Next Week in Sky Lights ⇒ Where Is ET?

The Case Against Dusk-to-Dawn Yard Lights
Where Is ET?
HOME