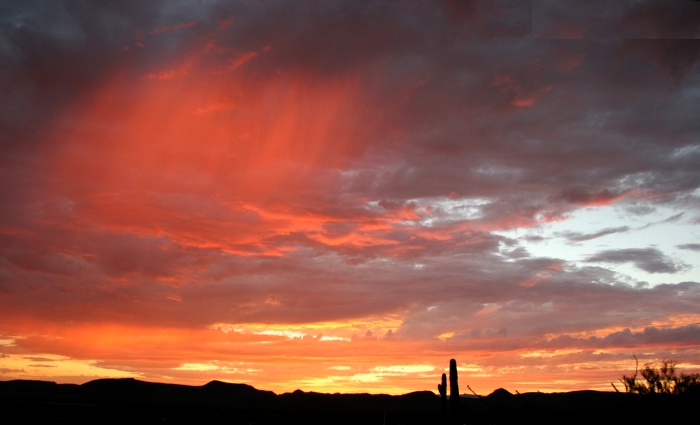 Of course clouds can’t “burn” — they’re made of water. But during this recent sunset they sure looked like they were burning. I’ve seen sunsets with deeper shades of red, however the “burning” cloud in this case appears against a darker cloud that increases the contrast. Those faint vertical striations that look like “flames” might be virga, or possibly just a chance cloud structure.

The Rayleigh scattered orange light is coming from below that lowest dark layer of clouds, where the Sun has already set. The “burning” cloud is actually quite low in the sky, exposing it to this orange light. Here’s another photo zoomed in to the sunset point just left of those two saguaros: 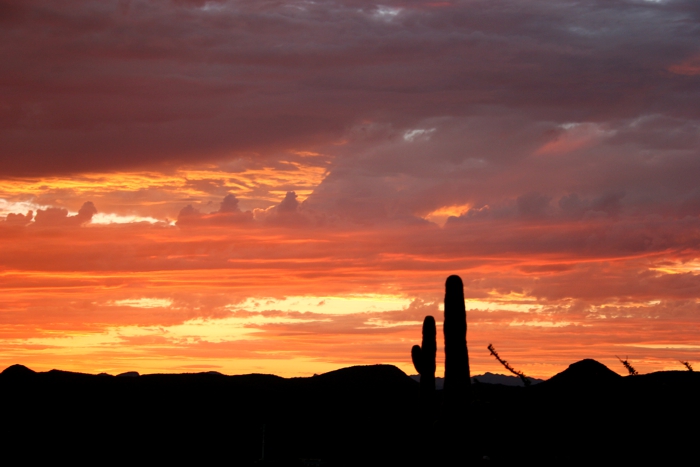 Sky Lights readers have seen many sunset photos spanning a range of topics from pareidolia to wildfire smoke to “just a pretty picture.” One of the main reasons Arizona has such beautiful sunsets is the amount of dust in the air. Even on calm days, very fine dust remains suspended in the atmosphere and enhances Rayleigh scattering.

The day before these sunset photos were taken, we had an extreme wind advisory related to a monsoon storm. Gusts in the 50 mph range were predicted, and my weather station reported a peak gust of 76 mph — the highest ever seen since a 72 mph gust over 20 years ago. It’s worth noting that 74 mph qualifies as Category 1 hurricane force winds. I have to say it got a bit scary for awhile. Winds were sustained in the 60 mph range for nearly half an hour. This was the view to the west: 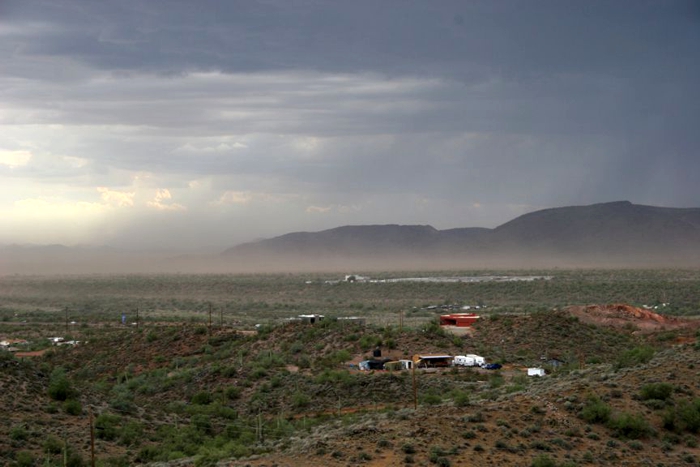 We never got any rain with that windstorm, which would have washed most of that dust out of the air. So I’m sure that dust contributed to the “burning” cloud sunset. It also contributed to the air quality alert broadcast that day. Desert dust contains spores and pollen, like dust anywhere, but because of exposed dirt in construction areas it also contains very fine silicate particles that can harm your lungs.

I’ve written about construction dust. It’s a real problem in this fast growing state. There are laws on the book requiring dust suppression protocols. Alas, they are not regularly followed or enforced because of the power wielded by Arizona’s developers.

Q&A: The Pillars of Creation
The Case Against Dusk-to-Dawn Yard Lights