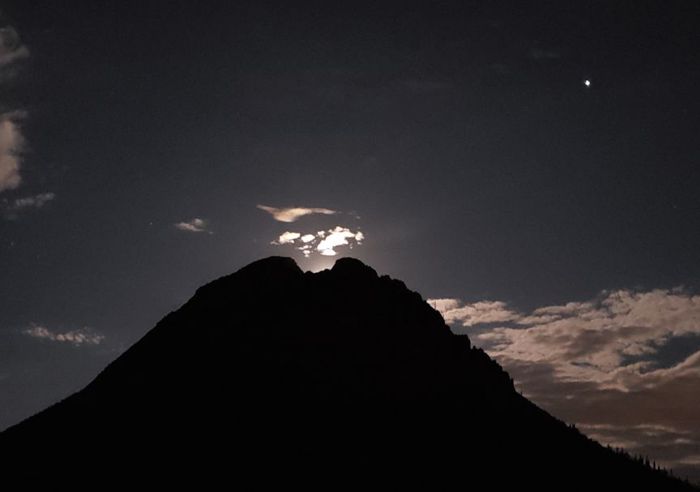 Over the last few weeks I’ve received a dozen queries asking “What is that really bright star in the east right after sunset?” The answer: It’s not a star — it’s the planet Jupiter making one of its closest approaches in 60 years. On September 26, 2022, at opposition, Jupiter was a “mere” 367 million miles (591 million kilometers) from Earth. That’s 6% closer than its average opposition of 391 million miles, so it’s exceptionally bright (magnitude −2.5) and will remain a great target for binoculars through most of November.

After a good friend mentioned it during a phone call I went outside to check for myself, promising him a photo (above) of what I saw. Coincidentally, that was on Oct 9 when the Hunter’s Moon (first Full Moon in November) was rising. The view was striking, as the Moon had not yet cleared Gavilan Peak and was illuminating some wispy clouds in the background. Jupiter is clearly visible at upper right.

A few minutes later the Moon cleared the peak and pretty much washed out my view: 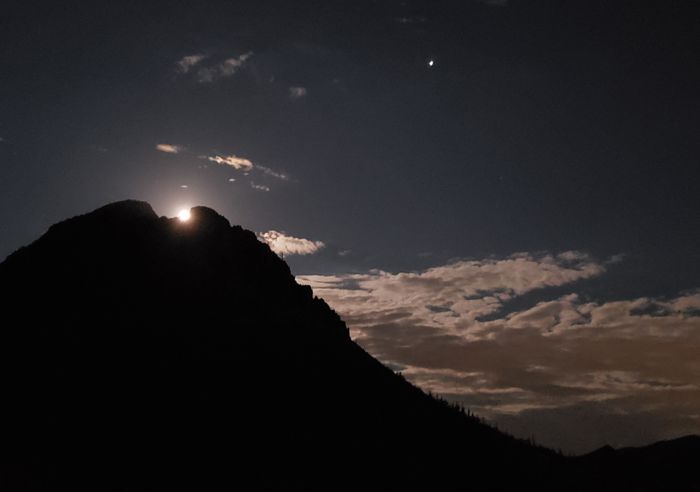 FYI: A year normally has one Full Moon each month, and the names of those moons (at least in western culture) are mostly derived from Anglicisations of Indigenous names. They entered the vernacular through early versions of the Farmers Almanac.

But because the Moon takes 29.5 days to orbit the Earth, and the months don’t all have the same number of days, every 2–3 years there will be two Full Moons in the same month. The second of those Full Moons is called the Blue Moon. And in case you were wondering, yes, that is the etymology behind the common phrase “once in a Blue Moon.”

If you have binoculars I urge you to take a look at Jupiter. Even at 10X magnification you’ll be able to see a few of Jupiter’s moons and some banding in the planet’s clouds. A steady tripod is highly recommended. Under good clear skies this is how it can appear:

You won’t always see all four of the brightest moons, as sometimes a moon is behind or in front of Jupiter. And if you do see all four, they won’t necessarily be in this position. They’re recognizable because they all line up parallel to Jupiter’s equator. Any other nearby dots are likely just background stars.