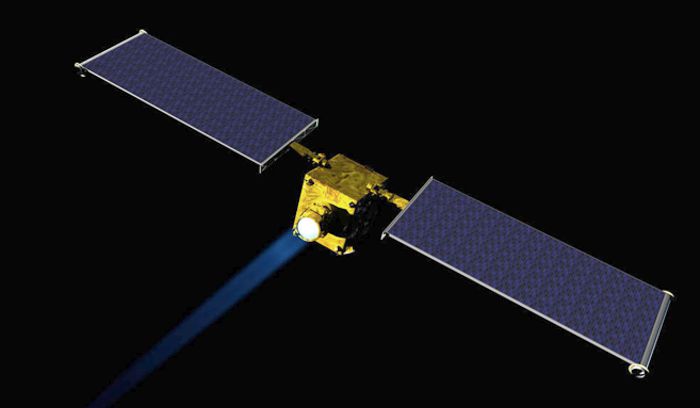 Question: I watched that NASA broadcast of the DART [Double Asteroid Redirection Test] mission. The view of the asteroid was pretty cool. What I don’t get is how this could work as “planetary defense” if all they were trying to do was, in their words, “nudge” the asteroid. — CL, Fort Dodge, IA

Answer: The short answer is: If you “nudge” it when it’s still very far away, you don’t need much to make it miss Earth. Think of it like trying to make a very long putt in golf. On an otherwise perfect putt, if the ball hits a stiff blade of grass just inches from the hole it’ll probably still drop. But if it hits that stiff blade 30 feet from the hole, the slight deflection could cause a miss.

The video (actually a time-lapse with images taken every second) shows the final 15 seconds of the DART mission on Sep 26, 2022. It was launched Nov 24, 2021, and after a 10 month journey to beyond the orbit of Mars it slammed into Dimorphos, a satellite of the larger asteroid Didymos. DART’s speed at impact was an incredible 6.1 km/s (3.8 mi/s). To put this all into perspective, let’s first take a look at DART itself:

Now let’s take a look at the relative sizes of the bodies involve (including a few others for comparison) in this graphic provided by NASA-JPL. The text is a bit small, but you can click on it to enlarge: 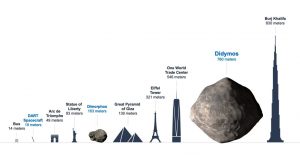 Perhaps this makes it more clear just how much of a “nudge” DART could apply to Dimorphos. Dimorphos has an estimated mass of 5×109 kg, and an orbital speed = 0.174 m/s, giving it a momentum around 200 times that of Dart. Nonetheless, Dart’s 3.36 × 106 N⋅s of impulse should change the speed of Dimorphos by:

Dimorphos is currently in a near-circular orbit with eccentricity 0.03. The slight slowing of Dimorphos will cause it drop into a new obit with a periapsis (point of closest approach to Didymos) lower than in its original orbit. Here’s a diagram of that orbit change: 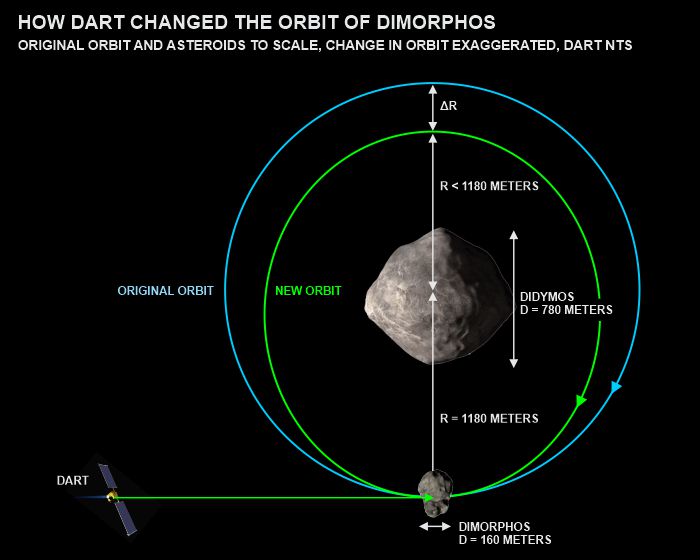 That’s the minimum speed change expected based only on conservation of momentum. With that alone, the 11 hours 55 minutes it takes Dimorphos to complete one orbit should decrease to 11 hours 45 minutes — a 10 minute reduction of its orbital period. But the effect could be even greater.

The biggest unknown is the physical composition of Dimorphos. DART is expected to create a crater when it hits, and with its 10 × 109 joules kinetic energy it could eject 10–100 times its own mass into space. This would act like the thrust from a rocket and could further slow Dimorphos.

If Dimorphos were a solid rocky body there’d be less ejecta. But from the last images sent by DART, it looks more like a “rubble pile” loosely held together by gravity. The initial images of the impact show a huge cloud of ejecta, so DART may have been even more effective than hoped for. We await telescopic measurements confirming the change in orbital period.

LATE EDIT: Results from data just released show that the orbital period of Dimorphos was reduced to 11 hours 23 minutes. That’s a change of 32 minutes, which falls within the range of modeled scenarios, but it’s on the high end. Scientists are ecstatic, as these results bode well for planetary defense.