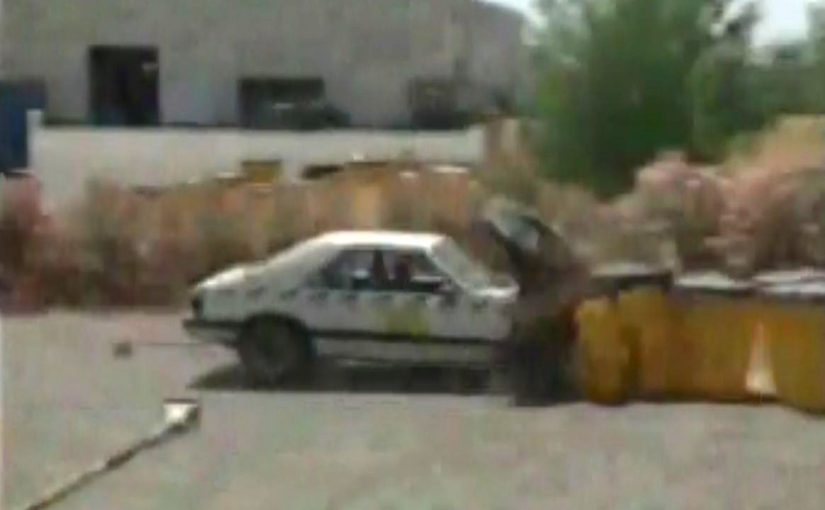 Question: I often see what looks like plastic barrels lined up against the supports below overpasses along the highway. I’ve been tempted to pull over and check them out but I might get a ticket. I’m guessing it’s some kind of safety feature, but don’t know for sure. What are those things? — IDF, Daytona Beach, FL

Answer: You are correct. Those barrels are a safety feature. They’re usually made of plastic to be more flexible. And if you did stop to look (which I don’t advise) you’d find them filled with water or foam. The video above shows them doing what they are designed to do: Bring an errant vehicle to a stop gradually rather than suddenly. They are officially known as impact attenuators, but many people just call them “crash cushions.”

They work because of the law of Conservation of Momentum, first explained mathematically by Sir Isaac Newton in the late 17th Century. That law is expressed as:

Let’s do a rough calculation for this crash video assuming a typical highway speed of 65 mph (30 m/s):

That’s the momentum of the vehicle is it moves down the road. If we change that momentum to zero by bringing the vehicle to a stop, the impulse (FΔt) applied must be equal to 60,000 N·s (the units for momentum and impulse are mathematically equivalent).

So the force involved in that collision would be: F = p/Δt = 60,000 N·s / 0.9 s ≈ 67,000 N (15,000 lb). With airbags and properly restrained occupants the collision is survivable. My calculation provides the average force, but in a real collision the force varies over time.

Without an impact attenuator the collision would be over in a much shorter time. The concrete supports will easily withstand the impact of a vehicle. So the collision is over when the vehicle’s crumple zone reaches maximum crumple. In that case, Δt could be as short as a few hundredths of a second, and the force would be proportionally larger. Airbags and restraints would not be much help. Here’s a great example:

You likely already know that a fall on turf hurts less than a fall on concrete. That’s the same physics in action. And you may have heard of egg drop contests where students design containers for a raw egg and drop it from increasing heights until the egg breaks. You need to understand the physics of collisions to design a winner.

Passenger vehicles get safety ratings based on crash tests like the first video. And automotive engineers know how to do the physics. If you are in the market for a new vehicle it’s well worth your time to check those ratings. You can find those ratings at: https://www.nhtsa.gov/ratings

Next Week in Sky Lights ⇒ Kaguya Shoots the Moon