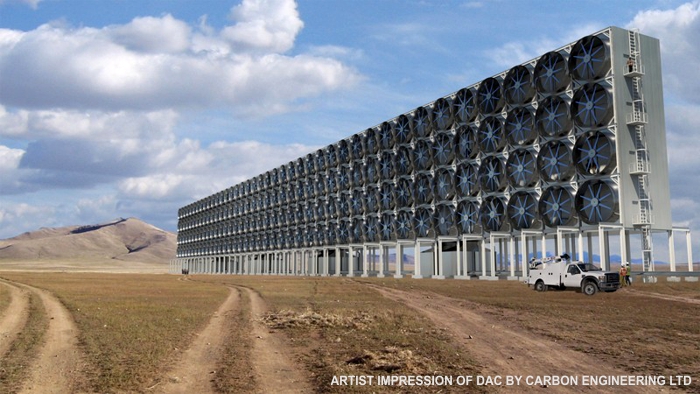 Question: I’m hearing a lot about “carbon capture” lately as a method for mitigating climate change, and I’d like to know more about how that works. Is it something I can do as an individual, maybe by installing special filters on my car’s tailpipe or the flue from my furnace? How does it actually work? — AR, Green Bay, WI

Answer: First, what you’re hearing about is actually “carbon dioxide capture” — the element carbon by itself is a relatively harmless substance. Carbon dioxide (CO2) is the problem, as it’s one of several greenhouse gases that contribute to global warming.

Your desire to participate in carbon capture is commendable, but unfortunately this is not something that can be done on a small scale. What makes the news are huge industrial-scale operations that require major investments and innovative engineering. At this time, only a few small pilot operations are in progress.

The graphic above is an artist’s rendering of Carbon Engineering’s design for what they call an “air contactor” designed to extract carbon dioxide from the atmosphere. The process is called direct air capture (DAC), one of several different carbon capture strategies. Graphic credit: Carbon Engineering Ltd. They claim the unit pictured could perform the work of 40 million trees! Here’s how it works …

The fans pull air into the system where it flows over a solution of potassium hydroxide (KOH) that reacts with the carbon dioxide in the air, trapping it in the form of a carbonate salt. After processing the salt into pellets, the product is then heated to release the CO2 in a highly purified form that can either be used in industrial processes (such as carbonating beverages) or injected deep underground where it eventually combines with minerals to form carbonates (this is called carbon sequestration). The chemical reactions are well-understood. But the process requires a lot of energy to operate, and of course that energy would have to come from renewable sources.

A growing number of climate scientists are of the opinion that, given the current lack of significant progress away from fossil fuels, some type of carbon capture will be needed to meet the timeline suggested by the Intergovernmental Panel on Climate change (IPCC). The graphic below shows what needs to happen by the year 2100. The timeline is approximate, and there are a LOT of uncertainties involved: 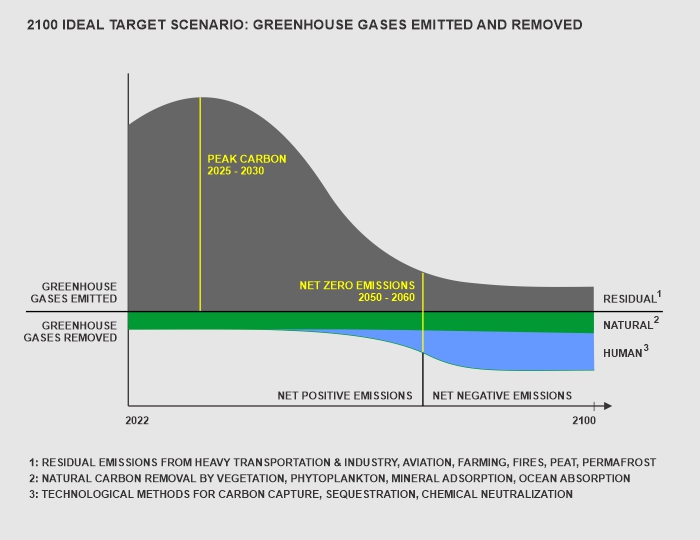 The blue region shows the amount of carbon dioxide that will have to be removed by human technologies. There are several other methods beyond DAC. Carbon capture and storage (CCS) is technology designed to capture carbon at its source — think smokestack scrubbers and catalytic converters. Afforestation, the opposite of deforestation, is reflected in the diagram as a gradual widening of the green region. Despite what you hear about deforestation happening now in many parts of the globe, there is optimism the overall trend can be reversed. There are also companies researching chemical methods to incorporated captured carbon into concrete where it would be permanently confined.

It’s important to note that, until we get to the point of net zero emissions, the amount of CO2 in the atmosphere will continue to increase. Only after net zero will the amount of CO2 start decreasing. If we can achieve the balance aimed for by 2100, there’s a good chance we can avoid a climate catastrophe. Even then, the weather will continue to exhibit the instabilities we’re already seeing well beyond the net zero point.

Unfortunately, carbon dioxide is not the only greenhouse gas. There are also:

These gases are present in smaller quantities than carbon dioxide, but their ability to trap heat in the atmosphere is much greater. Controls are already in place to limit their emission, but this is mainly in the developed world. And some of the methane production is out of our control in warming peat bogs, and melting permafrost and sea floor clathrates.

DAC is a great idea whose time has come, in my opinion. It’s way less risky than some of the geoengineering proposals bandied about, like seeding the atmosphere with substances that reflect sunlight, or forcing algae blooms in parts of the ocean by fertilizing it with iron particles. DAC is eminently scalable and can be built anywhere open land is available. The best locations would be where renewable energy is plentiful and steady, since unless DAC runs on renewables, it would contribute to the problem it’s trying to solve.

Next Week in Sky Lights ⇒ Forces During Crashes