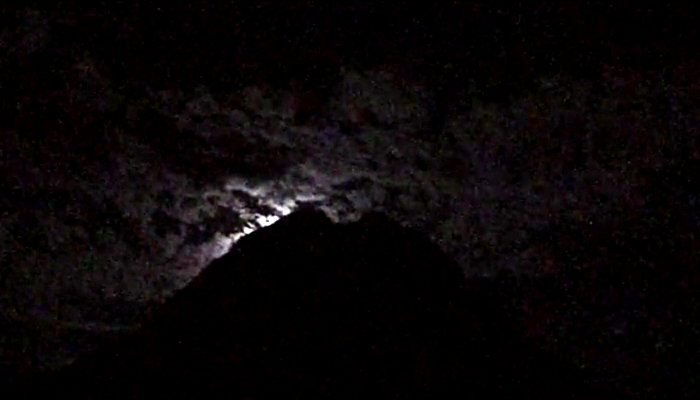 This video was shot on Sep 20th, 2013 using my now-obsolete Sony camcorder. It’s been in my “questionable” folder all these years because the video was a fail. My digital planetarium (then an old app called Sky Globe) had predicted the Full Moon would rise around 10 pm right in the saddle between Gavilan Peak’s dual summits. As you can see, the alignment was off by around two Moon-diameters (1.0°). These days I use Cartes du Ciel (Sky Chart) which is accurate to fractions of a degree.

At first I was going to delete the file, but when I compressed the 57 minute video to around 2 minutes (speed up factor 32X) the movement of the clouds and the interplay of diffused and reflected moonlight was just too cool not to share. Plus, we can learn something about a phenomenon called parallax: the shift in an object’s relative position caused by a change in the observer’s position. Parallax is relevant to astronomy as well as photography, so it’s worth discussing.

This graphic shows our local topography. Note that, though the two peaks and saddle appear symmetric in the video, the western peak is actually lower by 37 meters. The fact that it’s closer by 184 meters makes it appear to be equal in height to the east peak. The available baseline for observations from my yard spans 35 meters in the N/S direction. For the video I had the camcorder set up around the center of that baseline (because that’s where a concrete pad is conveniently located).

The position of the Moon relative to those peaks is a function of my location on the baseline — changes in my position cause changes in the peaks’ positions relative to the Moon. The Moon, being optically located at infinity, doesn’t (much) change position. In the video, the Moon was “off” by only 1.0°. But depending on my position on the baseline, the Moon’s position could be shifted by as much as 2.7°. Based on the graphic above, here’s the math …

First we need the line-of-sight distance to the east peak accounting for its vertical distance above me. That’s just the Pythagorean Theorem:

Then we need to calculate θ, the skinny angle of the triangle:

So I could have gotten the moonrise I sought by shifting my camcorder 5–6 meters south along the baseline. Of course, hindsight is always 20/20. The rising Moon appeared to be on track at first, but toward the end when the clouds started brightening in the wrong place, I was debating whether to move the camcorder. Alas, I trusted Sky Globe and got burned.