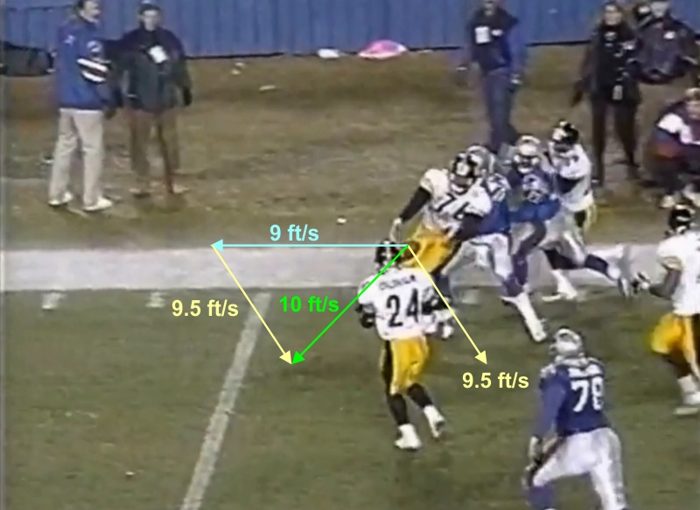 Credits: I thank the NFL, the Steelers, the Patriots, and the Fair Use Act for allowing me to show this clip of a single play for educational purposes. Otherwise, as they claim …

“This telecast is copyrighted by the NFL for the private use of our audience. Any other use of this telecast or any pictures, descriptions, or accounts of the game without the NFL’s consent is prohibited.”

The video shows an attempted lateral after an interception. At first glance it seems like a well-executed play. But after reviewing the replay, officials ruled the ball moved forward relative to the field and thus was not a lateral — it was an illegal forward pass. Watch the slo-mo replay (from a different camera position) and you’ll see the ball’s trajectory is indeed at a downfield angle relative to the 15 yard line.

Steeler Kevin Henry, who intercepted Drew Bledsoe, attempted to lateral the ball to Orpheus Roye. You can see in the replay that Henry clearly throws the ball backwards relative to himself — Roye is 1–2 feet behind Henry when the lateral is tossed. But Henry failed to take into account his own motion relative to the field.

By counting the yard markers and frame numbers on this 30 fps video I was able to measure Henry’s speed parallel to the sideline. He was doing 12 ft/s over the last 4 yards, but slows slightly just before the lateral. I’d estimate his speed was 9 m/s at the moment he made the toss.

The lateral itself covered a distance of 6 ft in 0.6 s, giving it a speed of 10 ft/s (relative to the field). My estimate for the angle of the ball’s trajectory = 30° downfield (relative to the 15 yard line).

Now that we’ve got some rough numbers we can diagram what happened during that lateral. We’ll use the graphic method of vector addition: 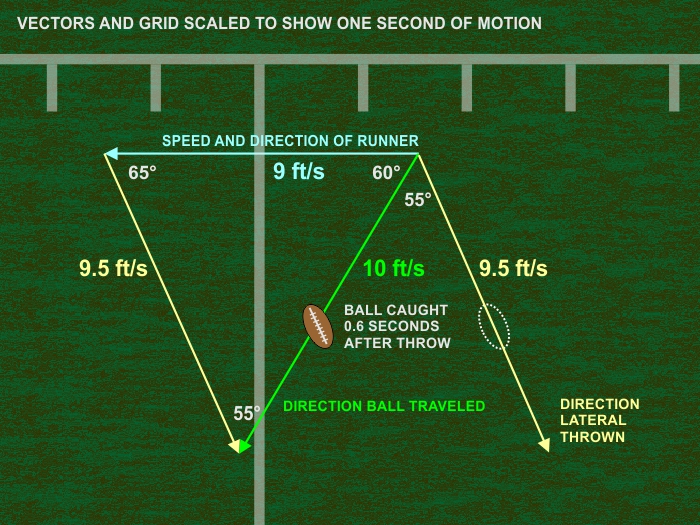 Using the data we can construct a triangle and solve for the missing parts using SAS (side-angle-side) analysis. There’s equations to do that, but the math isn’t really relevant to my point. Instead, I used this handy Triangle Calculator to solve for the unknown side (the direction and speed of the lateral relative to Henry).

This isn’t the first (or last) time a lateral was judged to be an illegal forward pass. Watch this play. Now that the NFL added overhead cameras, plays like this are less likely to be miscalled. An overhead view is the ultimate adjudicator. Other camera angles can distort the geometry. But in both plays cited here, there was a camera view sufficiently perpendicular to the sideline to decide the correct call.

FYI: Vector addition is a useful tool for analyzing a surprisingly wide array of phenomena: throwing or firing things from or at a moving object, powered flight through a crosswind, bunting a baseball, rim-outs in basketball, and boating in a current, to name just a few.