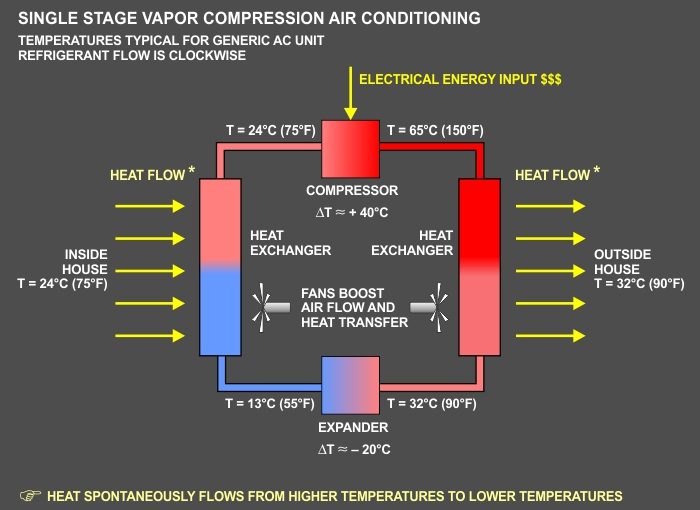 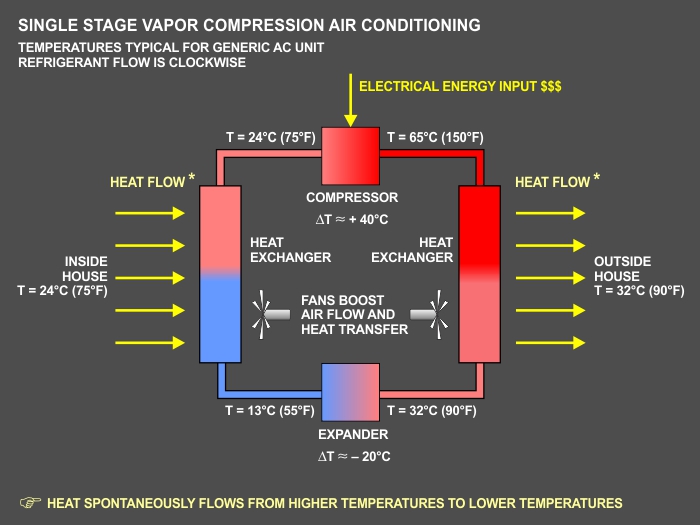 Question: I’ve lived in the Seattle area for like 20 years without air conditioning. But the last few heat waves were unbearable, so we decided to bite the bullet and buy an AC. Just a one-room unit for our bedroom, not the whole house. When I started shopping online I realized I know nothing about this technology. I’m not that great at science, so could you give me a simple explanation of how air conditioning works? And also, what should I be looking for when I shop? Many thanks! — IMH, Bellevue, WA

Answer: Sure thing IMH. First, what I’m going to say about AC applies not only to window units, but also to whole-house units, heat pumps in refrigeration mode, and even the one in your car. The graphic shows what happens in a typical single-stage unit. Take some time to study it, and note what happens to the temperature of the refrigerant, usually a gaseous hydrofluorocarbon (HFC), at each of the four stages in the cycle.

The key principles that allow AC to work are:

There are scientific laws for gases and heat flow that express the same thing with equations, but in simple terms here’s how AC works: Electrical energy input to the AC is used to compress the refrigerant to a point where it’s hotter than the air outside. This is what allows it to lose heat to the air. When the refrigerant is subsequently expanded its temperature drops to below that of the inside air, allowing it to cool your house.

We can also look at the process using what is called a PV diagram. It shows what happens during the four stages of the AC cycle. This might be more difficult for a non-scientist to understand, but it shows how the system can be modeled as a closed loop on a graph of the refrigerant’s changing pressure and volume.

Note: EVAPORATION and CONDENSATION refer to the refrigerant’s phase change between liquid and gas as it’s cooled and heated. AC would still work if the refrigerant remained in a gaseous state throughout the cycle, but not nearly as well. The phase change is more effective for transferring heat since it takes advantage of the latent heat released or absorbed when the HFC condenses or evaporates — around 200 kJ/kg (100 BTU/lb). 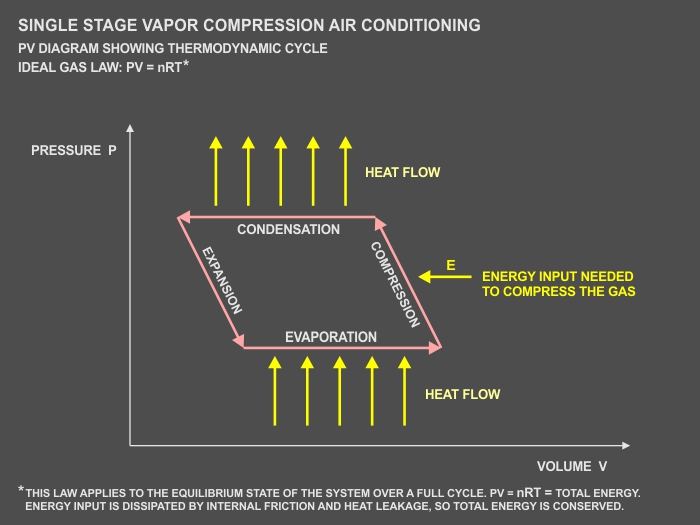 Your second question is a lot easier to answer. Here’s the main things to consider when purchasing AC: