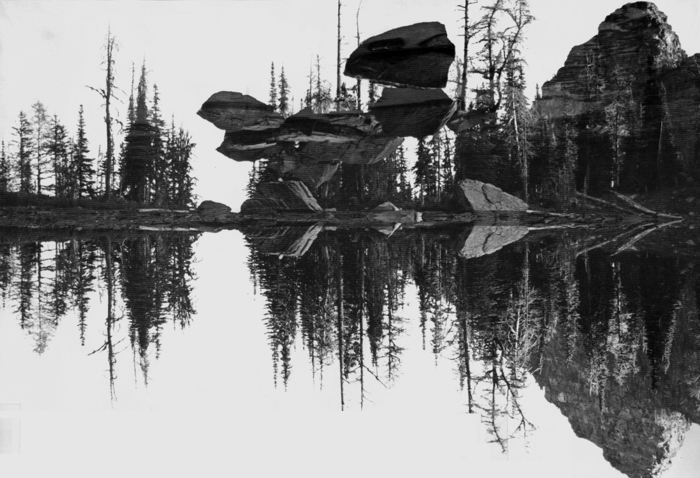 When the rocks are porous, helium can build up inside internal cavities. At some point, depending on the weight of the rock itself, the rock can become buoyant (like a solid helium balloon) and rise a short distance into the air. But this can only happen if the rate of helium buildup exceeds the rate of escape through cracks and fissures.

The photo above shows five rocks levitated about six feet above the lake. It’s more common for the rocks to rise from the lake bed and simply float on the surface. But in this case, the rate of helium buildup was so great the rocks actually lifted above the water. I shot this photo from the east bank of the Columbia River near the small town of Radium Hot Springs, just west of Calgary, British Columbia.

a.k.a mercury thallium calcium barium copper oxide with a critical temperature of 139 K (−134 °C) at normal atmosphere pressure. That’s a long way from “room temperature.” But it’s still pretty cool (no pun intended) to see an inert object being levitated. In the following demo the cooling agent is liquid nitrogen at a temperature of 77 K (−195.8 °C). The floating magnets are an alloy of neodymium, iron, and boron. The superconductor (black square below the magnets) is made from yttrium barium copper oxide (YBCO) with a critical temperature of 92 K (−181 °C). Behold levitation:

Disclaimer: The rocks in my photo are not superconductors. Nor are they filled with helium. The photo is real, but it’s been flipped upside-down to make the reflections in the water look like levitating rocks. To see the original right-side-up photo click here.

This isn’t an April 1st post, so why am I doing this? My first three paragraphs “explained” in detail how rocks can float — even to the point of choosing a likely-sounding (but fake) geographic location. Sky Lights is always about the truth. Truth is, I’m running an experiment on disinformation.

The provocative title is intended to attract searches by eccentrics. The scientifically challenged may find this page, but read it only to the point where it gets technical. Maybe paragraph four. They’ll never get to this disclaimer. My apologies to regular readers, but I doubt any were fooled by my pseudo-explanation.

I’ll give the “floating rocks” a couple months to disperse around the internet. No idea if they’ll become a meme, but it’ll be interesting to see where and how this disinformation shows up. It’s easy to find if the photo has been stolen using Google Image Search. Or maybe it’ll be in the form of links to this post, or some of those first three paragraphs copied and plagiarized. I’m curious to learn more about how disinformation spreads, and which internet channels are most at fault. Results will be shared in a future post.

Image credit: It’s not my photo. The photo is from a 1980s issue of Physics Teacher magazine. Teachers were encouraged to post the photo on their bulletin board along with a provocative caption to see what kind of reaction it would generate in curious students. I use that image here in the same spirit.

Next Week in Sky Lights ⇒ How Air Conditioners Work