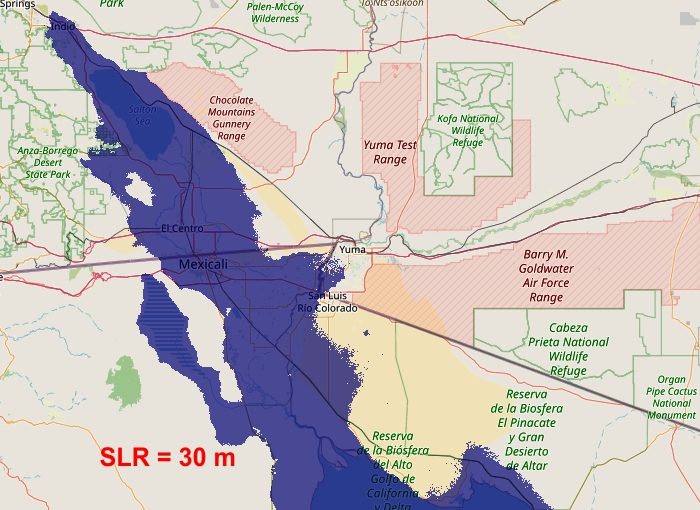 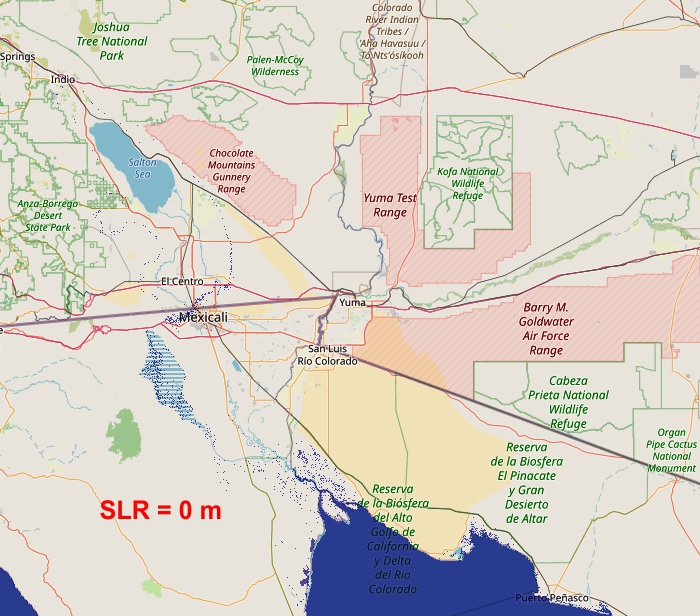 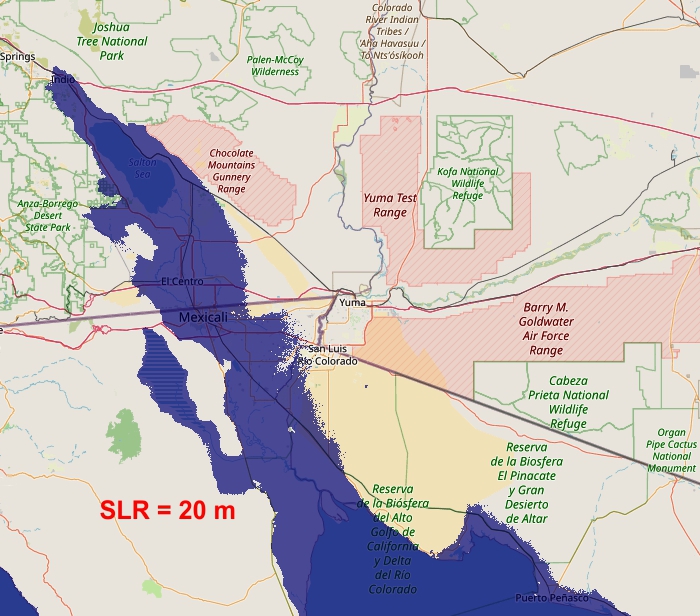 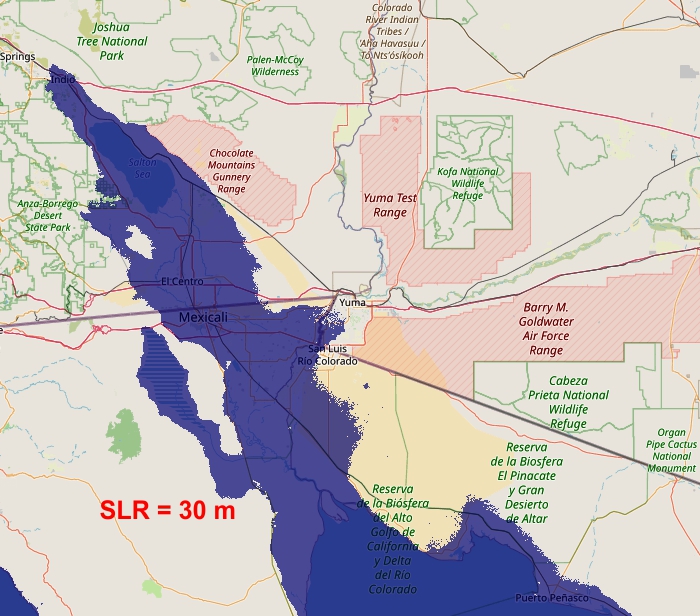 Question: I hear people joke about how, with the ice melting and sea level rising, at some point there will be oceanfront property available in Yuma. Buy the land now while it’s cheap! Is that for real? Yuma isn’t anywhere near the ocean, like say San Francisco or Miami. — KL, Scottsdale, AZ

Answer: If the ice keeps melting, at some point in the future Yuma will have a beach. No idea how long that might take, but if ALL the ice in glaciers and Antarctica melted, scientists estimate sea level will rise by 70 meters (230 feet). You are correct that Yuma “isn’t near the ocean” but it is up-river from the Colorado River estuary. That provides a relatively gentle slope for the Sea of Cortez to climb as sea level rises.

The slideshow compares current sea level (0 meters) to 20 meters and 30 meters of sea level rise (SLR), illustrating the changes in coastline along the northern shore of the Sea of Cortez. As of 2022, the Colorado River rarely reaches the sea. It ends in a marshy area some 20 miles inland. But as you can see, with 20 meters of SLR the Sea of Cortez expands inland far enough the engulf the Salton Sea. That creates a LOT of new beachfront property in California and Mexico, and maybe some marshland near the Arizona border.

At 30 meters SLR Arizona would have around 15 km (10 miles) of beachfront on the Sea of Cortez. It wouldn’t actually be within the city limits of Yuma, but would be along the suburban area just west of the city. It’s a greater slope upward along the Colorado River valley than it is toward the Salton Sea, so it takes that extra 10 meters SLR to climb that slope.

If you want to see where the coast would be at even higher SLRs (up to 60 meters), or explore the effects of SLR on other locations, go to:

and experiment with their interactive map. Map programmer Alex Tingle accessed the NASA database of global surface elevations and used the API for OpenStreetMap to create this informative online tool. I thank Alex for permitting the use of these images. Here is the requested attribution:

Of course, with 30 meters SLR, beachfront property will be the least of your concerns. Take a look at what 30 meters SLR would do to Florida, Europe, and Southeast Asia. Many Pacific islands would be underwater. The Mediterranean coast would be totally reshaped. Higher elevation cities such as Denver, La Paz, Bogotá, and Mexico City, would survive the flooding.

Earth’s oceans currently cover around 71% of its total surface area. If all the ice melted that would increase to 91%. The graph cited in that link includes terminal basins with elevations lower than 70 meters (such as the Qattara Depression in Egypt and the Dead Sea between Jordan and Israel). These basins are cut off from the sea by mountain ranges higher than 70 meters and would not be affected by SLR. So let’s round that 91% down to 85% (my estimate based on this map).

Unfortunately, that 15% of submerged land will be along coastlines, and 40% of the worlds population lives within 100 km of a coast. So you see what I mean about beachfront being the least of your concerns — coastal infrastructure (ports and harbors) would be destroyed, and mass migrations of humans and wildlife away from the coast would tax surviving infrastructure.

So yes, we might end up with a beach in Yuma, but that’s with an SLR of 30 meters. If all the ice melted, Yuma would be underwater and southwest Phoenix would have a beach.

Next Week in Sky Lights ⇒ Maximum Range of a Cannon

Eclipses and the Line of Nodes
Q&A: Maximum Range of a Cannon
HOME