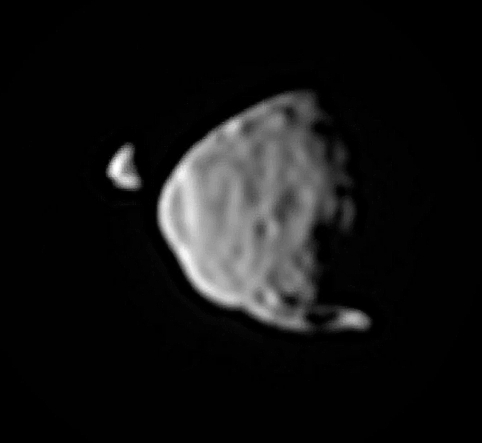 Question: I read your post about the Phobos eclipse and wondered if they ever got video of a Deimos eclipse. After a quick search I found one online. Not nearly the quality of the Phobos eclipse but still cool to see. Then I wondered if maybe Phobos ever eclipses Deimos but couldn’t find anything anywhere. Do you know of such a video? — MTM, Burbank, CA

Answer: Yes, and you are looking at it (above). It was a little harder to find. And like that Deimos eclipse video (provided below for readers who haven’t seen it), the quality is nowhere near that of the Phobos eclipse captured by NASA’s Perseverance rover. This eclipse was captured in 2019 by NASA’s Curiosity rover using a lower resolution camera and neutral solar filter — same as the filters in those cardboard “eclipse glasses”.

All these Martian eclipse videos were produced by Mark Lemmon/NASA/JPL/MSSS/Texas A&M. You can read more about the project, and see Curiosity’s version of a Phobos eclipse, here:

While we’re on the topic of Martian moons, let’s take a closer look at Deimos and Phobos. NASA’s HiRISE camera aboard the Mars Reconnaissance Orbiter captured this high-resolution image of Deimos. The smallest craters visible are around 200 meters diameter: 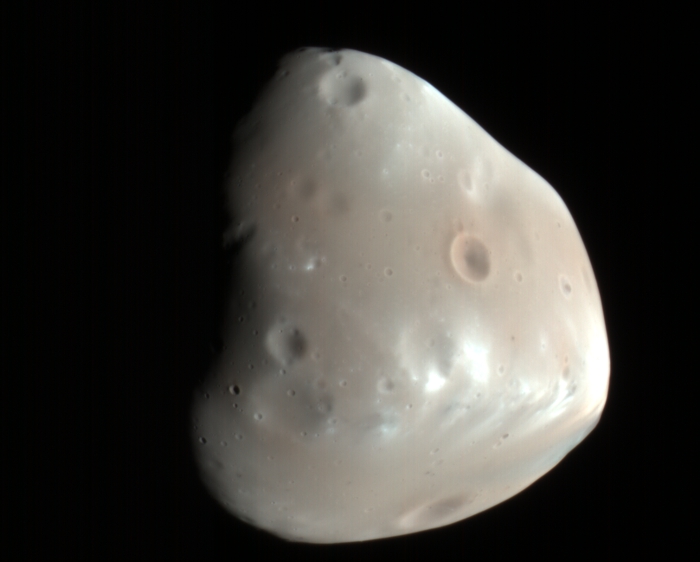 Phobos, the larger of the two moons, is also an irregular body with dimensions 27 km × 22 km × 18 km. Here’s the HiRISE image of Phobos: 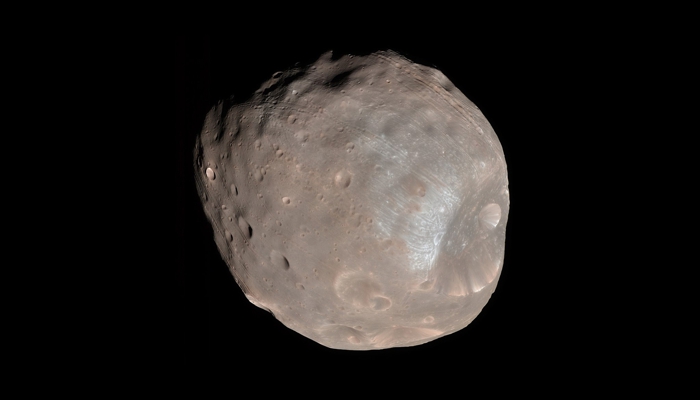 NASA’s interactive 3D model of Phobos can be found here:

Both moons orbit Mars almost exactly above its equator. So as seen from the surface, Phobos (which is closer to Mars) will sometimes pass directly in front of Deimos. This graphic shows the planet and its moons’ orbits to scale: 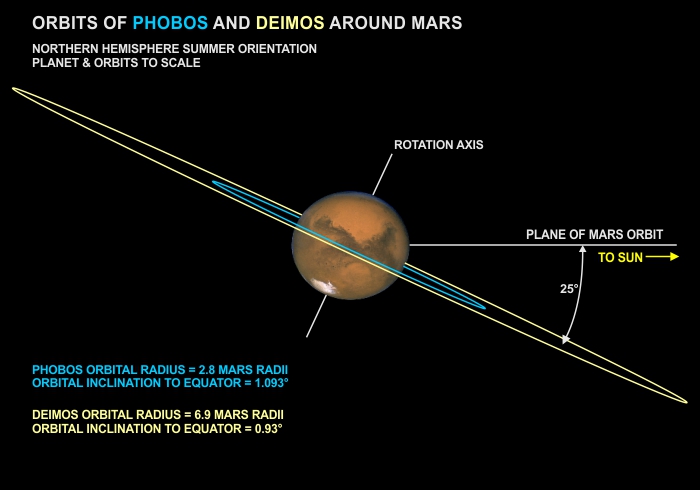 The orbital plane of Deimos is inclined 0.93° to the plane of Mars’s equator. That of Phobos is inclined 1.093°. With a difference of only 0.163° the orbits appear coplanar at the scale of this graphic. And since Phobos, the closer moon, has an angular diameter of 0.26° when overhead (0.18° when rising or setting), it can easily eclipse 0.04° diameter Deimos. In fact, for observers near the Martian equator (like most of NASA’s rovers), eclipses of Deimos by Phobos occur every 10.25 hours.

Technical Note 1: We probably shouldn’t be calling this an “eclipse” since that term refers to something passing in front of the Sun. More properly: Phobos occults Deimos. Occultation is a more general term used when one celestial body blocks the view of another. For example, Earth’s Moon often occults bright stars or planets, an event of scientific interest to astronomers and fun to watch through a telescope. And asteroids often occult stars.

When the orbits of Phobos and Deimos are oriented as shown above, solar (and lunar) eclipses are not possible. Because the moons orbit almost exactly above the equator, eclipses are only possible when Mars is near an equinox as shown below: 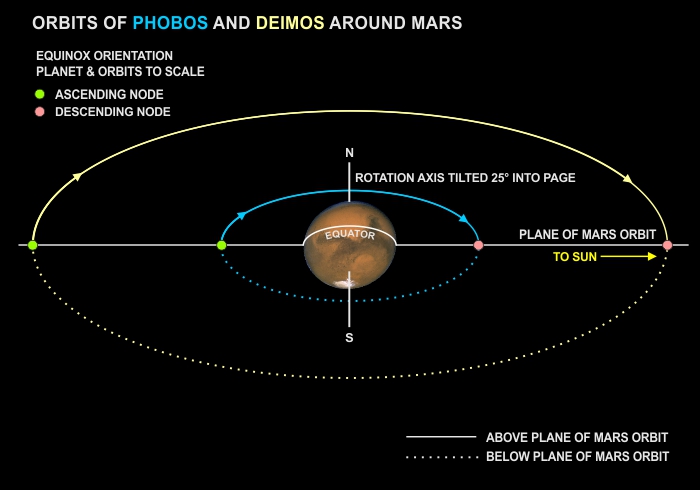 Technical Note 2: We also shouldn’t say Deimos “eclipses” the Sun. More properly, Deimos transits the Sun, as Venus and Mercury occasionally do for observers on Earth. Likewise, we can sometimes observe the ISS transit the Sun and Moon. And the ISS has on at least one occasion transited a comet.

Next Week in Sky Lights ⇒ Eclipses and the Line of Nodes