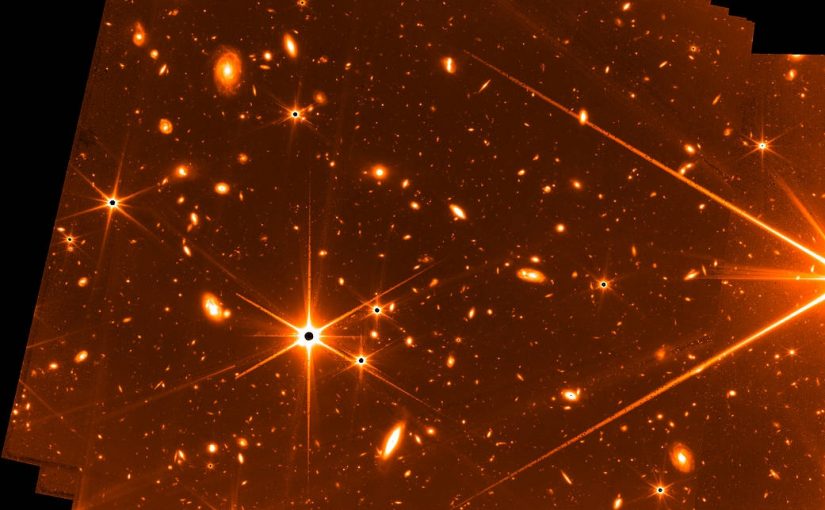 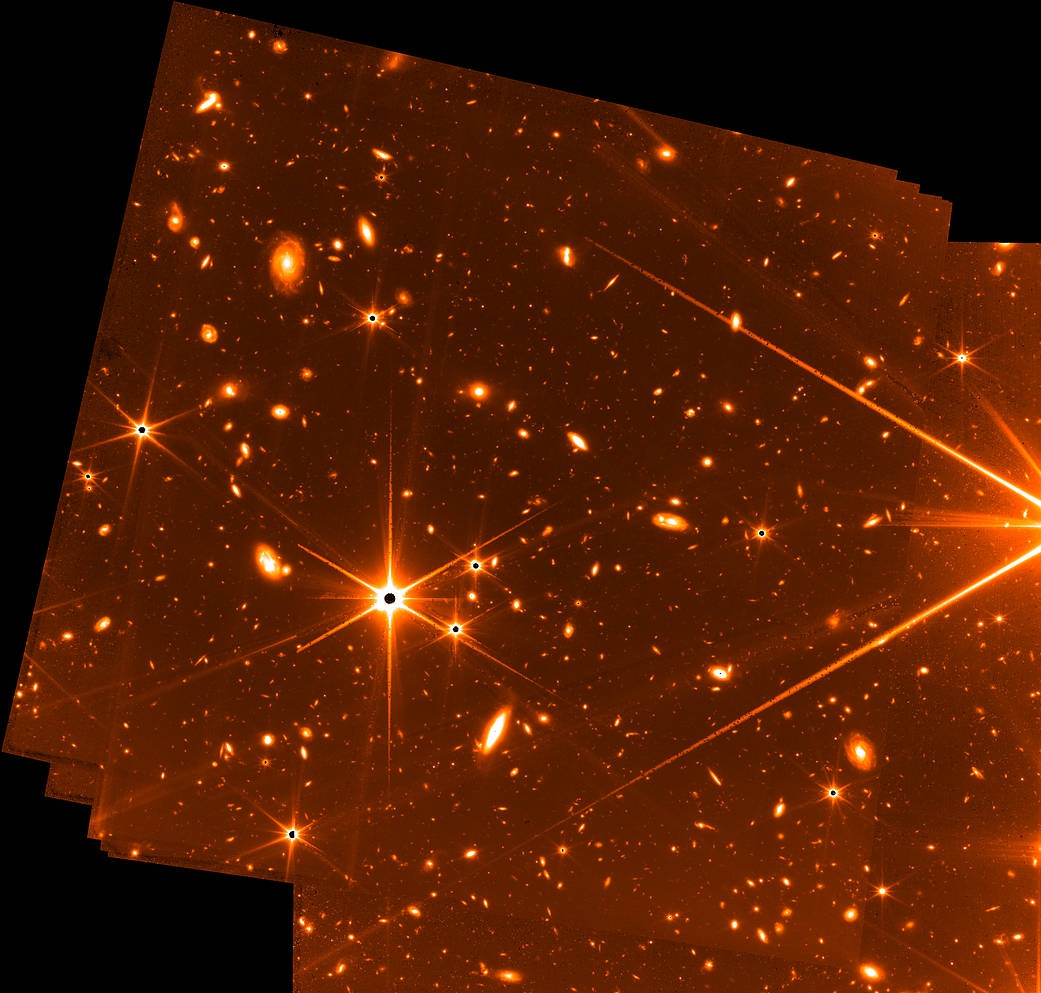 Question: I’ve been seeing this new photo from the James Webb Space Telescope all over online. I get that it shows “lots of galaxies very far away” but astronomers already knew that, right? So what’s the big deal? And why do some of the galaxies have spikes? — JH, KC, MO

Answer: Popular media does a poor job with scientific news. Few reporters have the background to tell the story in sufficient depth. The image you saw online was probably a cropped version of this one. I guess producers don’t like content with empty black spaces where they can’t advertise. 🙂  Click on the image to see it full size.

That image is a composite of 72 overlapping exposures totaling 32 hours spanning 8 days in early May. If you look closely, you can see the overlapping edges of individual exposures. Visible in this image are the following:

Unlike the HST, JWST is not orbiting Earth. Space is too “hot” in that location for its sensitive infrared cameras to operate. The sensors would be saturated by heat from the Earth, Moon, and JWST itself. Instead, they sent it out to a point called “L2” — one of five Lagrange Points in the Sun–Earth system. These are points of gravitational stability where very little fuel is required to maintain a spacecraft’s position.

L2 is 1,500,000 km from Earth. With the 5-layer sun screen deployed JWST’s cameras can cool down to -225°C (-370°F) and operate with maximum sensitivity. The Sun, Earth, and Moon are all in the same direction from L2, so the sun screen blocks their combined heat radiation. If you rated the sun screen as a lotion, it would have an SPF of 1,000,000. In testament to its effectiveness, its outermost layer heats to a temperature of 85°C (185°F). 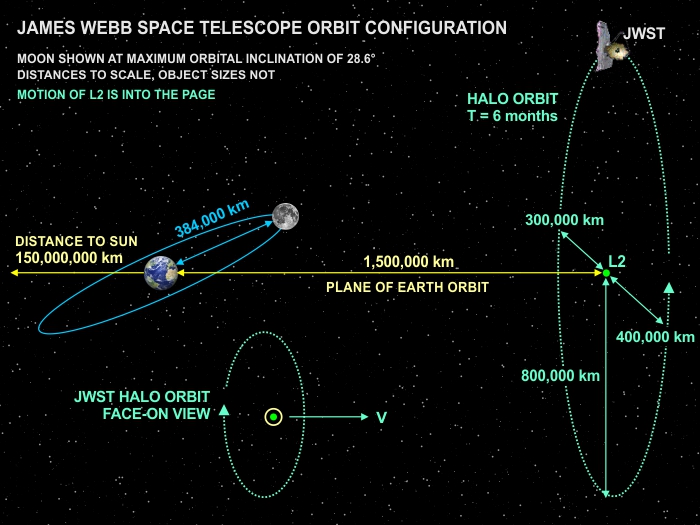 Although it would be possible to position JWST exactly at L2 (which is a point lying in Earth’s orbital plane), mission planners chose to place JWST in a halo orbit around L2. This is another gravitationally stable configuration with minimal fuel requirements. Follow that link to see a cool animation of the orbit.

The halo orbit accomplishes two things: First, it prevents the Sun ever being eclipsed by the Earth or Moon, which would reduce the power output of JWST’s solar array. The diameter of Earth’s penumbra at L2 is only 26,800 km. The Moon’s penumbra sweeps a path around Earth’s penumbra adding its own 7300 km of shadow along the perimeter. But that’s as seen from L2 — JWST is well outside these shadows, even at its closest approach to L2.

Second, L2 itself is unique, but different halo orbits can be used to allow other spacecraft to anchor at L2. In fact there are currently two other spacecraft sharing L2: the ESA Gaia probe, and the Russian-German Spektr-RG.

The JWST power system is designed to compensate for inevitable degradation of its solar panels by radiation and micrometeors. Its 2 kW array provides twice the power actually needed. The array is attached to one side of the base structure visible left of the sun screen: 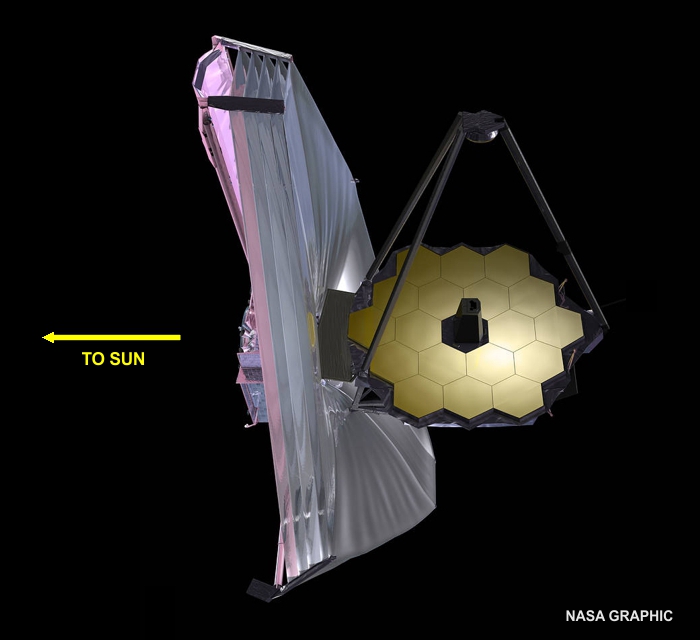 The next images we’ll see from JWST promise to be spectacular and will surely advance our understanding of the cosmos. As NASA Administrator Bill Nelson put it: “JWST will answer questions we don’t even know how to ask yet.”

Next Week in Sky Lights ⇒ Deimos Eclipsed by Phobos