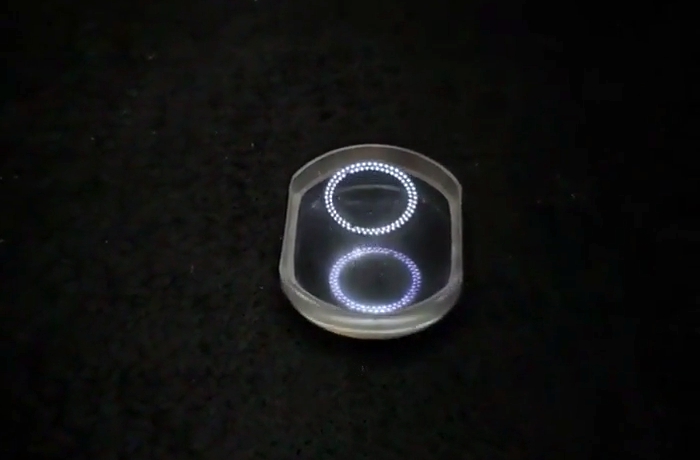 I was at my workbench changing the batteries on a remote. There was the cap from a spray can of contact cleaner off to the side. As I worked, my peripheral vision picked up something moving above the work surface. When I focused on it, it appeared to be a grayish mote of dust, or maybe a small flying insect, hovering just above the cap of the spray can. I reached for it and grabbed thin air.

When I moved my head to view it from different angles, the mystery object shifted in position correspondingly. But it wasn’t actually moving on its own. That’s when I realized I was seeing a real image of the overhead light source somehow projected by the interior of the cap. The video above shows what it looked like after I moved things around to get the optimum effect.

As you can see, the cap was made of a shiny light-gray plastic and was fairly reflective. The rounded edges on the inside top surface of the cap formed a crude approximation of a concave mirror. Here’s how a concave mirror can create a real image: 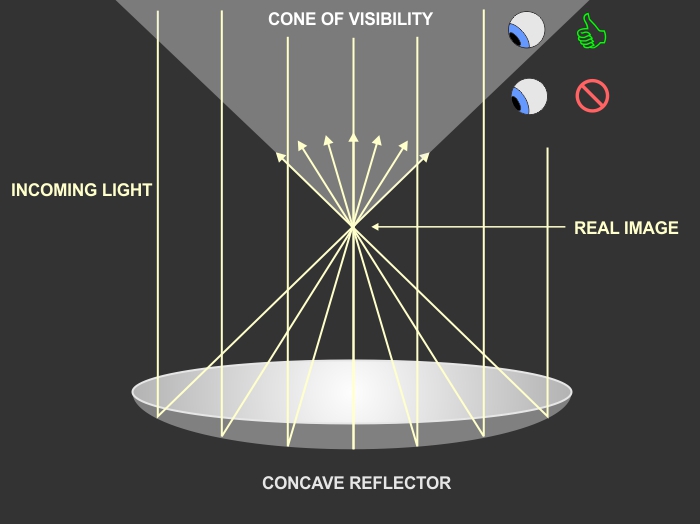 The real image is a point in space where light rays diverge from a common source — same as they would from a real physical object located at that point. Note that the eye (or camera) must be within the cone of visibility, the geometry of which is determined by the diameter and focal length of the reflector. To show this effect more vividly I used the top surface of a high-quality concave lens as a reflector, and a laser pointer for the source. Near the end of the video you’ll see the green dot disappear as the camera approaches the edge of the cone of visibility:

One of the most remarkable things about real images is how, under the right conditions, they can appear as extended 3-dimensional objects. The following video uses the circular LED light above my work bench as the light source and the same concave lens reflector. The second image below the real image is a reflection from the flat bottom surface of the lens. That one is a virtual image, same as what you see in a normal mirror. The actual light source is a ring of 120 LEDs with a diameter of 8 inches — its real image is around 0.5 inches in diameter, but it clearly resolves each individual LED:

As long as we’re on the subject of real images, here’s an insight into how telescopes, binoculars, and microscopes operate … “floating” just inside the body of the instrument is a real image of whatever is being observed. That image is produced by the primary (either a lens or curved mirror). The eyepiece of the instrument acts as a “magnifying glass” to enlarge that image for your eyes. We can do that literally with the image of the LED light:

With most telescopes, and some binoculars and microscopes, the eyepieces are removable and can be replaced with others of higher or lower magnification as needed. And yes, if you remove the eyepiece and hold a magnifying glass in its place, that works too.

Similarly, if you remove the eyepiece and place your eye so that its pupil intercepts the cone of visibility, your eye’s own lens will project that image onto your retina. However, it’s difficult to get close enough to the image given how most optical instruments are constructed, and it may be difficult to focus at that short distance.

Happy July 4th to my readers in the USA. If you didn’t get to see any real fireworks, for whatever reason, I hope this “light show” was an enlightening replacement.

Next Week in Sky Lights ⇒ Extreme Tides in the 2030s