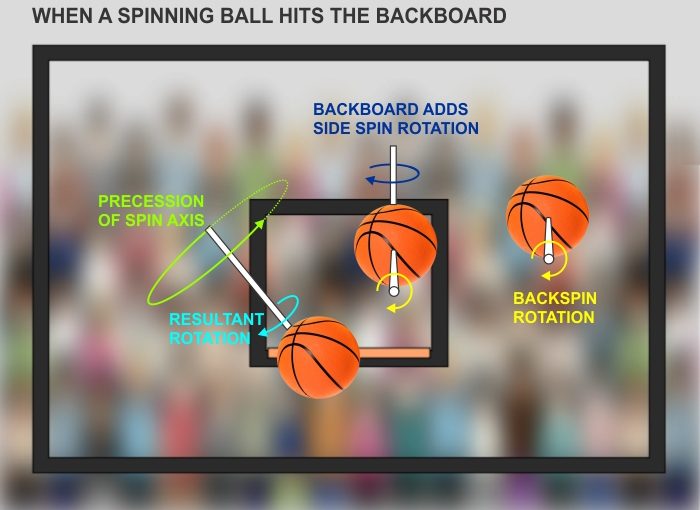 Question: During the NBA playoffs I have observed, on multiple occasions, a basketball come back out of the bucket after it had gotten more than halfway below the rim! I know what I saw, but have no idea how that can happen. Once the ball is below the rim it seems impossible it could come back out. I’m sure there’s a scientific formula that explains it but I don’t speak math. Can you explain it in simple terms? — CB, Leeds, AL

Answer: That’s a tough challenge but I’ll give it a shot. You are correct that a basketball can be more than halfway through the hoop and still come back out. The reason why is spin — it would be impossible for a non-spinning ball to do that. The animation above shows what typically happens on a non-swish basket. I’ve slowed it down so you can see what happens to the spin.

The ball originally has some backspin imparted by the shooter. The ball hits the far side of the rim which both increases its spin rate and bounces it toward the near side of the rim. This is the critical point where the ball’s increased spin could possibly kick it back out, as happens in the following animation:

The outcome is determined by forces acting on the ball when it hits the near side of the rim. We can represent forces by vectors (arrows) showing the direction the forces act, with the length of the arrows proportional to the amount of force — e.g., an arrow twice as long means twice as much force. This is a type of math called vector addition, but instead of doing any calculations, the force vectors are combined by connecting them end-to-end while preserving their lengths and directions. You don’t really need to “speak math” to combine forces.

In this slideshow we represent the resultant (combined) vectors in red, and that resultant determines the ball’s motion. Switch back and forth between the two slides and note how the 3 contact forces contribute to the resultant. The resultant is determined by stacking the other vectors tail-to-head: 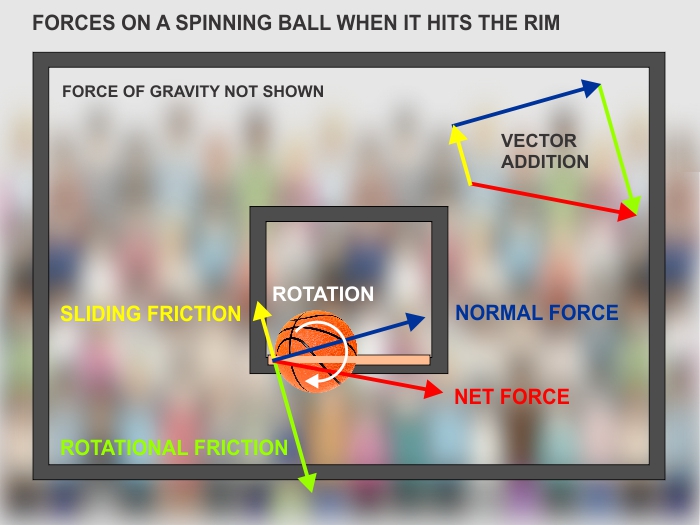 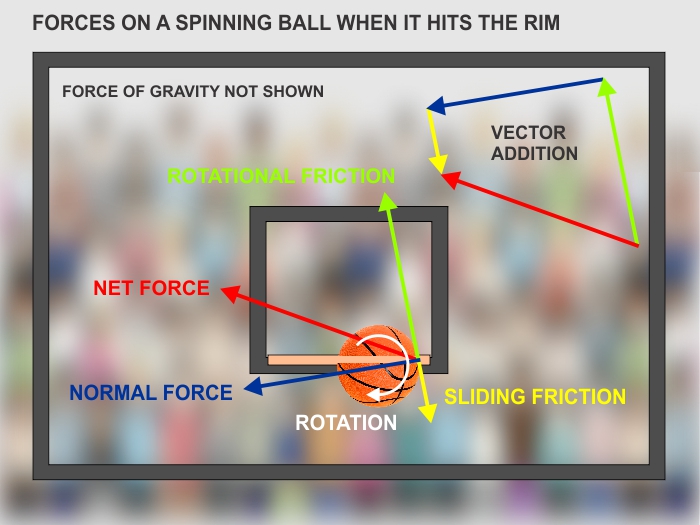 So it’s all about the spin and what that rotational friction force contributes to the total. Faster spins result from a glancing impact with the far rim, and/or a faster initial backspin by the shooter. Even when the ball is more than halfway through the rim, a fast enough spin can kick it back out.

That’s hopefully a non-mathematical answer to your question. It’s restricted to a simple 2-dimensional analysis of a straight-on shot from the baseline, but shows the basic science involved. In practice, I think I see more basketballs rim out when they first hit the backboard and/or glance off the inside edge of the rim. When this happens, the ball starts spinning around more than one axis simultaneously: 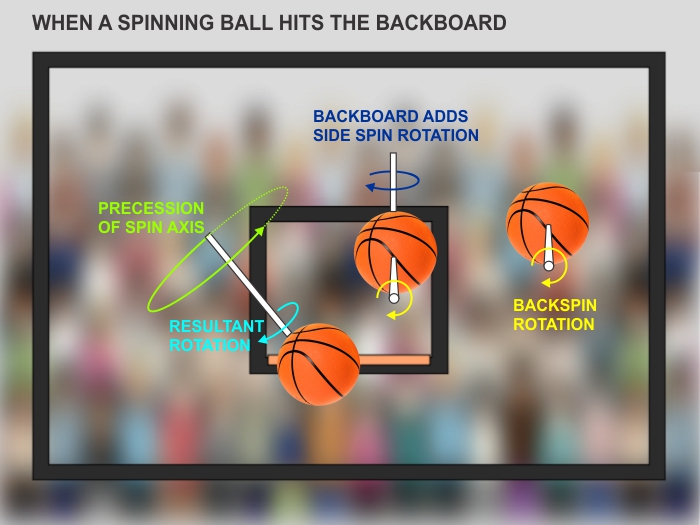 And when an object is spinning around more than one axis (which it can’t literally do without ripping itself apart), what happens is the two spins combine, at each instant, into a single spin with an axis that precesses. The combined spin rate, spin direction, and precession can be calculated assuming ideal conditions, but it’s not easily controlled by the shooter and is largely unpredictable.

That can give rise to some interesting ball/rim interactions. As you watch these extreme examples, note how the spin axis of the ball changes, sometimes allowing it to “climb” up the rim from a point more than halfway below:

If you’re still having difficulty visualizing what “spinning around two axes simultaneously” looks like, check out this video: https://www.youtube.com/watch?v=_AV5JinSviE

Answering your question without using (much) math wasn’t easy, but I hope you now see how a basketball can “rise from the dead” with the right spin. That spin comes from the shooter, the backboard, and the rim itself, with perhaps a slight contribution from the net. And when it does happen, it adds an element of excitement only rivaled by a kicked football bouncing off an upright or crossbar.