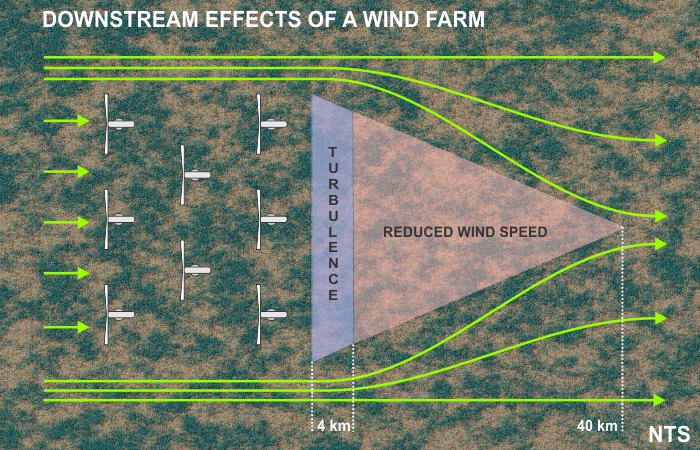 Question: In your article What Causes High and Low Pressure Systems, I believe I understood your explanation of how high and low pressure systems are driven by heat energy from the sun. You stated “Where winds converge, air piles up. Where winds diverge they leave behind a depression. Highs can also be created by the chance convergence of upper atmospheric winds, OR chance divergence of surface level winds, driven by contiguous systems.”

My question is: can turbulence from large wind farms contribute to “low level winds” thus influencing highs/lows in the California valley from Redding south to the San Francisco Bay Area? In the years the I have lived in this area I have observed time and again the failure to get seasonal rains due to “highs” keeping the rains north of and West of Redding. As a result, the droughts are becoming more and more problematic. I would pray that the situation was not caused inadvertently by well-meaning efforts to harvest renewable energy. — CPS, Redding, CA

Answer: The short answer is no. So is the long answer. You are drawing a conclusion from two observations: construction of a nearby wind farm, and changes in local weather after that construction. But as scientists always caution: correlation is not causation. Let’s take a closer look at just how wind farms interact with the atmosphere.

First, you are correct that the blades of wind turbines create turbulence. This is why wind farms separate their turbines at optimum distances and stagger the alignment of rows. If a turbine is in the turbulence of another, it will experience stress and early failure of its blades. But that turbulence only persists for around 55 rotor diameters downstream. For average sized turbines that would be around 4.5 km. The turbulence damps out naturally at some point due to friction within the air, as shown in the graphic.

The effect of a wind farm on wind speed is greater. Wind farms reduce the air speed directly downwind of the farm. Estimates range from 40-50%. This happens because wind farms extract kinetic energy from the wind. Kinetic energy is carried by any mass in motion according to: KE = ½mv2. When wind spins a turbine blade, kinetic energy is transferred from the moving air to rotate the blades, so the air slows down.

This reduction of wind speed can extent 35-40 km downwind of the farm. Beyond that, it gets “swept up” by the prevailing wind around it, much like water flowing around a large rock in a river — just downstream of the rock the current is slower and turbulent, but after a few rock-diameters the current returns to normal.

Both turbulence and wind speed reduction limit how close together large wind farms can be built. They also constrain the spacing of turbines within individual wind farms. Beyond that, turbulence and wind speed reduction don’t affect much else. Weather systems that deliver coastal rain range in size from 100s to 1000s of kilometers, and are just too large for wind farms to perturb. Most of the significant West Coast rainfalls are driven by atmospheric rivers that extend halfway across the Pacific.

Wind farms do have one documented effect on local weather: Ground-level temperatures downstream (within the 4.5 km turbulence plume) are often a few degrees higher or lower than predicted. This is because turbulence mixes upper layer air with lower layer air, and the two layers can be at distinctly different temperatures.

The correlation you observed, that wind farms and drought happened around the same time, is misleading. Neither caused the other. Both came into existence around the same time because of climate change. The booming market for green energy gave rise to wind farms (and solar farms). Large scale shifts in global weather patterns gave rise to a persistent La Niña in the Pacific. That’s what’s driving the drought in California — and much of the Southwest.

Next Week in Sky Lights ⇒ How Basketballs Rim Out

Conjunction of Jupiter and Venus
Q&A: How Basketballs Rim Out