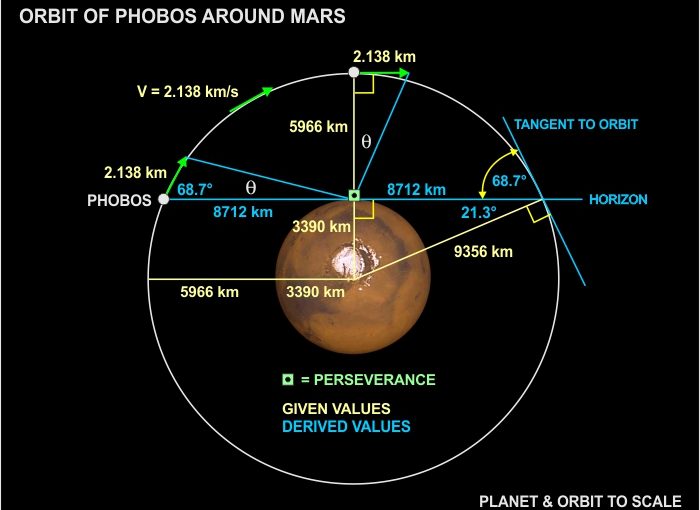 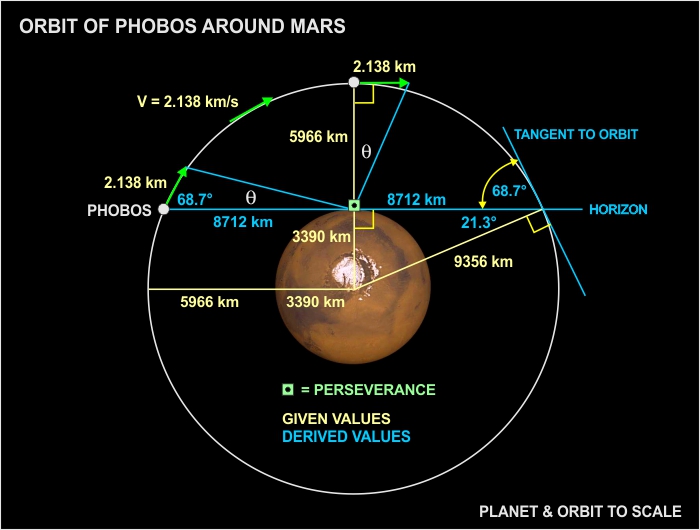 Question: Your post about that Phobos eclipse was fascinating, thanks. Awesome video by Perseverance. But there was one part I didn’t quite get. When you were talking about how fast Phobos moves across the sky, you said that its elevation above the horizon affects its speed. I have a hard time visualizing why, and I couldn’t follow your explanation. Any chance you could create a diagram showing how that works? — ERB, Chicago, IL

Answer: Yes, my “explanation” in last week’s Phobos Annular Ellipse post was a bit clunky. Thanks for your question. I think this graphic should make it more clear. Take some time to study it. The key point is: When observing of Phobos from the surface of Mars, its distance from the observer is a function of its elevation above the horizon. This affects both the angular size and apparent speed of the moon.

We can use the geometry in that graphic to learn more about the eclipse and elucidate some of the numbers I cited last week. Here’s the given orbital data for Phobos:

Note: The 0.013°/s angular speed is what would be seen from the center of Mars. Because the orbit of Phobos is circular its true speed is constant. From the surface its speed appears to vary. More on that later.

Because of its extreme distance from Mars, the Sun’s angular size barely changes as it moves through the sky. Not so for Phobos. Since it is tidally locked to Mars with its longest dimension of 27 km facing the planet, its angular diameter would be seen as:

The distances and angles (blue) were derived from the given geometry (yellow) in the graphic. I leave verification of those numbers as an exercise for students. Finding the angular speed of Phobos when overhead involves solving a right triangle. Getting the speed when rising or setting is a bit more complex and requires the law of cosines. We need to find values for the two θs opposite the green vectors representing the 2.138 km/s speed of Phobos. Here’s the numbers you should get:

Want to learn more about Phobos? Watch an animation of its motion through the sky along with Mars’ smaller and more distant moon Deimos. Their orbits are distinctly unearthly:

Or explore an interactive 3D model of Phobos compiled from NASA images:

Next Week in Sky Lights ⇒ Conjunction of Jupiter and Venus