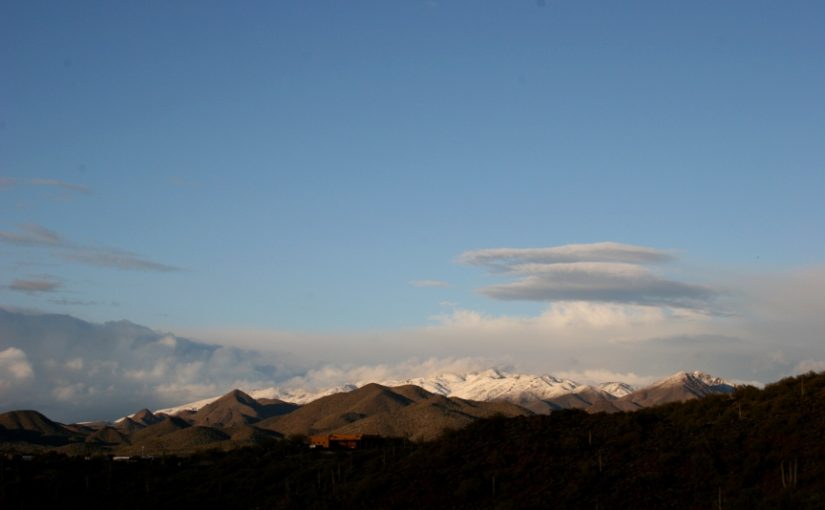 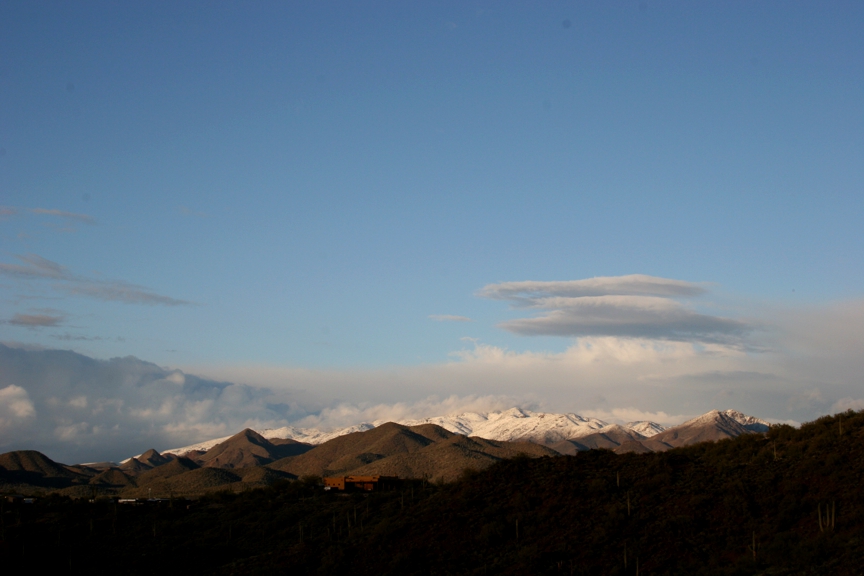 We had rain overnight, and temperatures were close to freezing up in the mountains, so I went outside expecting to see a nice cover of snow on the peaks. I was not disappointed. But there was a bonus — a stack of two (maybe three) lenticular clouds hovering over the peaks.

This cloud formation is named altocumulus lenticularis duplicatus. The “altocumulus” refers to its mid-altitude location and patchy grouping, “lenticularis” describes its lentil-like shape, and “duplicatus” indicates multiple copies were created by the same weather event.

There is another flavor of duplicatus — altocumulus standing lenticularis. Sometimes, instead of getting a stack of layers, you get a string of lenticular clouds forming downwind of the mountain. This requires a standing wave of ascending and descending air. The process is described here.

When they occur in vertical groups, as in my photo, they’re sometimes called “pancake stack” clouds. They aren’t that rare, but their striking UFO-like shape often generates false reports of “alien saucers.” Take a look at what Google Image Search returns for lenticular clouds.

Lenticular clouds will repeat in the same location under the same weather conditions. Those conditions are:

When these conditions are met, the formation process proceeds thusly: 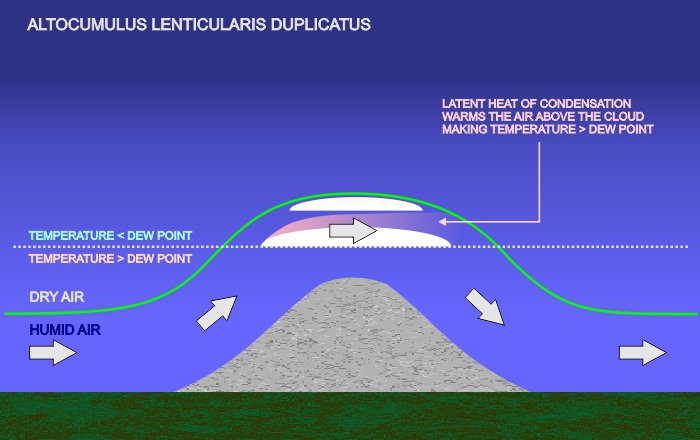 Humid air is pushed to higher altitudes where temperatures drop below the dew point. This causes water vapor to condense into the micro-droplets visible as a cloud. On the leeward side, the air descends to an altitude where temperatures exceed the dew point. Here the water re-evaporates into invisible vapor. Because the altitude where the temperature transitions is a fairly stable horizontal surface, lenticular clouds have a fairly flat bottom. Because of the laminar air flow their tops are sculpted into smooth domes.

Unlike “normal” clouds that slowly drift across the sky, lenticular clouds are “pinned” to the physical location that gave them birth. It’s important to understand that lenticular clouds have air moving through them. A constant succession of water molecules goes through the condensation → re-evaporation process.

There’s one feature in my photo I could not initially explain: Why is there a gap between the two lenticular clouds? The air in there is part of the same humid air mass. So why isn’t its water vapor also condensing?

There’s tons of online content about lenticular cloud formation, but nothing explaining the gaps. I had three hypotheses, none of which I was able to confirm:

After further consideration, I decided my third hypothesis made the most sense. Latent heat released as the lenticular cloud forms warms the air and creates a gentle updraft above each lenticular layer. This warm updraft raises the temperature above the cloud defining the cloud’s upper surface. Updrafts driven by the release of latent heat can form those huge cumulonimbus clouds associated with thunderstorms. Stacked lenticular clouds involve the same process, but on a more limited (and repeating) vertical scale.