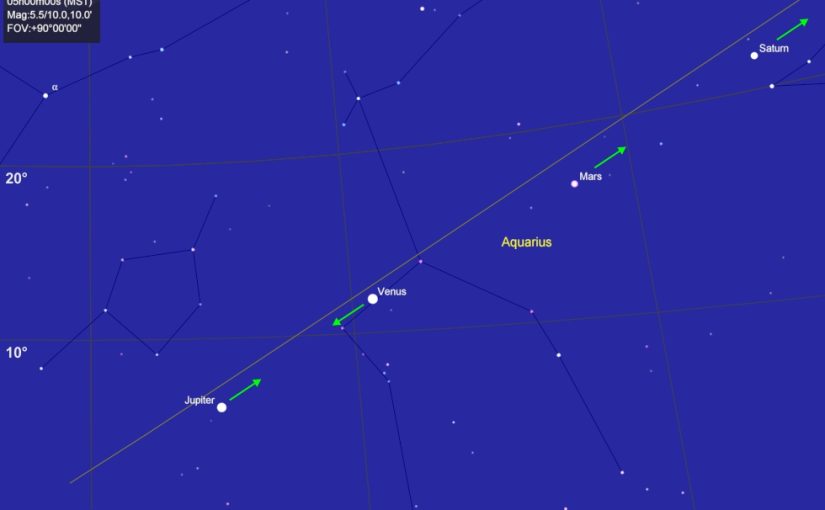 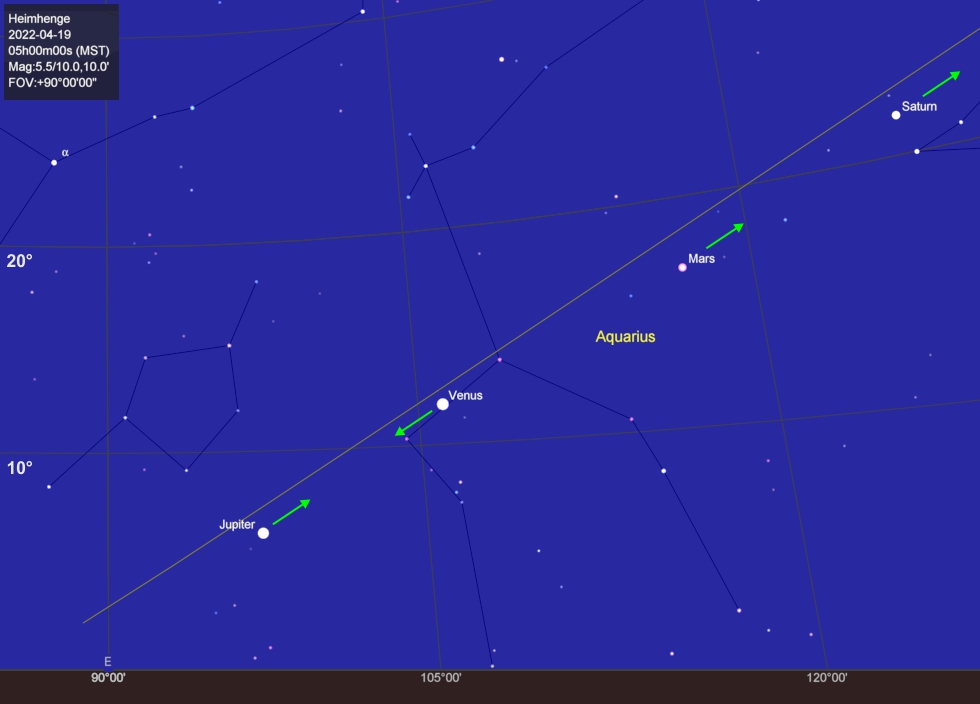 What you can watch unfold over the next few weeks has been variously described as Waltz of the Planets, Harmony of the World, and Music of the Spheres. The word “planet” comes from the Greek “planetes” (πλανήτης) and translates to “wanderer” — unlike stars, planets continuously change position with respect to each other and the stars. But their motion is far from random. In fact, once you understand the kinematics it seems very much like a dance.

The chart shows the positions of Jupiter, Venus, Mars, and Saturn tomorrow morning in the southeast sky. You’ll need to get up about an hour before sunrise to see them, and you need to catch Jupiter (last to rise) before dawn gets too bright. So find a spot where you have a clear view of the southeast horizon. And bring binoculars if you have them. If not, it’s still a beautiful celestial display.

The planets should be easy to spot, as they’re the brightest things in that part of the sky. You’ll spot Venus first as it’s the brightest, shining at magnitude -4.2. Jupiter, at magnitude -2.1, is about 16% as bright. Mars and Saturn are at nearly the same magnitude (+1.0 and +0.9 respectively), and about 40% the brightness of Jupiter. Note: a difference of 1.0 magnitude means a change in brightness by a factor of 2.5. If you need to review the concept of magnitude just follow that link.

Here’s where the “dance ” comes in … but it’ll require an investment of your time. Not much. Just a few minutes of observing in the morning, say every other day over the next few weeks. This is what you’ll see: The planets will move in the direction of their arrows at different and variable speeds. Jupiter passes within 0.2° (less than half a Moon diameter) of Venus on April 30, and overtakes Mars on May 29. Saturn continues to drift west, eventually abandoning its former partners.

Of course, the planets are doing this kind of dance all the time. But at the moment, four of them have conveniently assembled for you in the pre-dawn sky. As a bonus, the Moon will join the troupe with a brief cameo appearance in both April and May.

If you have decent binoculars (and a steady tripod) you’ll also be able to see the four brightest moons of Jupiter (pinpoints in a line), the phase of Venus (looks like a half-moon), the reddish disc of Mars (small dot), and a hint of Saturn’s rings. Enjoy the show!

Next Week in Sky Lights ⇒ The Northwest Passage