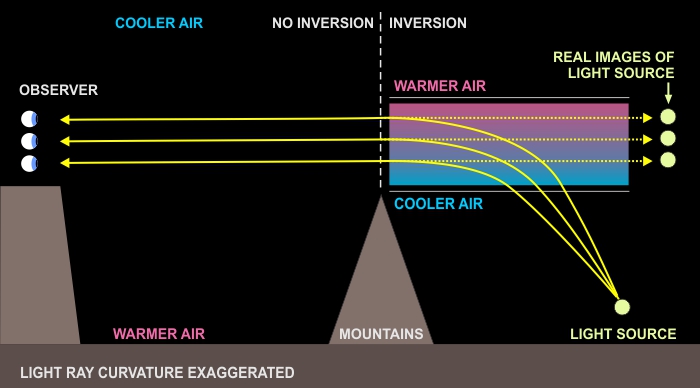 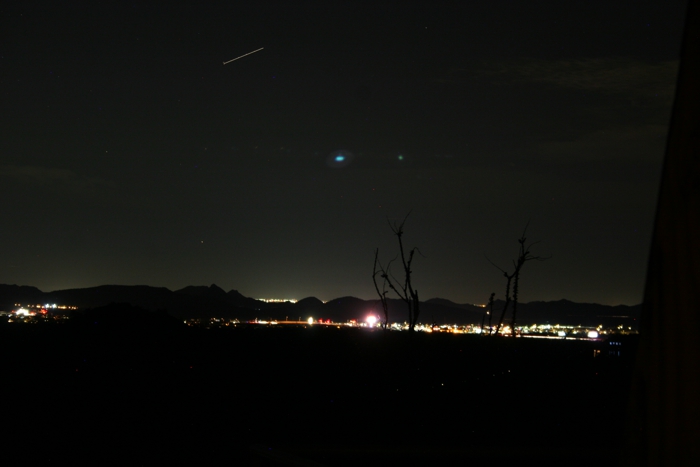 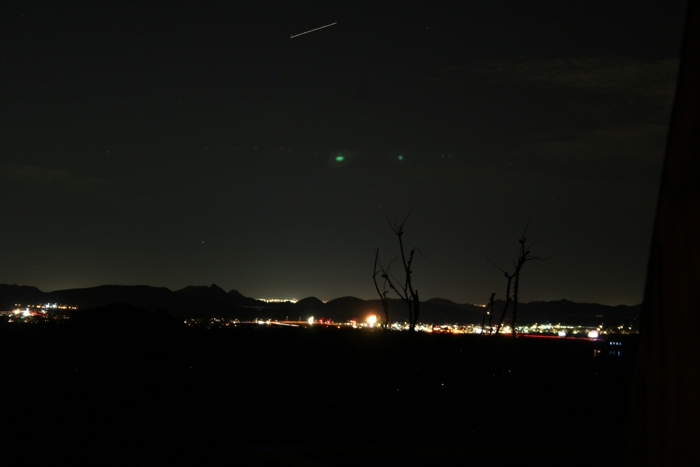 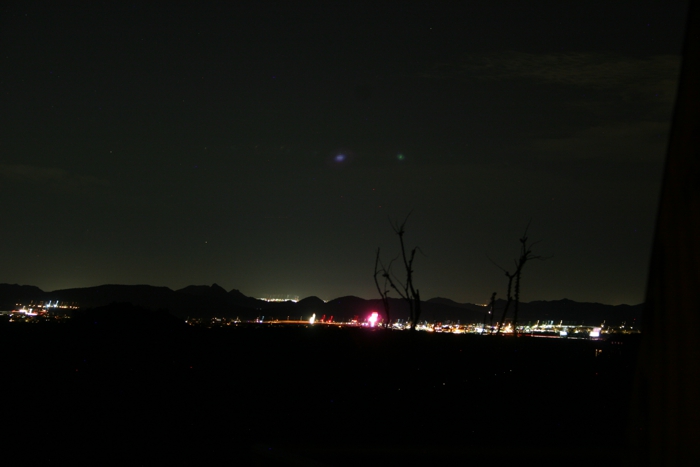 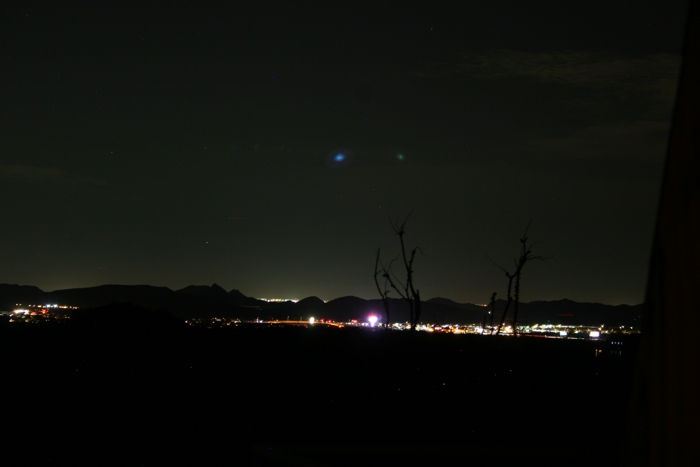 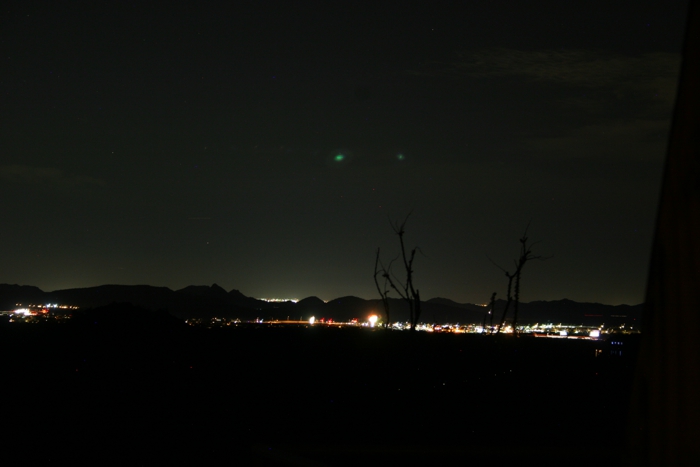 That slideshow (along with two others) first ran in my April 1, 2019 post: Extreme Superior Mirage. Upon further analysis those “floating lights” are NOT a superior mirage. They’re reflections inside the lens of my camera. The diagram below shows a frame from one of the other slideshows with lines drawn between the “floating lights” and their probable sources on the ground. The fact that these lines intersect near the center of the FOV illustrates the radial symmetry expected for internal reflections. 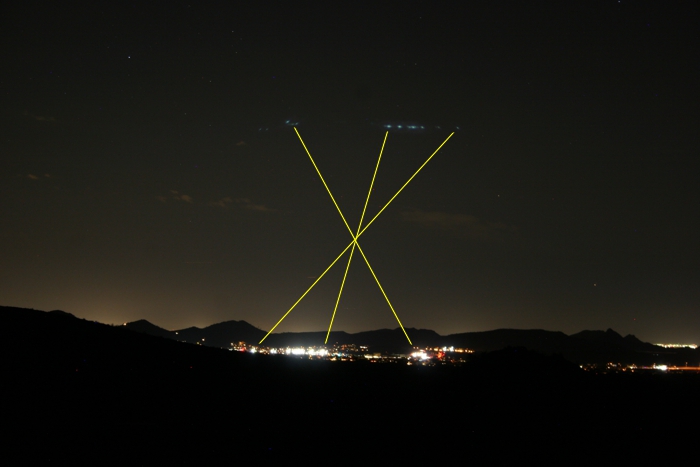 This was pointed out to me by Wim van Utrecht, a fellow skygazer from Antwerp Belgium. He runs a website called CAELESTIA that specializes in the investigation of anomalous sightings in the sky (among other things). It’s very well written and worth visiting. I thank him for spotting my error and providing related useful information.

In the interest of transparency, I left my original post from 2019 intact with a disclaimer and link to this reanalysis. I did this is because the mystery is still not totally resolved. No question that Van Utrecht is correct about the internal reflections. But, as it turns out, there was something else going on.

What I originally saw that night, and what prompted me to set up my camera, was never captured by the camera — all it recorded were those internal reflections. But what I had originally seen looked more like the animation below. I’ve simulated several of the features I observed in that first floating light:

NOTE: The light’s position in the sky is approximate — I’m trying to recreate something I saw three years ago. But I do recall the “shimmering” and the pastel color changes. It was probably fainter than portrayed in the animation (relative to lights on the ground), but I had to animate it bright enough to show its other features. I also recall (because I tried it several times) that as I changed the elevation of my eyes above the ground, by crouching and standing on tip-toe, the light moved in the same direction. Again, I’m approximating the light’s amount of vertical motion relative to the background.

For reference, the NWS archives say the temperature in Phoenix was around 17 °C (62 °F), with and 11 kph (7 mph) east wind, and 35% humidity. It was hazy over Phoenix but not overcast. The sky was clear at my location 25 km to the north and the air was cooler, around 12 °C (54 °F). The records say nothing about an inversion that night, but inversions are common in winter.

I continued to see the light intermittently as I took three series of photos, but it vanished permanently during the last series. The remaining mystery: What was that light, and why didn’t it show up on any of my photos?

My best hypothesis: The light was indeed a superior mirage. Not from the ground lights you can see in the photos — they’re too close to me, and we rarely have inversions here in the foothills. I think the light source was beyond that mountain range you see silhouetted against the sky glow of Phoenix. Here’s a graphic that shows how that mirage could be produced:

The Phoenix metro area (which is in a valley) experiences frequent inversions during cooler temperatures. An inversion creates the atmospheric conditions required for superior mirages. I’m far enough to the north, at a higher elevation in the foothills, where wind speeds are faster and the air is better mixed.

The foothills enjoy a more typical atmospheric temperature profile, where the air is warmer near the ground and cools steadily with altitude. The temperature gradient is around 0.7 °C per 100 m of altitude. In contrast, air over Phoenix during an inversion can have a very rapid temperature gradient where the trapped cool air meets the overlaying warm air. Conditions for creating a superior mirage require gradients of around 10 °C per 100 m. And I know that can happen over Phoenix because I’ve photographed it.

Another important observation was that the light moved vertically as my eyes moved vertically. The sensitivity of mirages to eye elevation is well documented. The graphic above show how multiple rays of light can be refracted from a source into a parallel “channel” of real images. Of course, there would be additional rays passing above and below those I saw with my eyes. Also noteworthy, the subtle color changes suggest the light source was an electronic billboard — hundreds of which are scattered around the Phoenix metro area.

One question remains: If I could see it with my eyes why didn’t the camera see it? Mirages are easily photographed in most cases. The camera was on full manual with exposures set for 8 seconds at f/5.6, ISO 400. I knew that would overexpose lights on the ground, but wanted enough sensitivity to capture the fainter one in the sky. Alas, the light did not show up on any of the photos. But it did show up in my eyes. Why?

Here’s what could have happened. My camera was on a tripod on solid ground. I was several feet away and several feet higher up on the deck with the remote shutter release. Although my eyes were intercepting refracted rays from the light source, the camera could have been outside the ray channel.

My second best hypothesis: Suggested by Van Utrecht: the light was a reflection from a light on the ground, either in the form of a sky tracer or truncated light pillar. Both are similar in appearance to what I saw. However, the elevation of the eye would not significantly change the apparent position of either. For reflection to occur there must be clouds, thick haze, or a layer of ice crystals and/or microdroplets. The weather that night could have allowed any of these conditions.

Of course, the only way to prove or disprove one of these two hypotheses is to get multiple photos of the light with the camera at different elevations. That’s easy to do with an extendable tripod. Only then will I have the evidence required to make a solid conclusion.

Thinking back, when I first looked at those photos on my monitor I was expecting to see one mirage. Instead I saw all those internal reflections and incorrectly concluded there were multiple superior mirages that I had missed while the first one was holding my attention. That’s where I started down the analytical rabbit hole and got sloppy with the science.

So my camera lives on the tripod now, waiting to capture good photos of that mirage — if it ever recurs. Apparently, there’s at least one bright source of light at the correct elevation in the right direction to make this possible. If I get a photo I should be able to locate the source using Google Earth. I check the view from my deck several times at night, so all I need now is for Mother Nature to recreate similar atmospheric conditions.

Next Week in Sky Lights ⇒ Dance of Four Planets

Why It's Called Sunday
Dance of Four Planets
HOME