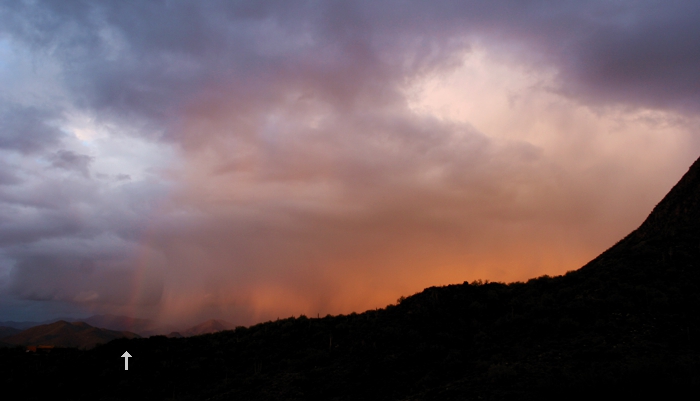 One of the best times to look for rainbows is around sunrise or sunset. We had a late-afternoon rain a few days ago, so I went outside with my camera hoping get a nice photo. Instead, what I saw was (at first impression) an approaching wildfire. I’ve seen enough of them to recognize the reddish light reflected from billowing dark clouds, but thought it strange that we’d have one immediately after 0.58″ of rain.

Then I noticed the (very faint) segment of rainbow visible just above the white arrow. That’s when I realized I was seeing a partial redbow (red rainbow). The ominous red light wasn’t from a fire — it was from the Sun. The interior of a rainbow is always brighter because of back-scattered sunlight reflecting from raindrops. Here’s a photo clearly showing this effect:

For a more detailed explanation of interior brightening, and some other interesting rainbow features, see my April 17, 2017 post: An unusual Rainbow.

We were getting a redbow instead of the usual full rainbow because the Sun was setting and its light was filtered by Rayleigh scattering. That’s why the tiny rainbow segment only contains red, orange, and maybe a small amount of green. That’s also why the back-scattered light inside the rainbow looks more like the light from a wildfire.

That partial rainbow is located where rain is still falling. Same with the back-scattered red light. Note that both extend to about the same elevation. Partial rainbows happen all the time, but mostly go unnoticed. They just aren’t as eye-catching as a full rainbow — even though they can be quite bright.

Next Week in Sky Lights ⇒ Why It’s Called Sunday