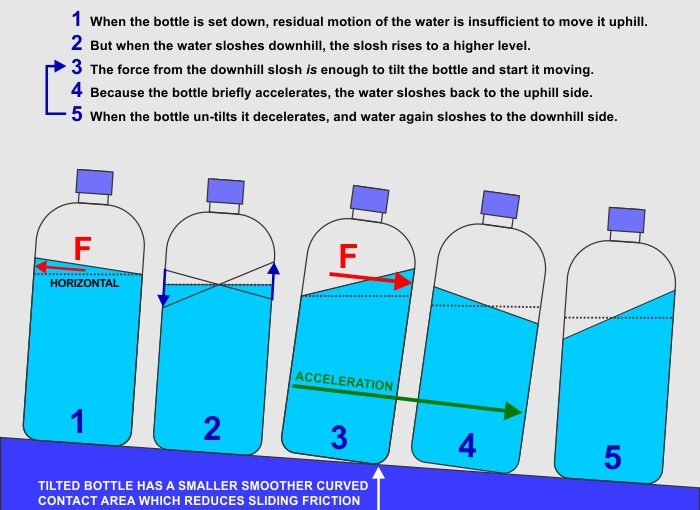 No, the car’s engine was not running. Nor were any accessories. There was no wind. Yet it “walks”! You can watch the full size HD video at: https://www.youtube.com/watch?v=p8s-XBo8pdo

This video was created by Kai Staats who’s currently doing research at Biosphere 2 in Oracle, Arizona. You can see part of the structure in the background. Kai set his water bottle down on the hood of his car and was surprised by its self-locomotion down the gentle slope. Here’s his analysis:

It appears the inherent motion of the water coupled with the rounded bottom edges of the bottle, convex surface of that portion of the Subaru hood, and half-full water bottle enabled trapped kinetic energy to translate into motion. What’s astounding is how the dual-cycle standing waves in the water (meaning, the waves repeatedly return to the same position and height, amplifying the motion) “walk” the bottle down the car’s hood.

The motion of the water in the bottle is essentially in equilibrium, the waves casting their energy against the inside of the bottle balanced by the forward “walking” motion invoked by the pull of gravity over an ever-so-slightly sloped surface.

This is a 1.5 liter bottle, roughly 1 liter full in that video. If it had been less full, it is likely there would not be enough kinetic energy in the water to cause it to move. If too full, not enough room for the waves to oscillate.

That’s a pretty good explanation. I have nothing to add or correct, but I think I can make the bottle’s motion easier to understand with a diagram and explanation that avoids most scientific jargon. Here’s are the different states that the bottle and water find themselves in at critical junctures in the “walk” … 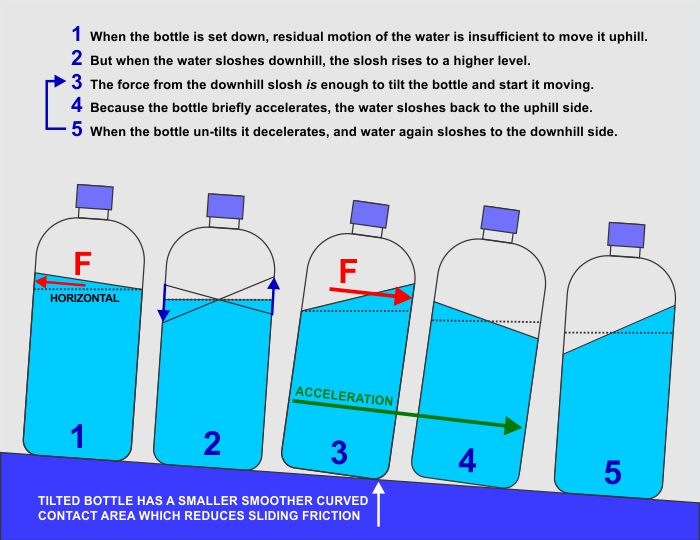 Step 3→4 are key: This is where the system gains the energy to needed to stay in motion. When the bottle slips and accelerates down the hood of the car it loses potential energy (by moving to a lower height in Earth’s gravitational field) and gains kinetic energy (as it accelerates from rest to some finite speed). Most of that energy is in the 1 kg (1 L) mass of the water — the mass of the bottle itself is less than 1% of the total.

It’s this newly gained kinetic energy that generates the high slosh on the downhill side when the bottle decelerates (briefly) to a stop. When that happens, the system is returned to step 3 and the cycle repeats. Were it not for the downward slope of the hood, the water would simply oscillate back and forth with a decaying slosh height and eventually settle into a motionless horizontal surface.

Obviously, this would not happen with a full water bottle, nor with one that’s nearly empty and incapable of sloshing to the height required to move the bottle. Further, there must be a “sweet spot” (or range) for the amount of water, at which the system will most efficiently self-propel. I suspect this system is very near that point based on the formation of a standing wave on the water’s surface. Here’s two frames from the video that show the standing waves:

And the time it takes the bottle to rock back and forth is a function of the water level, because the higher the level the longer the “pendulum” (rocking bottle). It also depends on the slope of the surface the bottle is walking on, because the more the bottle is tilted the more easily gravity accelerates (and decelerates) the slosh. And because the hood is gently curved, that slope gradually increases during the bottle’s walk.

At certain levels of water, and certain angles of hood slope, the rocking time will match what is needed to produce resonance. Resonance enhances standing waves by feeding energy into them, and you can see that happen at 0.18 into the video.

Though remarkable to witness, the walking water bottle is really just one example of an entire class of toys called “ramp walkers” or “gravity powered walkers”. They’ve been around since at least the 19th century. Here’s some modern examples:

All ramp walkers are equivalent to a ball rolling down a hill: i.e., they convert potential energy to kinetic energy. The complex mechanical linkages are clever engineering, but are far less efficient than a ball when it comes to energy conversion — multiple moving parts cause much of the potential energy to be converted into heat and sound instead of motion.

Still, ramp walkers are fun to watch. Whether they are intentionally designed, or the result of a serendipitous combination of factors. That was the case with the walking water bottle.

Next Week in Sky Lights ⇒ The Wildfire That Wasn’t