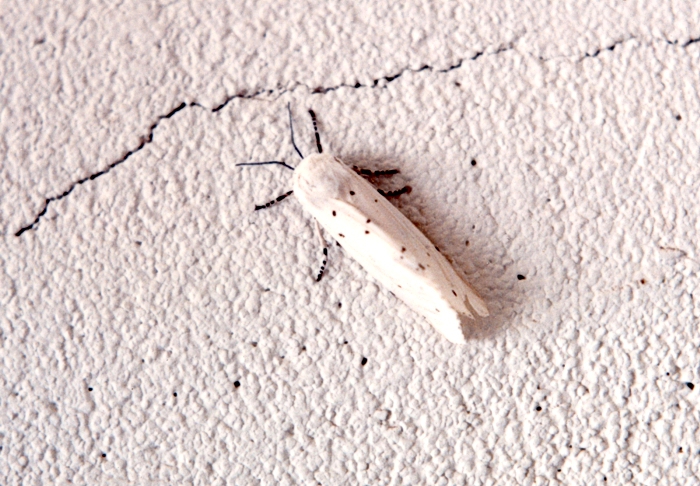 This photo is ca. 1980 when we lived in Phoenix. Our home, like many others in the development, had an outside coating of something called stucco:a cementitious mixture that’s cheap to apply, weather resistant, and (at least for the white color) reflects heat and saves on cooling. It will crack, as you can see, if there’s any settling of the wall. Builders typically add dark grains of sand to the mix for visual interest.

Stucco is interesting in itself, but what I found more interesting is the coloration of that moth. After some research at https://bugguide.net/node/view/1171370 I was able to identify it as Estigmene acrea (Salt Marsh Moth), a subgroup of what are commonly called Tiger Moths. They all have darker spots on their wings, but most spots are larger than those on Estigmene acrea. Here the spots are almost identical in color and size to the dark sand grains, and the background wing color closely matches the stucco. The moth is around 2.5 cm in length.

I flashed back to a story in my high school biology course: the Peppered Moth adaptation in Britain. There’s a lot of birch trees around Britain, and as you probably know, the bark of the birch is white. So was the Peppered Moth, at least before the Industrial Revolution. It loved to perch on the bark because it was great camouflage against predators.

As the bark of the birch trees darkened from coal soot over time, so did the Peppered Moth. The transition from white to gray and black began within a few years. The transition was nearly 98% complete after 50 years. What’s even more remarkable is that most moth species breed only once a year, so it didn’t  take that many generations for the Peppered Moth to adapt to its changing habitat and maintain its camouflage.

So I had to ask: Is this an example of adaptation by a native species to the profusion of stucco structures in the state of Arizona? Or, as a variety of Tiger Moth native to the salt marshes of Arizona, did it already have these light colored wings with dark spots as native camouflage before the stucco arrived (ca.1900)? If so, that’s curious because I’ve seen salt marshes in this state, and there’s really nothing there that would work with this camouflage — no white sand, no birch, no white rocks.

There isn’t much in the way of “early Arizona entomology” online. There are some insect collections at institutions around the state, but I doubt any have specimens 130 years old. Short of finding a 19th century specimen of Estigmene acrea preserved in amber, I’ll probably never get an answer to my question.

If there are any lepidopterists among my readers I’d appreciate your insights. Thanks!