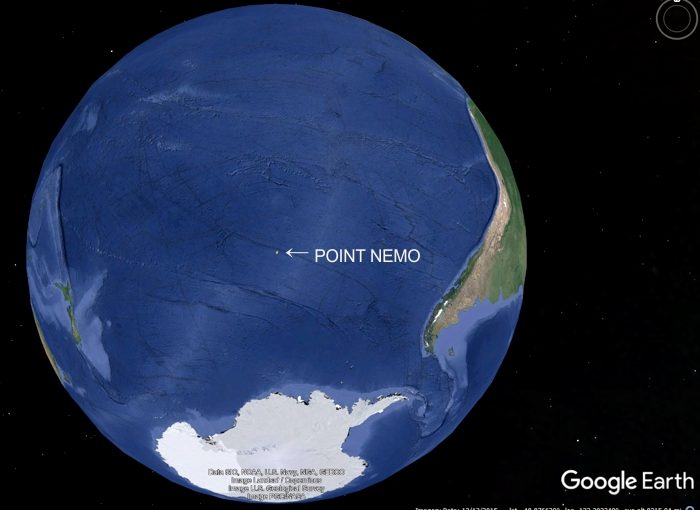 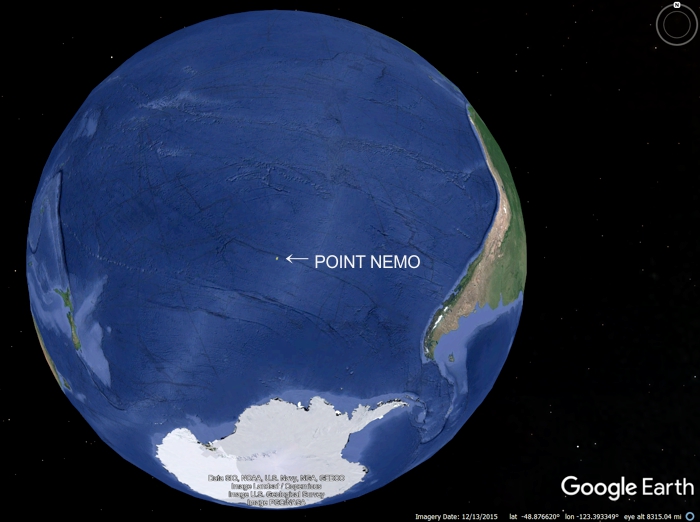 I wrote recently about the uncontrolled reentry of defunct spacecraft and satellites — space junk. Responsible space-faring nations usually attempt controlled reentry, which can be initiated either by firing thrusters (if enough fuel remains), or reorienting the craft to increase drag (which can be done using internal electrically-powered gyroscopes). Engineers are now developing “design for demise” spacecraft to ensure this capability.

If you have to bring a spacecraft down and can control where it lands, the obvious choice would be somewhere in the south Pacific Ocean far from any inhabited land. That presents a large target that should be easy to hit. The official area of the south Pacific is 2.5×107 km2 (11 million square miles).

I only recently learned that there’s an exact point considered to be the bullseye of this “target”, at which the reentering spacecraft should be aimed. It’s designated as “Point Nemo” (a tribute to Jules Verne) and has these coordinates: 48°52.6′ S, 123°23.6′ W (note those are degrees and decimal minutes). It’s the world’s official “spacecraft graveyard”. The nearest inhabited land is Ducie Island 2,688 km north of Point Nemo. Interestingly, in Latin the word “nemo” means “nobody”, as hinted at by Verne’s character Captain Nemo.

Also known as the “Oceanic Pole of Inaccessibility” and “South Pacific Ocean Uninhabited Area”, the coordinates of the world’s most remote spot were first calculated by Canadian-Russian engineer Hrvoje Lukatela in 1992.

This week we’ll explore what it takes to successfully “aim” a spacecraft at Point Nemo. We’ll consider a reentry initiated by a thruster, as it’s more predictable than reorientation. We’ll also use an equatorial orbit to keep the diagram simple. Numbers cited are typical for a spacecraft in low Earth orbit (LEO). This is what the deorbit maneuver looks like: 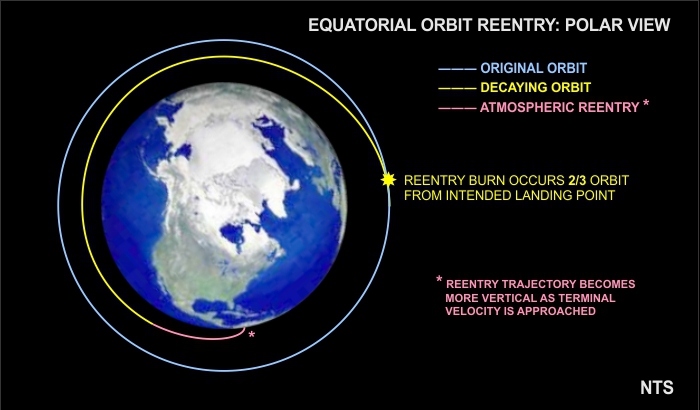 In LEO, with a speed of 25,000 kph (15,500 mph) the orbital period is close to 90 minutes. The spacecrafts’ speed must be reduced to initiate the deorbit maneuver. In the case of cargo vehicles returning from the ISS, the speed change (ΔV) required is around −1.3% (−325 kph). This is considered to be the minimum ΔV needed to allow for uncertainties in atmospheric drag. Larger ΔVs will get you down faster but cost you more fuel.

Using a ΔV of −1.3% the reentry burn is fired when the craft is 2/3 of an orbit away from the intended impact point. SpaceX’s Dragon fires its thrusters for 12 minutes when returning from the ISS. The first 60 minutes after the burn is spent in free fall while the altitude gradually decreases. When you reach an altitude of 100 km (the Karman Line) you begin to feel the effects of atmospheric drag.

Deceleration through atmosphere can take another 2000-3000 km depending on the orientation and drag coefficient of the spacecraft. This graphic from the European Space Agency shows what happens during the final minutes of reentry: 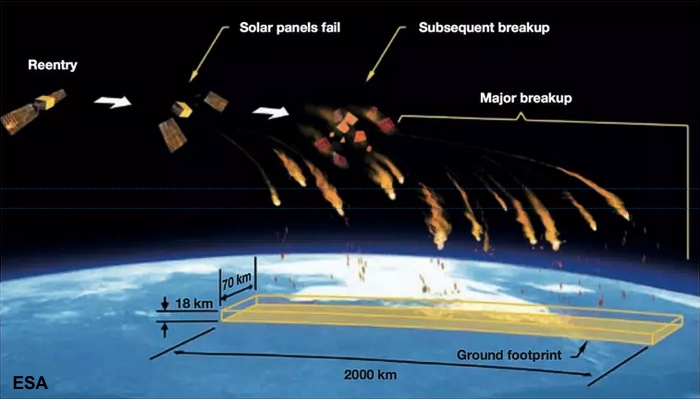 According to the ESA most of what makes it through the atmosphere without burning up are parts made from stainless steel, titanium or aluminum, none of which are toxic. These fragments sink to the bottom and pose no danger to shipping or ecosystems. Point Nemo lies in the South Pacific Gyre which is already a biological desert.

Since 1971 more than 263 spacecraft have gone down in this area, with their debris scattered widely over the ocean floor. Russia’s Mir space station was “buried” here in 2001, as was NASA’s Skylab in 1979. When the ISS is retired in 2030 it will also target Point Nemo. Airlines and shipping companies are, of course, alerted to avoid the area around Point Nemo when reentries are planned.

Truth be told, if a reentering spacecraft came down over land, the odds of a person being struck by space debris are estimated to be less than “one in a trillion” —  far less than the “one in 500,000” odds of being struck by lightning.

Next Week in Sky Lights ⇒ Measuring the Height of a Flagpole

Bomb Cyclones
Q&A: Measuring the Height of a Flagpole
HOME