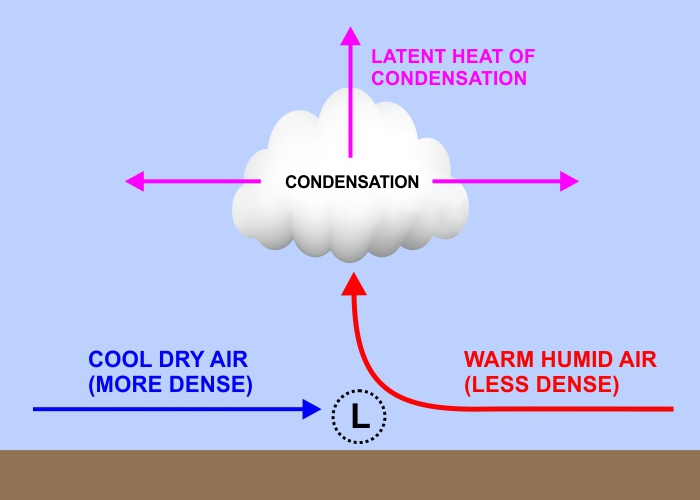 Bomb cyclones have been making the news. This NOAA video shows one that hit the northeast US coast in the last week of January 2022. Millions were under a winter weather advisory. Several feet of snow fell in some locales, other areas experienced ice storms, and wind gusts up to 75 mph created blizzard conditions toppling trees and utility poles. When it was over, hundreds of thousands were left without power in below-freezing temperatures.

You can see air over the Atlantic circulating in a strong cyclonic (counterclockwise) vortex. This is warm and humid air. Not animated is the cold dry air flowing down from the northwest. Where the two meet along the coast you get huge amounts of snow (white), icing (green), and rain (blue).

This is the formative condition for all storms: cold dry air meeting warm humid air. What happens when they meet is a function of their relative densities. The chart below is used with permission of Engineering ToolBox (2001): 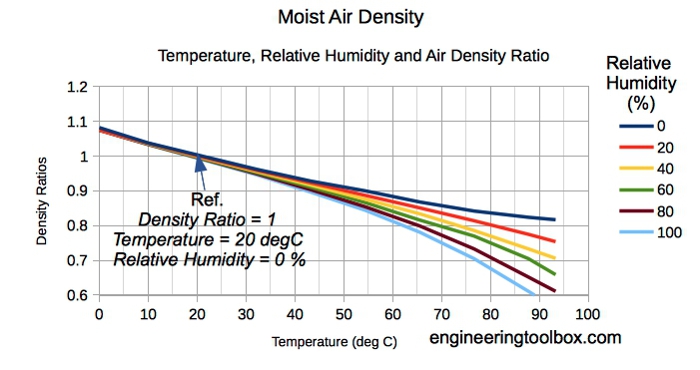 Second, gases (like most substances) expand when warmed. This further decreases the density of warm humid air. So when cold dry air meets warm humid air, the latter experiences a buoyant force and will be pushed upward. This rising air ascends through increasingly cooler layers of the atmosphere and eventually reaches an altitude where the temperature is below the dew point. Here the water vapor condenses into rain, icing, or snow.

When water vapor condenses it releases its latent heat of condensation. This further warms the rising air, lowers its density, and accelerates the updraft. The result is massive cumulonimbus clouds which generate high winds at the surface as air rushes in to replace that which has risen. Barometric pressure at the surface drops, forming a low pressure region as shown in this graphic:

At this state of formation meteorologists will be closely tracking how rapidly the barometric pressure drops. Normal pressure at sea level averages around 1013 mb (millibars). Typical daily variations of ± 1–2 mb follow the day/night heating/cooling cycle. Average storms cause a drop to around 1000 mb. Hurricanes cause pressure drops proportional to their category:

The Jan 22 bomb cyclone that hit the east coast generated a pressure drop of 35 mb, making it the equivalent of a CAT 2 hurricane. To qualify as a “bomb cyclone” the pressure must drop by 24 mb in 24 hours. This storm dropped 35 mb in 24 hours. Because of the large temperature difference between the air masses, and the high humidity of the air over warmer-than-normal Atlantic waters, all aspects of this storm were extreme.

FYI, the related term bombogenesis (meaning “explosive beginning”) was coined by MIT meteorologists Fred Sanders and John Gyakum in a 1980 paper on their research into this phenomenon. Gyakum has since stopped using the term because of its connection to weaponry, but it’s stuck in the vocabulary for better or worse.