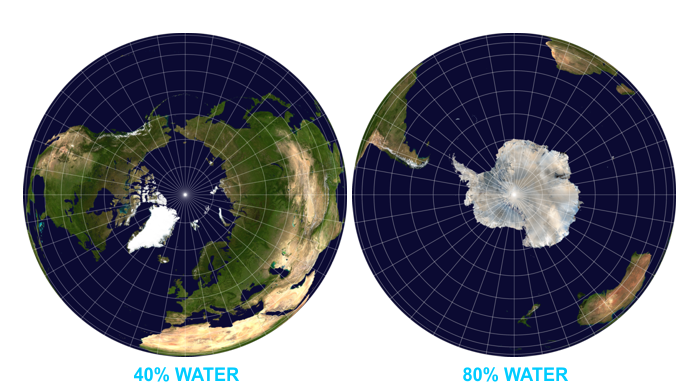 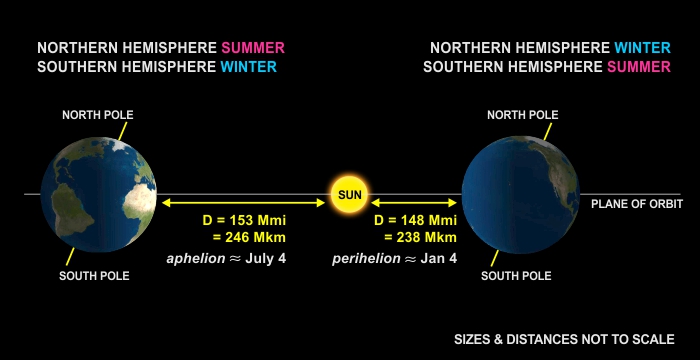 Answer: You asked if it “should be”, so yes you are correct. The diagram shows (with exaggeration) the scenario you describe. Earth’s orbit is an ellipse so it’s distance from the Sun varies. Earth is at perihelion (closest to the Sun) around January 4, and at aphelion (farthest from the Sun) around July 4. So it seems there should be some asymmetry in the seasons between the two hemispheres.

That difference in distance between perihelion and aphelion is only about 5 Mmi (8 Mkm), a variation of ±1.7%. But the intensity of light and heat we receive from the Sun follows an inverse square law, so the variation in solar radiation is ±2.9%. And that’s enough to affect weather and temperatures here on Earth.

Water tends to dominate the regional climate, and the closer the water the greater the influence. So even though the southern land masses (Antarctica included) receive 3% more summer heat, the oceans change temperature much more slowly and moderate the temperature changes on land. In South America, South Africa, and Australia, you can’t get much more than 750 miles (1200 km) from the ocean. In the northern hemisphere there are inland points double that distance.

Here’s the maximum temperatures recorded for each major land mass:

The highest records are in the northern hemisphere, so there is indeed asymmetry, but it’s not in the expected direction.

Interestingly, one could make a similar argument for the southern hemisphere having colder winters, since Earth reaches aphelion during that season. Here we do find the expected asymmetry, with the lowest temperature ever recorded being -126 °F (-89.2 °C) at Vostok Station, Antarctica on July 21, 1983. In the Arctic, at an automated weather station (AWS) on the summit of the central Greenland ice sheet, the record low is “only” -93.3 °F (-69.6 °C).

That asymmetry is due to central Antarctica being some 1500 miles (2500 km) in all directions from the Southern Ocean. Plus, unlike the northern hemisphere, Antarctica is mostly bright white which reflects much of the additional 3% of light and heat it receives during its summer. Finally, its winter lasts about 5 days longer than northern winters because Earth is moving more slowly along its orbit near aphelion.

Of course, that means northern summers last 5 days longer than northern winters — yet another source of the high temperature asymmetry we discussed earlier.