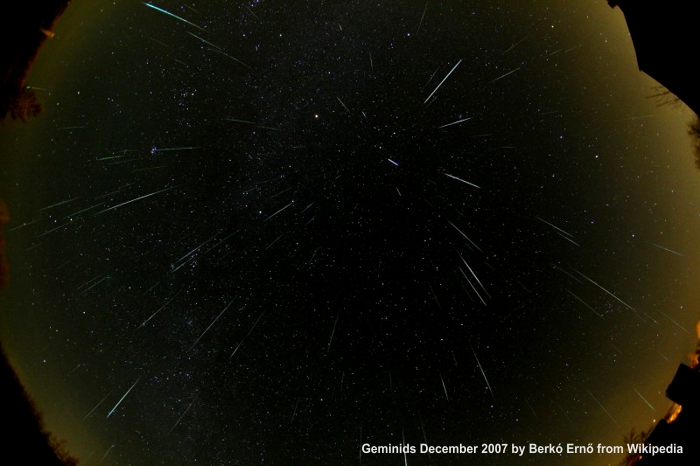 Question: Whenever I hear about a meteor shower coming up I always go outside to watch. I’m not an astronomer but I enjoy seeing shooting stars. Problem is I hardly ever see any. Are meteor showers overhyped? Got any tips for an amateur? Thanks. — JD, Denver, Colorado

Answer: Yes I do, and if you follow my tips I guarantee you’ll see more meteors. I’ve written about this in a few posts but it’s probably time for a reprise. There’s been a huge influx of new amateur astronomers since the start of the pandemic. Not surprising — astronomy is a great hobby the whole family can enjoy, and it can be done from the safety and convenience of your home, even in the city, and even if you don’t have a back yard.

First, let’s clarify what a “meteor shower” is, and what it isn’t. Because of photos like the one above (which aren’t always labeled with their exposure times) people expect to see many meteors simultaneously in the sky. Actually, it’s fairly rare to see more than one meteor at a time, even in a “good” shower.

This photo shows the Geminid meteor shower of 2007. It’s a long exposure recording meteors over 1-2 hours (my estimate) between midnight and dawn. This was a good shower by astronomy standards with a rate of 120 meteors per hour at its peak. That’s 2 per minute, sure, but individual meteors typically persist for less than 1 second so they only rarely overlap with others.

You’ll notice the meteor trails all seem to be coming from the same point in the sky. That point is known as the radiant. It’s the direction in space that Earth is moving as it plows through the Geminid debris field. This is the same effect you see when driving into rain or snow — the drops or flakes seem to be coming straight at you from a point down the road above your hood (actually, at the height of your eyes), but they’re falling (mostly) downward and you are driving into them.

Meteor showers are named for the constellation in which their radiant point is located. In the case of the Geminids the radiant is in the constellation Gemini. You can see the bright stars Castor and Pollux just left of center. So if you want to see a meteor shower you need to know where to look. A good starting point is to get an app (or book) and learn the constellations. You won’t need a telescope or binoculars for any of this.

That said, here’s your checklist for successful meteor gazing:

Your next best chance to try all this will be April 4-5 when the eta Aquarid shower peaks. The Moon will be only 15% full so skies will be reasonably dark. The radiant is, of course, in the constellation Aquarius. This is one of the dimmer constellations, so an app will be helpful if you don’t know your way around the night sky.