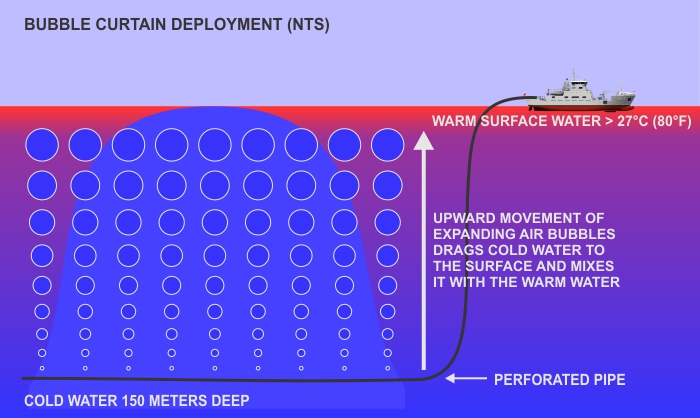 I discussed in my Sep 23, 2019 post why “nuking” a hurricane wouldn’t be a very good idea, and how it could actually increase the strength of the storm. Turns out there is a relatively benign technology that really could stop a hurricane: bubble curtains.

There’s a company in Norway called OceanTherm testing a system for hurricane mitigation — not that Norway gets many hurricanes, but it’s the same system that’s been keeping Norway’s fjords free of ice year round. Perforated piping is deployed deep in the water where temperatures are warmer than at the surface. Compressed air pumped through these pipes creates a stream of upward-moving bubbles dragging water from the bottom to the surface. This “bubble curtain” mixes with the surface water keeping it well above the freezing point. Of course, you need energy to run the compressors, but compared to running a fleet of ice breakers it’s more environmentally friendly.

OceanTherm hit on the idea of using this same system to cool surface water in the tropics where hurricanes form. Hurricanes draw their energy from warm seawater — 26.6°C (80°F) is the minimum surface temperature at which the intensity of the storm can grow, and the warmer the water the more energy available.

In the tropics, deep water is a lot cooler than the surface water, especially once you get below the thermocline. Even in the epipelagic zone, where water is mixed by wind and waves, water temperature decreases with depth:

OceanTherm has already done testing off the coast of Cuba and seen significant cooling of surface water — nearly 3°C (5°F)! Further tests are in the planning stage. They note that their system would be useless against an existing category 3–4 storm, but if they can catch the storm before it grows much beyond category 2 a bubble curtain could prevent it from growing further.

How much perforated pipe would be required? OceanTherm estimates that a 30 km (19 mile) long pipe (or assemblage of shorter pipes) would create an adequate barrier if placed directly in the path of the storm. Tests show that over a period of 48 hours wind and currents would spread the cooled surface water over an area of around 30 km by 90 km (19–55 miles). By comparison, the eye of a hurricane usually ranges from 30–50 km in diameter. Unable to draw energy from the water, the eye would collapse and the hurricane would dissipate.

OceanTherm projects it would cost around $350 million to operate a fleet of bubble curtain ships for the entire hurricane season. Not cheap, but only a fraction of the hundreds of billions in damages hurricanes cost us annually. Operational costs could be lowered by running the pipes along the sea floor between strategic islands and using land-based compressors, but setup costs would be greater.

Further study is needed to see how bubble curtains might impact the local ecosystem, because deep water brought to the surface will also carry a lot of nutrients that could trigger algal blooms and disrupt the food chain. Still, in the face of increasingly violent (and numerous) hurricanes, this could be a viable means of mitigation.

Interestingly, the same system could be used to save coral reefs that are dying in warmer ocean temperatures. Unfortunately, the corals are also feeling the result of ocean acidification as the water draws carbon dioxide from the atmosphere producing carbonic acid (H2CO3). Bubble curtains won’t help with that.

Next Week in Sky Lights ⇒ How to Watch a Meteor Shower

The World's Fastest Chicken
Q&A: How to Watch a Meteor Shower
HOME