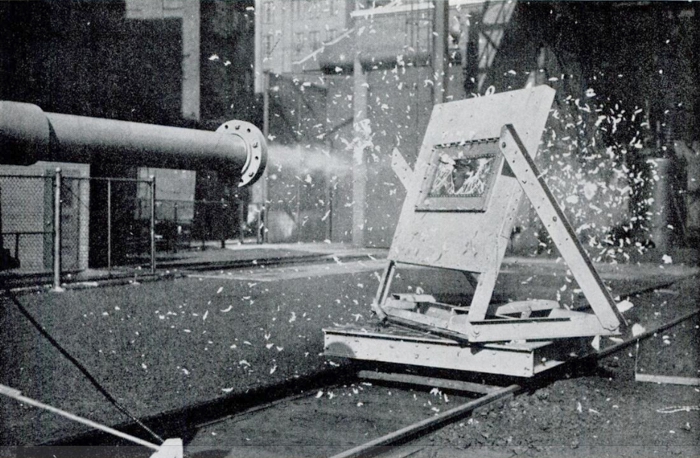 This photo shows a “chicken gun” firing a bird carcass with a speed of 640 kph (400 mph) into an airplane windshield. The gun was built in 1942 by the US Civil Aeronautics Administration in collaboration with the Westinghouse Electric and Manufacturing Company. Its purpose was to simulate bird strikes on aircraft. Data from these tests led to design changes that improved aircraft safety and reliability. No live chickens were harmed in these tests. Local farms provided carcasses of stock that died from natural causes. Typical carcass weights were around 1.8 kg (4 lb).

In 1942 the airplane was only 39 years out from the Wright brothers’ first flight at Kitty Hawk, and the commercial airline industry was nascent. But enough bird strikes had already occurred to warrant research into prevention and mitigation. Even Orville hit a seagull on one of his flights, killing the bird and tearing the fabric on a wing. With modern aircraft usually only the bird is harmed, but some strikes have led to crashes and loss of life.

In 2019 alone the FAA recorded 17,000 bird strikes within the continental US. Fortunately, most were inconsequential. One of the most publicized strikes was the Miracle on the Hudson, when an airliner piloted by Capt. Chesley Sullenberger sucked two Canadian geese into each of its engines. Both engines failed, forcing a water landing in the Hudson River. All passengers and crew survived.

The chicken gun allows simulation of bird strikes under controlled conditions. Its 640 kph launch speed matches that of airliners during takeoff and landing — most bird strikes occur below 900 meters (3000 feet). Strikes at cruising altitudes are less common but not unheard of. The chicken gun is charged with compressed air and the carcass is loaded with all parts (including feathers) intact. Most of what you see in that top photo are scattered feathers floating in the air. The carcass itself was reduced to a stream of debris when it penetrated the glass.

They were testing a windshield in that run, but other parts of the aircraft are also vulnerable to bird strikes. The metal fuselage itself is relatively sturdy, though damage to wings has been reported. Perhaps most vulnerable are the jet engines themselves, which run at 10,000 – 25,000 rpm  and are very finely balanced to reduce vibrations. A bird strike to a jet turbine would puree the bird, but also damage the turbine blades. This unbalances the turbine and causes it to shut down before vibrations tear it apart. Note the bird damage to these turbine blades: 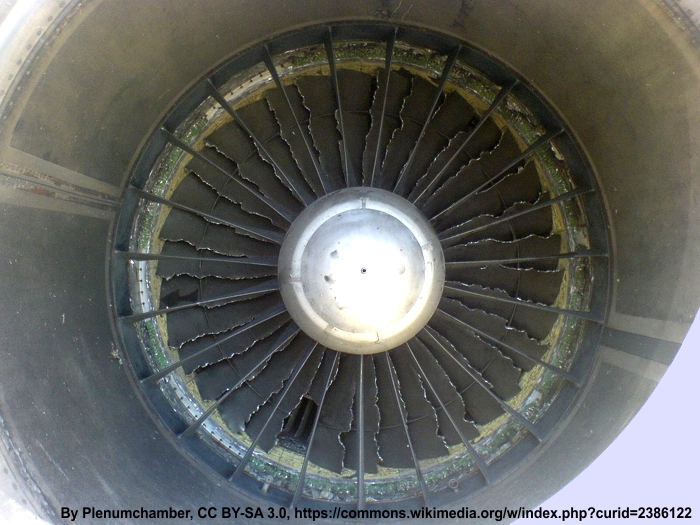 The energy of a bird strike is proportional to the square of the speed — a 1 lb seagull strike at Mach 1 (1235 kph) is like a 4 lb chicken strike at 640 kph. So at supersonic speeds bird strikes can damage even a hardened fighter jet. Turbine engines are always susceptible, but the large cockpit canopy (needed for 360° visibility) poses another vulnerability as this photo shows: 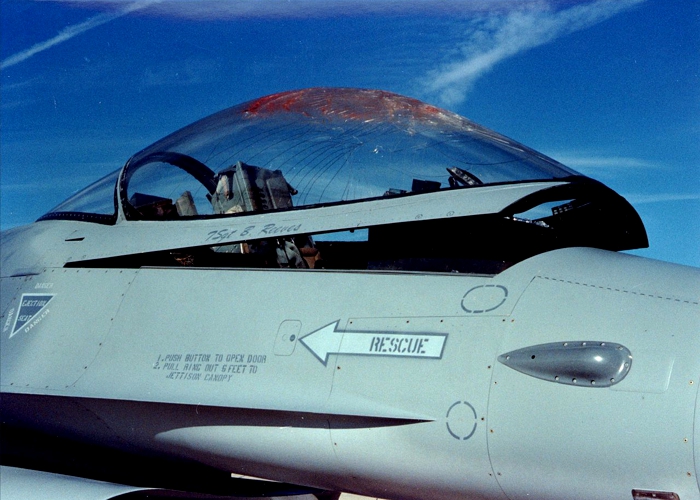 To investigate bird strikes at speeds greater than Mach 1, the National Research Council (NRC) in Ottawa, Canada built a supersonic bird gun with a bore of 44 cm (17.25″) that’s capable of firing birds at speeds typical of fighter aircraft — 1600 kph (800 mph), or Mach 1.09. A calibration test using a dummy load reached speeds of Mach 1.3! They have a poster on the wall of their lab proclaiming “Home of the World’s Fastest Chickens.” Here’s a look at their new gun: 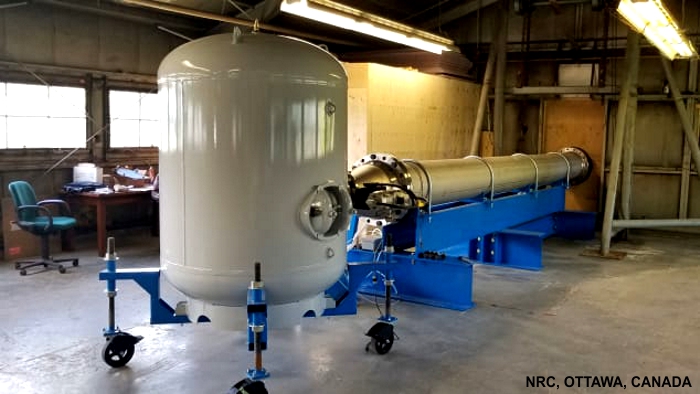 The NRC is currently using their cannon to test the effects of impacts with drones. No serious drone strikes have yet occurred, but as the hobby proliferates there’s been increasing problems around airports and during airborne fire-fighting operations. The FAA has updated its regulations for drones on several occasions, but drone technology is advancing so rapidly it’s difficult for regulators to keep up. The FAA currently limits drones to altitudes less than 120 meters (400 feet), but modern drones can reach 10 km (33,000 ft) — the cruising altitude of commercial airliners.

Next Week in Sky Lights ⇒ Bubble Curtains vs. Hurricanes