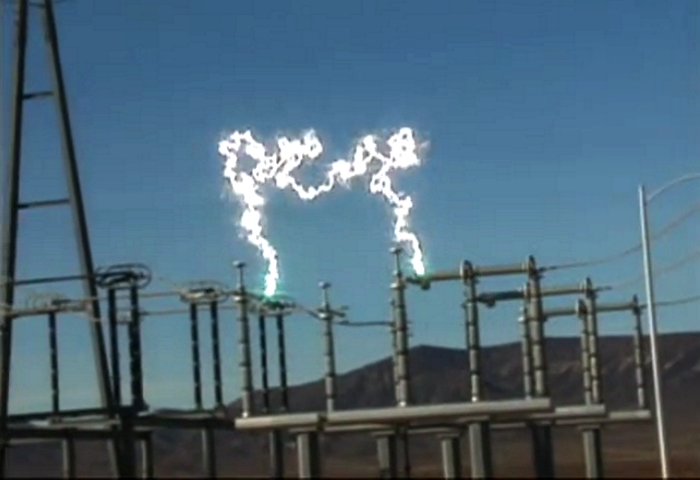 Question: Exactly what is an electrical spark? And how does it manage to jump through air? I thought electricity needed wires to flow through. I mean, I know lightning is electricity going through air, but what I’m talking about is those annoying sparks I get from light switches. Seems to happen more in the winter. — BF, Tucson, AZ

Answer: Lightning, light switch “shocks”, and the arc in the video above are all the same phenomenon — electricity flowing through air with no wires involved. It’s not easy for electricity to flow through air, but when the voltage gets high enough air will behave like a wire.

In the video, two large metal bars (around 2 meters long judging from the truck) are being retracted from their electrical contact point in order to “turn off” the circuit. At 500,000 volts a regular toggle switch wouldn’t work. You need to physically separate the contacts by several feet. Until you reach that distance the electricity just keeps flowing through the air in what is called an arc.

At first the arc is fairly direct because electricity likes to follow the “path of least resistance” and a straight line is the shortest path. Later, as the air around the arc gets heated and rises by convection, the arc is stretched upward with increasing turbulence until it eventually breaks. It almost looks like an equipment failure, but this is all expected behavior.

The light switch shocks you ask about result from static charges of only 5000–15,000 volts. Winters here in Arizona can be very dry, which enhances static charging. Having certain types of carpeting and soles on your shoes/slippers can also contribute. As you walk to the light switch friction between your soles and the carpet transfers electrical charge onto your body via a process called the triboelectric effect .

When your finger nears the switch, charge jumps from your body through the air to one of the (grounded) metal screws on the switch plate. At these “lower” voltages electricity won’t jump more than a fraction of an inch. Still, the shock can be surprising and annoying.

Air becomes a conductor of electricity when subjected to an electric field exceeding around 3×106 V/m (volts/meter). At that point air experiences dielectric breakdown. So the 500,000 volt charge in the video should be able to arc only: 5×105 V / 3×106 V/m = 0.17 m. Just before the arc breaks the total length looks to be near 5–6 meters. To understand how that can be we need to look at the physics of dielectric breakdown. Air is a mix of gases, but since 78% is N2 we’ll use only nitrogen to keep our graphic simple: 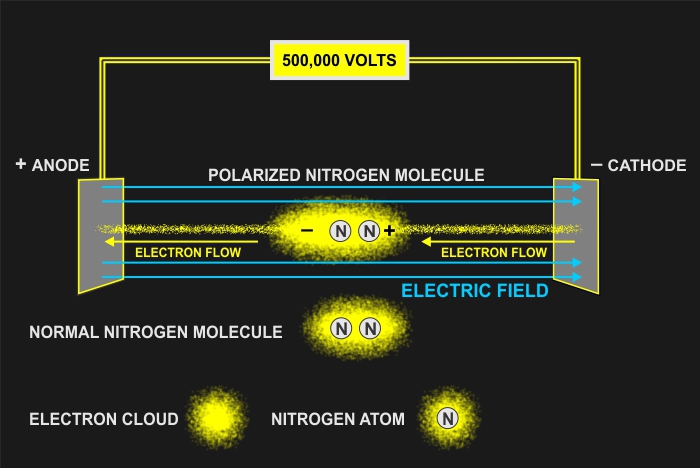 When a nitrogen molecule is exposed to an electric field its normally symmetric electron cloud gets stretched toward the positively charged anode. This redistribution of electrons creates a dipole with opposite charges at each end of the cloud. [The positive charge is a result of fewer electrons countering the positive charge of the nucleus.] At a field strength of 3×106 V/m electrons are pulled from the negative end of the cloud and begin accelerating toward the anode.

Note: Only a single molecule is shown for simplicity, but all molecules within the electric field between anode and cathode would simultaneously become dipoles.

The electric field exerts a continuous force on the electrons, so they accelerate gaining speed and energy between collisions. That energy allows them to knock out multiple electrons on impact, which then begin their own journey to the anode. What ensues is called an electron cascade with the entire air gap bridged by a hot plasma of electrons and ions. At this point the air can conduct electricity as easily as copper wire.

The plasma can be stretched to longer than the calculated 0.17 meters because, once started, it’s somewhat self-sustaining. Heat added to the air creates even more ions to conduct electricity. The 0.17 meter figure would apply if you were closing the switch to turn the electricity back on — nothing would happen until you reached 0.17 meters, at which point an arc would jump the remaining gap.

So yes, sometimes electricity doesn’t need wires and can flow through air. It can even flow through a vacuum but the physics is slightly different. If the light switch shocks really bother you, consider getting a pair of slippers with leather soles to wear around the house.

Next Week in Sky Lights ⇒ The Kessler Syndrome