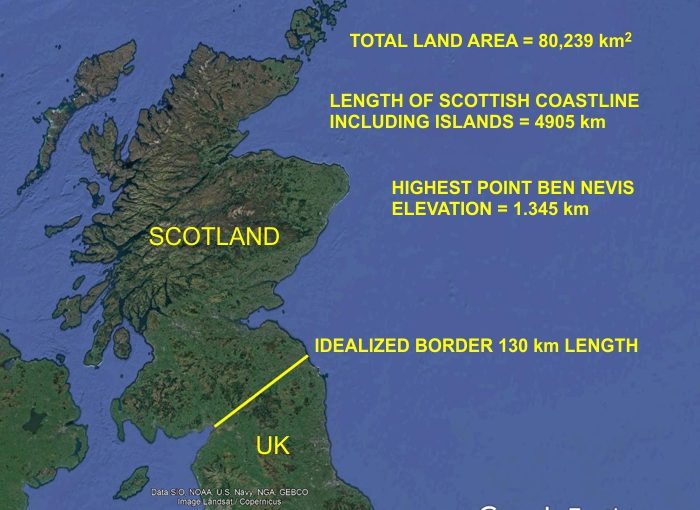 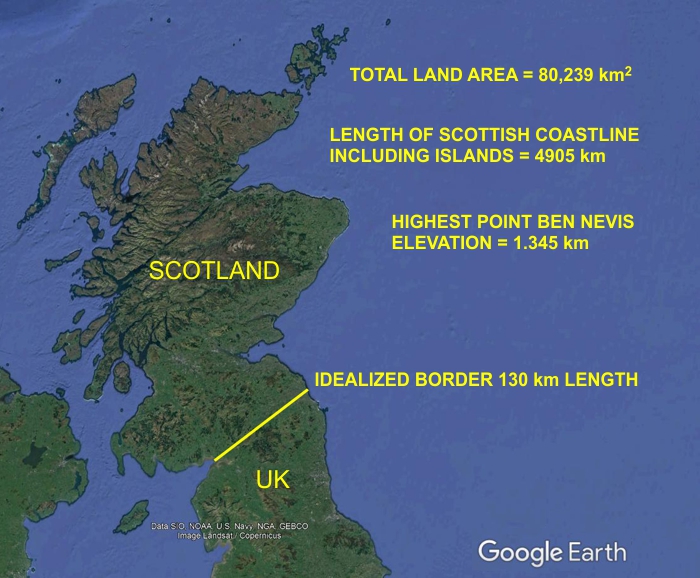 This was written during the COP26 in Glasgow, Scotland, 31 Oct – 12 Nov, 2021. The idea for the post came from a comment made by an environmentalist who was critical of the lack of significant progress. I don’t recall his name, and I’m paraphrasing, but his comment went something like this:

It’s ironic that, while those leaders sit on their hands and do nothing substantial, Scotland is getting smaller!

He was talking, of course, about the rise in sea level — currently measured to be around 4 mm/year. And that rate itself has been increasing over the last decade. So yes, all land masses are losing surface area to the sea, but it made me wonder just how fast Scotland was shrinking. The country is connected to the UK and includes several islands. The graphic above shows the relevant stats.

So here’s the question: What is the rate of land loss in Scotland? To find out we’re going to need a simplified model of the country. We’ll disconnect it from the UK (specifically England), lump all the islands into one mass, and shape it like a cone — high in the middle and sea level at the perimeter.

Now I realize some of the coastline in Scotland is vertical cliffs, and that real estate won’t be lost to rising sea levels. But where there are gently sloping beaches, any increase in sea level is going to submerge land. This simplified model will introduce some errors but it should provide at least an order-of-magnitude answer. Here’s what the model looks like:

It’s important to note that the vertical scale is exaggerated by a factor of 15. At the correct scale, the highest point in Scotland (Ben Nevis at 1345 meters) would be at the top of the white dot between the two black arrows. Scotland is flat, with an average inland slope of only 0.00842 — so in this model, for every kilometer you move inland, the altitude goes up by only 8.42 meters.

Significant figures can be misleading when subtracting numbers, so I rounded on the side of caution. Here’s the calculations for Scotland’s land loss rate over one year of time:

Since the area changes as the square of linear dimensions we can calculate the area loss as:

Ironic indeed. One never knows how these types of calculations will turn out. In most cases the answer is either surprising or underwhelming. But if you’re a Scot, you’ll probably find this calculation alarming.

Next Week in Sky Lights ⇒ Electricity Without Wires

Earthgazing From the Moon's South Pole
Q&A: Electricity Without Wires

2 comments on “Scotland Is Shrinking”