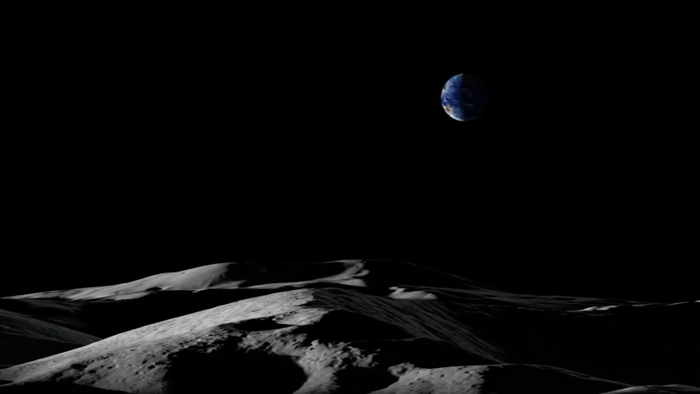 This video was produced by NASA’s Scientific Visualization Studio and released on October 16, 2021. The animation and narration are by Ernie Wright. Music is by Universal Production Music: “Enduring Faith” by Frederik Wiedmann. Lunar topography is realistically modeled on measurements made by the Lunar Prospector orbiter.

It’s a beautiful visualization that shows the unusual motions of Earth and Sun as viewed from Shackleton Crater near the Moon’s south pole. It compresses three months (a little over three lunar days) into two minutes. The virtual camera is on the rim of Shackleton Crater (partially visible at bottom right) and is aimed toward Earth. The mountain on the horizon, about 85 miles away, is unofficially known as Mons Malapert.

At this location the Sun glides around the horizon, never more than 1.5 degrees above or below it, while the Earth bobs up and down and shifts left and right. The Earth appears to be upside-down and rotating backwards. The perpetually low Sun angle produces extremely long shadows that rotate around the rugged lunar terrain.

In the second month of the visualization, the Earth passes in front of the Sun creating an eclipse. For observers on Earth, this is a lunar eclipse in which the Moon passes through the shadow cast by Earth. Viewed from the Moon, however, this is an eclipse of the Sun.

To better understand the motions in the video we need to look at a model of the Moon’s orbital configuration. The main point is that the Moon’s orbit is tilted with respect to Earth’s orbit by 5.1°. So an observer at Shackleton Crater (who is “upside down”) sees Earth moving above and below their horizon. Here’s the geometry: 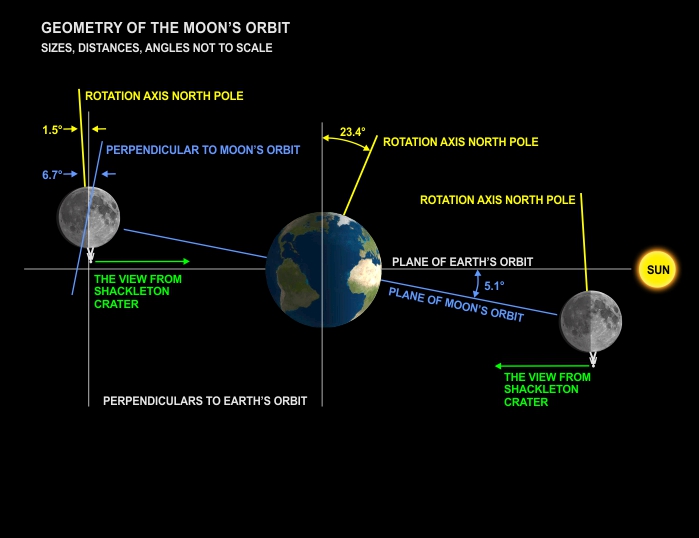 As seen from Earth, this de-synchronization makes the Moon appear to nod east and west over a month — an effect called longitudinal libration. So even though the Moon “keeps the same side facing Earth” we can see 180° ± 7.5° of lunar longitude.

Further, the Moon’s tilted orbit causes a monthly latitudinal libration of ± 5° that allows observers on Earth to see slightly beyond the north and south lunar poles. This time-lapse of the Moon makes both librations visible:

Now invert this video view and imagine you are at Shackleton Crater enjoying some Earthgazing. The NASA animation accurately portrays what you’d see, but the motions make more sense when you understand the background astronomy.

Next Week in Sky Lights ⇒ Scotland Is Shrinking

2 comments on “Earthgazing From the Moon’s South Pole”