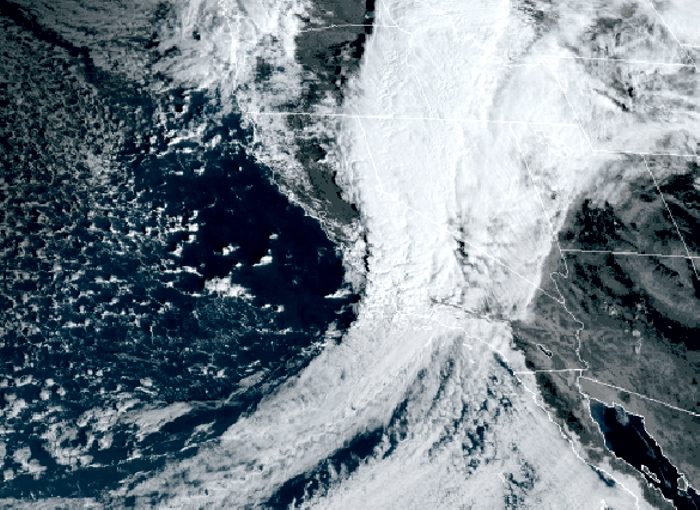 Question: All the weather people are talking about these “atmospheric rivers” lately, and how they bring huge amounts of rain. Could you please explain what atmospheric rivers are? Thanks. — FA, New York

Answer: Sure can. I’ll even show you what they look like from space. The video is a loop of 48 frames imaged by NOAA’s GOES West satellite. The loop spans about 8 hours of real time. I pulled it from this page at NWS:

This was the view on the morning of Oct 25th, the day a huge atmospheric river brought flooding and landslides to parts of California. A smaller one was hitting the Pacific Northwest at the same time. Interestingly, you can see the dark of night receding to the west at the start, and advancing from the east near the end. Clock time on the coast spans 07:20 to 15:30.

These rivers form over warm water farther out in the Pacific (or Atlantic) where ocean temperatures accelerate the evaporation of seawater.  Warm humid air rises by convection to altitudes where prevailing upper-level winds can propel it to the coast. Atmospheric rivers are visible as dense bands of clouds that get denser as they rise over coastal mountains — a process that triggers condensation. Incredibly, the atmospheric river you see in this video was estimated to carry 20X the flow of the Mississippi River!

The reason you’ve been hearing more about them lately, especially on the west coast, is that when heavy rains fall in areas with burn scars (and there’s a LOT of those out west this season) they often cause debris flows that can destroy houses and roads and bridges. Burn-scarred ground is not very absorbent, so rain tends to run off rather than soak in. Debris flows carry water, soil, ash, and all manner of objects including trees and vehicles. Forced evacuations are not uncommon.

The Scripps Institution of Oceanography recently devised a 5-level scale to rate atmospheric rivers on the basis of how much potential damage they could do, factoring in water vapor content, wind speed, and duration. An AR-1 is at the low end of the scale and pretty much represents a “normal” rainfall event. The one in the video was rated AR-3 to AR-4.

The warmer Earth becomes, the more frequent and intense the atmospheric rivers. Unfortunately, I expect the weather people will be talking about them even more in the years to come.