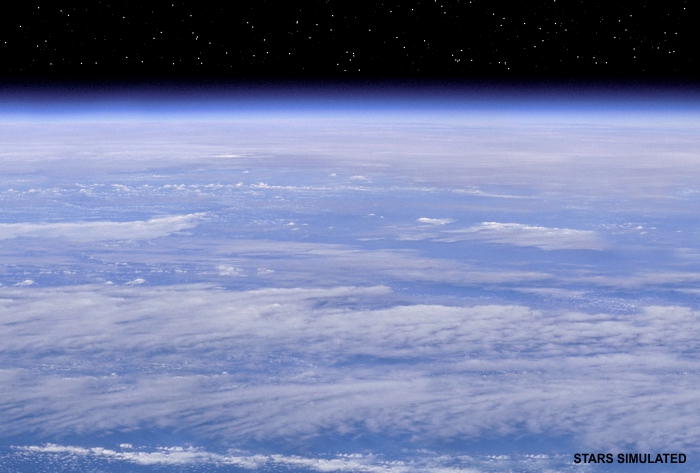 Question: I saw William Shatner’s interview with CNN after he got back from his flight into space. I was surprised at how emotional he got about the ride. What I didn’t get was his remarks about the “thin fragile atmosphere around our planet” and that there was “nothing but blackness and death beyond it.” I know Shatner tends to overact but this seemed a bit hyperbolic to me. What was the big deal? — GT, Seattle, WA

Answer: From what I’ve read of other space travelers (including NASA astronauts), the transition from blue sky into the blackness of space is a life-changing experience. It’s an epiphany for many. I think it comes down to living your entire life within the safety of our atmosphere, never much thinking about its extent, and then suddenly seeing just how thin it is compared to the Earth itself. The empty blackness of space, in contrast, goes on forever.

The photo simulates what Shatner saw — stars were added to compensate for the low dynamic range of the original photo. Human eyes would see both Earth and stars. All the weather on Earth takes place in that thin blue band. What you see is the troposphere and lower stratosphere. Those bottom-most two layers of the atmosphere extend from ground level up to around 50 km (30 miles). At that altitude 99% of the atmosphere is below you.

Above 50 km is the mesosphere. You can’t really “see” the mesosphere because the air particles are sparsely distributed and don’t scatter much light. So when you look through it toward the horizon, even when sunlight is streaming all around you, all you see is the black of space and myriad stars. In fact, the stars would first “come out” around 35 km, even at noon. And that’s when it hits you — the atmosphere is finite.

By the time the rocket reaches its maximum altitude just above 100 km (65 miles) you can see even the faintest stars and the atmosphere appears proportionally thinner. At this point you’re halfway through three minutes of “weightlessness” and feeling detached from Earth in another profound way.

The blue circle in the graphic below shows just how thin the atmosphere is on a planetary scale. That thin layer is what enables Earth to host living creatures. It protects us from all but the largest meteors. It blocks harmful radiation from space and the Sun. And due to its weight, it exerts enough pressure at the surface to allow the presence of liquid water. But to scale, it’s pretty much like the shell of an egg: 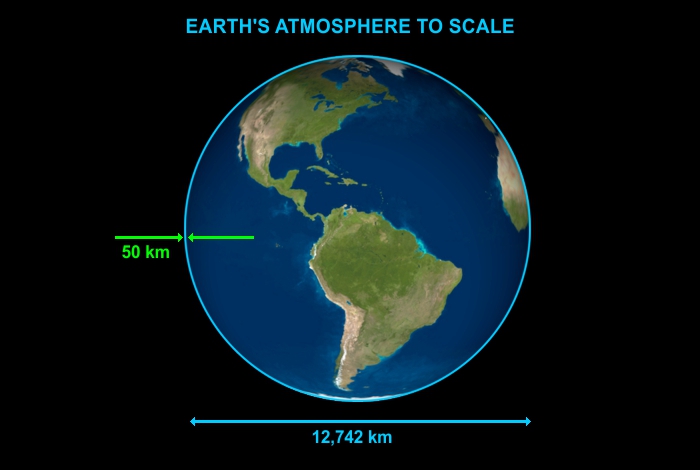 So I’m not surprised by Shatner’s emotional response. I think it would be a natural human reaction to seeing what he did. He remarked how “if all people could experience this, maybe they’d appreciate the planet more and act accordingly. Even a virtual reality flight might do it.” I tend to agree.

Here’s a modest proposal for Bezos, Branson, and Musk: Offer free flights to the leaders of all nations on Earth. You can afford it. That’s only 195 tickets; 65 each if you split them evenly. It would be interesting to see who would accept and who would decline. You’ll have an long line of paying customers after that. If seeing Earth from space makes an impact on those leaders, and they get serious about protecting the planet, you’ll buy a lot more years to run your business.