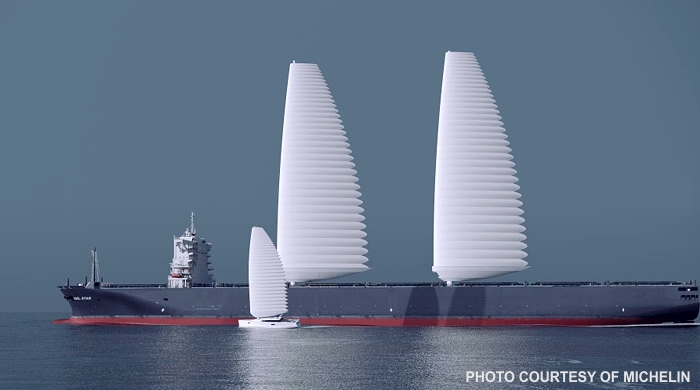 The Age of Sail spanned 1600–1850, when wind-powered ships rose to dominate global trade and warfare. Steam power took over during the last half of the 19th century, followed by petrol-based fuels in the 20th century. We may now be on the cusp of the Second Age of Sail with new technology called wingsails that can be retrofitted to cargo ships. The photo shows an experimental system designed by Michelin (yes, the tire company) that could reduce fuel requirements for cargo ships by 25–30%.

Shipping accounts for 2.5% of global carbon emissions and is predicted to reach 17% by 2050. Most cargo ships burn diesel fuel, which is especially harmful to the environment. Michelin’s wingsail system is an inflatable airfoil with better performance than a standard sheet sail. It can be easily attached to existing superstructure on most cargo ship designs. The wingsail can be deflated for passage under bridges and reinflated in minutes. The iconic “Michelin Man” design allows for smooth and symmetric folding when the wingsail is collapsed.

Unlike World Cup racing yachts, cargo ships run on strict schedules along prescribed shipping routes so they can’t take full advantage of the wind. But whatever route is taken, depending on the benevolence of the winds, wingsails could significantly reduce fuel requirements and emissions.

This graphic shows the forces involved on a vessel powered by wind. It ignores several other forces that would be present on real cargo ships and focuses on how the sail adds propulsive force: 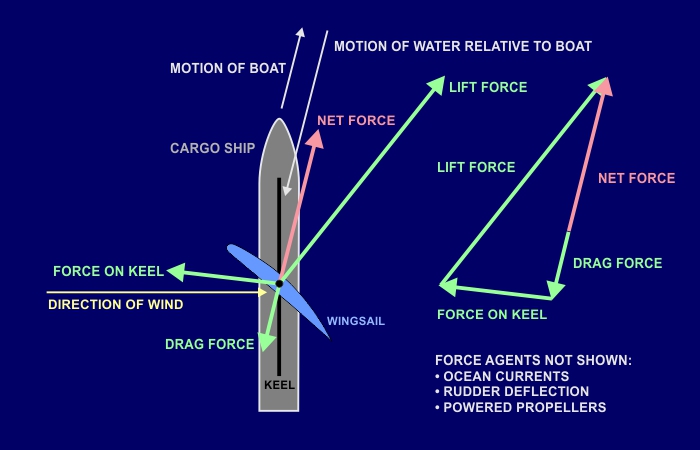 The net force (red) can be calculated using trigonometry if you know all the vector angles and lengths. But for approximate visual solutions the “head to tail” method works well enough. Surprisingly, the order in which you stack the component vectors (green) makes no difference — when you draw the net force vector from the tail of the first vector to the head of the last vector it always comes out the same. Try it!

I should point out that most large cargo ships (like the one in the top photo) don’t really have actual keels like regular sailboats. The long body of the ship serves as a keel, preventing the wind from moving the boat sideways (much). The vector diagram shows a keel just to keep the visualization simpler. Only a single wingsail is shown for the same reason. In practice, multiple sails could be used given the length of cargo ships.

One of the counterintuitive facts about sail propulsion is that the greatest speed is not obtained when the wind comes from directly behind the ship. With a direct tailwind, after the speed of the ship reaches the speed of the wind, no further increase in speed is possible.

Greater speeds can be reached when the wind blows (nearly) perpendicular to the vessel — a direction sailors call abeam (as is shown in the graphic). With this geometry the speed of the boat can exceed the speed of the wind. The top speed is limited primarily by friction between its hull and the water. Sailboats built for ice racing run on blades that have very low friction, and when sailing abeam easily reach speeds 3X that of the wind.

The shipping industry is well aware of its carbon footprint but has no economical alternatives to burning diesel. There’s been some research into using green fuels like hydrogen or synthetic hydrocarbons made from biomass, but those fuels are an expensive and ongoing cost. Wingsails are a one-time investment, after which the wind is yours to use for free.

Next Week in Sky Lights ⇒ First Photo of Earth From Space