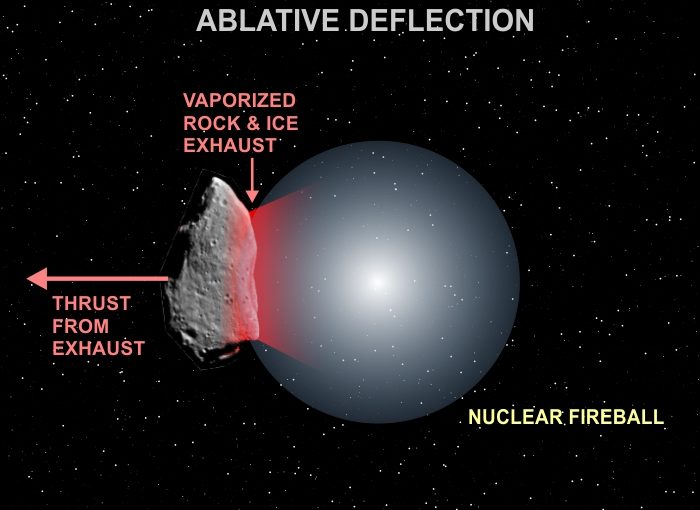 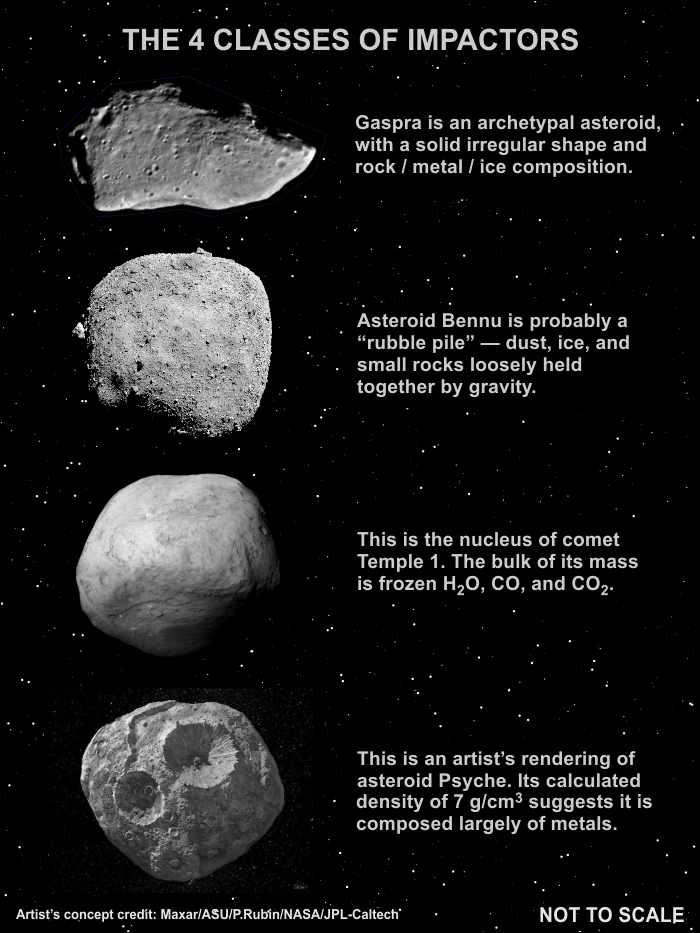 Question: I just read how NASA is going to crash a spacecraft into an asteroid to see if we could change its orbit enough to miss Earth. I thought we’d use a nuclear missile. Doesn’t seem to me that a spacecraft collision would make much of a dent. Why not use a nuke? — DS, Tulsa, OK

Answer: You must be talking about NASA’s DART mission, scheduled to launch later this year. The short answer is: We’d prefer not to launch nuclear weapons into space unless absolutely necessary, because a high speed impact might be all we need. Sure, all the “asteroid apocalypse” movies use nukes, but that’s because it’s good FX. Also, we’d need to negotiate a temporary suspension of the 1967 Outer Space Treaty which prohibits the use of nuclear weapons in space.

How well a high speed impact would work really depends on the composition of the target. The menagerie of impactors we have to prepare for (top graphic) complicates our defensive strategy. We don’t expect any of the named asteroids (or comet nucleus) to be a direct threat to Earth, but they’re great examples of the four asteroid classes. Plus, we have those really good photos. I’ll start at the top …

Solid rock with traces of metals: Although Earth was surely struck by all classes of impactor during the Late Heavy Bombardment, these days this is the most common type of object to impact Earth. They have densities in the range of 3–4 g/cm3 and would react to defensive impacts and explosions pretty much like a billiard ball.

Rubble pile: Astronomers suspect that many asteroids are just piles of gravel and dust loosely held together by the force of their cumulative gravity. They settle into a roughly spherical shape, but there’s a lot of empty voids between the constituent particles. Density estimates are in the range of 1–2 g/cm3. They would react to impacts and explosions more like a mudball, distorting and splattering instead of cleanly rebounding.

Ice: We know the nuclei of comets are around 80% ice in the form of frozen water, carbon monoxide, and carbon dioxide. The rest is dust and gravel. They’re often described as “dirty snowballs”. With internal voids their density ranges from 0.6–0.8 g/cm3 — less than that of water. Their reaction to an impact or explosion would be somewhere between that of a solid rocky asteroid and a rubble pile.

Metallic: Based on measurements of their gravity by passing spacecraft, we know some asteroids have densities in the range of 6–8 g/cm3. These are clearly solid and metallic in content. They’d have the same “billiard ball” reaction to a force as would a solid rock asteroid, but they’d be a lot harder to deflect due to their high inertia.

So why not just nuke anything headed our way? A nuclear explosion in space differs from one on Earth. If you have this vision of a mushroom cloud erupting on a targeted impactor think again. Mushroom clouds consist of vaporized and/or incinerated materials from the ground below the blast. Hot rising air carries that material into the upper atmosphere creating the classic “mushroom cloud” shape. The nuclear blast itself (called the fireball) is roughly spherical in shape — the mushroom cloud is just the resultant “weather.”

On July 9th, 1962, the US launched a 1.4 megaton nuke over the south Pacific Ocean. Code named Starfish Prime, it detonated at an altitude of 400 km. That put it well into the vacuum of space. It was a night launch, but it momentarily turned the sky daytime blue. This is what a pure nuclear fireball looks like:

In the atmosphere, a nuclear blast produces a huge shock wave that shatters and topples structures miles from the explosion. In the vacuum of space there can be no shock wave. The expanding plasma of the fireball (and vaporized fragments of the rocket) would exert some force on the asteroid, but it would be negligible compared to an atmospheric blast. Yes, the closer the explosion the greater the force, but the kinetic energy of the expanding plasma is only a fraction of the nuclear energy released.

Most of the energy released in a nuclear explosion comes in the form of electromagnetic radiation, from radio waves to gamma rays and everything in between. The radiation spectrum peaks in the same range as the Sun (which is why it looks like “daylight” in the video). Temperatures in the fireball range from 7000–8000 °C — hot enough to vaporize tungsten (boiling point 5660 °C).

The effect of a nuclear fireball on an asteroid is best characterized as ablative deflection. On the side of the asteroid facing the fireball, layers of material would be vaporized and blasted away in jets of plasma. Like the exhaust of a rocket, this produces a thrust in the opposite direction. The process is shown below: 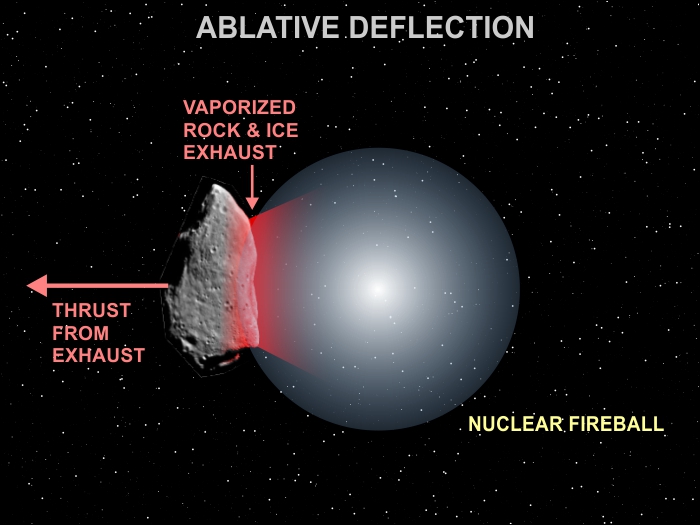 Of course, the farther away from Earth the asteroid is intercepted, the smaller the nudge needed to make it miss. Therein lies the rub: Our current fleet of nuclear armed ICBMs are ready to launch on a moments notice, but they can only reach an altitude of 2000 km, at which distance asteroid deflection would be impossible. That’s why they aren’t called IPBMs (interplanetary ballistic missiles).

To assemble and arm a more powerful rocket would take weeks at best. Several nations have this capability, and some scientists argue having a few IPBMs already assembled and ready to launch might be a good idea. It would be wise to have more than one, as multiple shots increase the probability of success. If the US, Russia, and China each built an IPBM with a preloaded nuke we’d have a ready arsenal to protect the planet. Alas, there’s little movement in that direction.

DART will use an IPBM, specifically a SpaceX Falcon 9.  This rocket could also carry a nuclear payload, but NASA’s Planetary Defense Coordination Office prefers a simple kinetic impactor for this mission. DART will calibrate the effect of kinetic impact on an asteroid of known size, and tell us if and when a nuke might be needed.

Next Week in Sky Lights ⇒ The Second Age of Sail

Q&A: Getting Water From Rocks
The Second Age of Sail
HOME