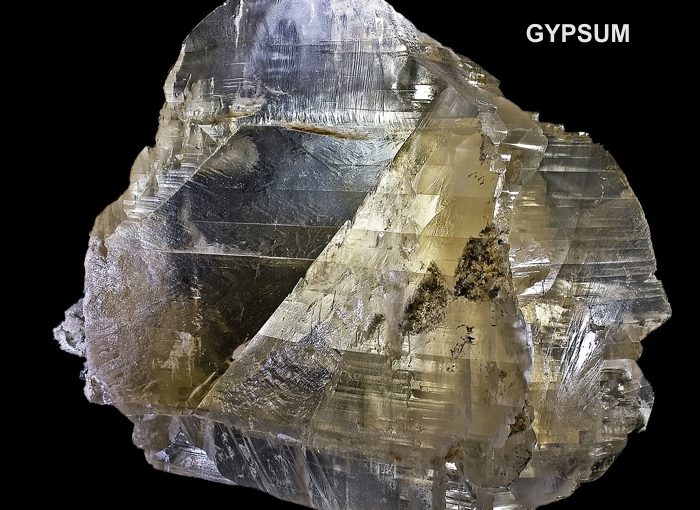 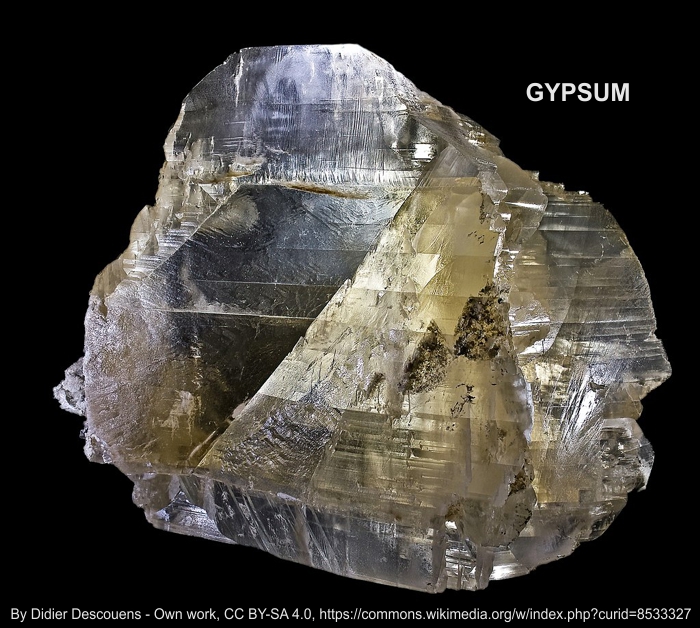 Question: I read this article about how NASA is looking to get water out of rocks on the Moon and Mars. Are they talking about finding geodes with water inside? — CW, Dallas, TX

Answer: No. There might be geodes on Mars where water once flowed, but certainly not on the Moon. And although geodes sometimes contain liquid water it’s not very common. In most cases the water that deposited the geode’s crystals is long since evaporated. What NASA’s talking about is hydrated rocks, specifically gypsum (top photo). If you want to learn more about their research go here.

Hydrated rocks contain minerals with water molecules attached. In the case of gypsum (aka calcium sulfate dihydrate) the chemical formula looks like this:

The two water molecules are connected to the calcium sulfate with relatively weak hydrogen bonds (basic electrostatic attraction) instead of covalent or ionic bonds where electrons are shared between atoms. That’s what the • in the chemical formula means. If you heat gypsum to 100 °C (212 °F) it’ll release those water molecules in the form of steam. While combined with the calcium sulfate the water isn’t “wet” — it’s part of the solid crystalline structure in a state called water of crystallization.

Gypsum is 21% water by weight. By volume, depending on the crystal geometry, it can be as high as 50%. So there’s a good amount of water inside gypsum, and it doesn’t take a lot of energy to extract it. There are many other examples of hydrated minerals, but gypsum is one the most abundant. In fact, veins of gypsum have been spotted on Mars by the Opportunity Rover. The vein in this photo is around 2 cm × 50 cm: 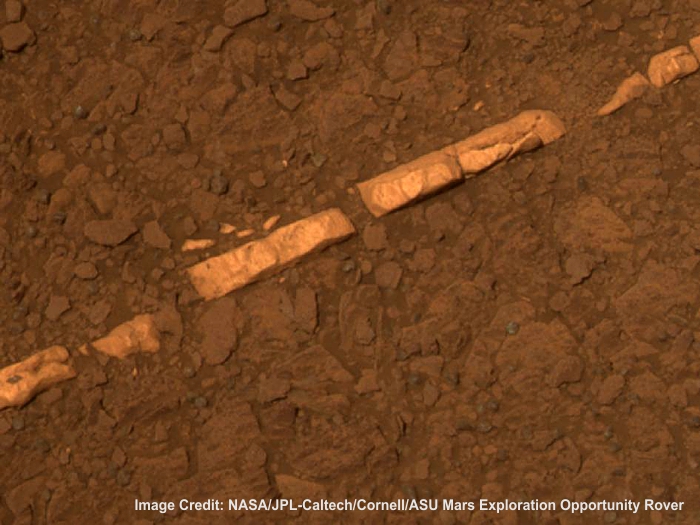 There’s another class of minerals that “contain water”, but it comes in the form of hydroxyl radicals (OH) that must be combined to form water and oxygen. It requires more energy to extract the water, but the reaction also provides oxygen as a byproduct. NASA estimates they could fill a standard 12 oz water bottle from a cubic meter of lunar regolith. Here’s what the reaction would look like using bauxite (aka aluminum ore):

In this case you’d get an additional useful byproduct — aluminum, a strong and lightweight building material.

Of course, whether you’re talking about the Moon or Mars, we’re pretty sure both have water in the form of subterranean or dust-covered ice. See my Dec 3, 2018 post: Water on the Moon. That would be the easiest water to extract, but there’s a finite supply of ice on both worlds. For long-term habitation we’d want to tap into the rocks for water, oxygen, and construction materials. Further, we can also make rocket fuel from water via electrolysis.

So yes, there is water in some rocks, but you won’t hear it sloshing around if you shake them.