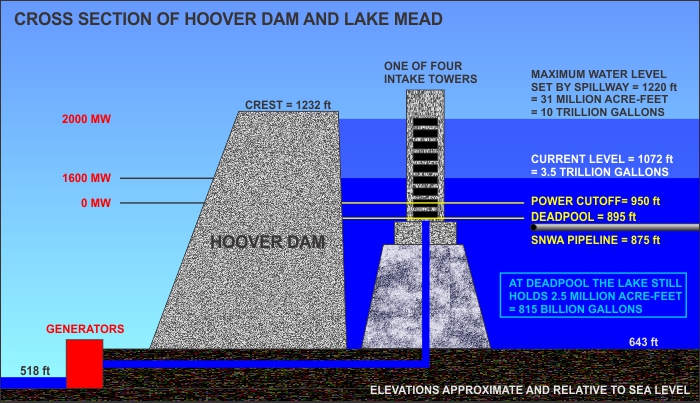 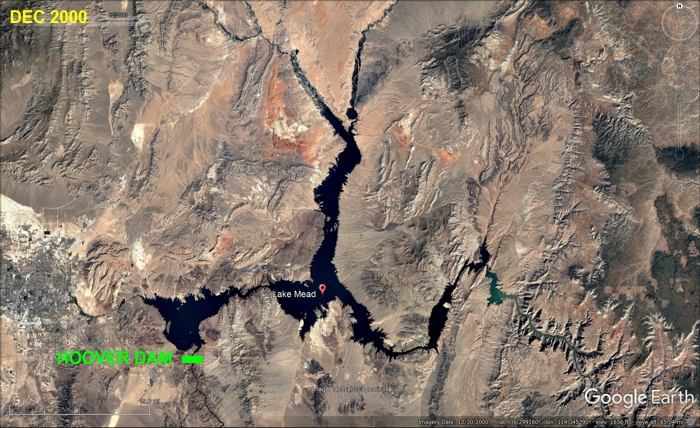 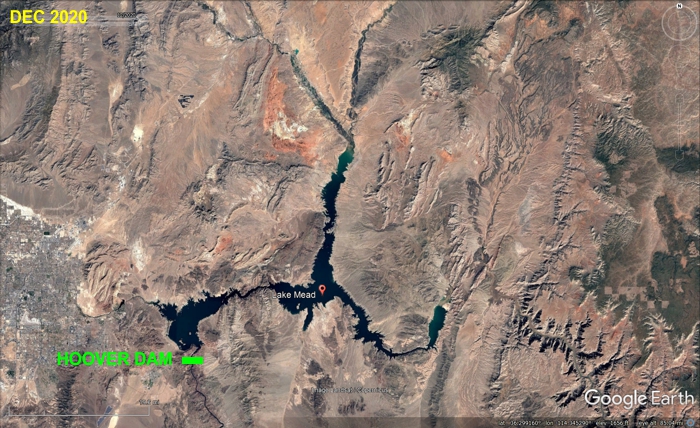 Rather than dwelling on the cause of this shrinking capacity (climate change), or the plans western states are making to deal with it (battling stakeholders), or the applicable laws of water distribution (the Colorado River Compact), I want to focus on a new concept recently encountered in my drought research. It concerns critical water levels behind dams, in this case Hoover Dam, and a phenomenon hydrologists call deadpool.

To create my deadpool graphic I needed to know how the various components of Hoover Dam fit together. The following diagram isn’t a “blueprint” but it accurately shows how the dam works. There’s a LOT more to Hoover Dam than most visitors see — even those who brave the subterranean tour. A complex network of tunnels, pipes, valves, and spillways ensure the water is delivered efficiently to drive the 19 electric generators. It’s a beautifully detailed diagram and worth spending some time on. Click to enlarge: 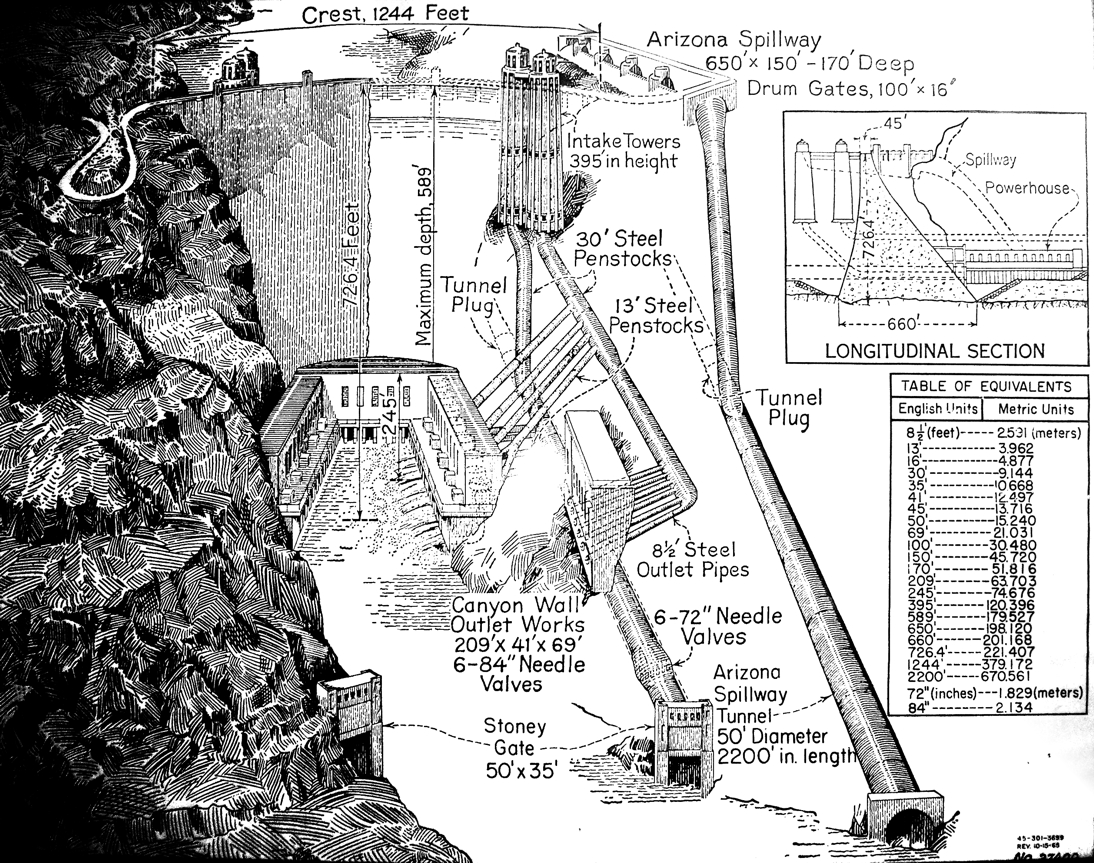 As the water level behind the dam drops, several operational aspects are affected:

Lake Mead is currently dropping by 12 feet per year. If Hoover Dam reaches deadpool, what happens to the Lower Colorado River? Unlike the Upper Basin, there are no large tributaries after Hoover Dam. Intermittent streams and Lower Basin rainfall will probably keep a trickle going, but the Colorado River, with its whitewater rapids and recreational boating, will essentially be history. And the several dams downstream of Hoover will also fall into deadpool. If the drought continues.

Is there any way to keep the Lower Colorado River flowing? It may seem like an engineering oversight not to have a way for that 815 billion gallons of water trapped in deadpool to get past the dam. But as they say in the software business, that’s a “feature” and not a “bug”.

Before the dam could be built, the Colorado River had to be temporarily diverted around the site. This was done by boring four 56 foot diameter tunnels through the walls of Black Canyon. Obviously, these tunnels are at the original level of the river, and now at the bottom of the reservoir. When the dam was ready to hold back water, these tunnels were plugged with concrete. At the time, nobody ever expected to see deadpool conditions.

Leaving one of the diversion tunnels operable to release deadpool water would require a valve 50 feet in diameter (to match the tunnel). At deadpool the pressure on the valve would be 383 psi (26 atmospheres), exerting around 100 million pounds of force. Yes, smaller diameter valves feel less force, but they also clog more easily. As with all engineering, tradeoffs are part of the design process.

It all comes down to a cost-benefit analysis. Even if such a valve had been built, the Lower Basin (Nevada, Arizona, California, Mexico) currently demands 6.5 million acre-feet per year. That would deplete the deadpool water in 140 days. So drilling a new tunnel, or reopening a diversion tunnel, just doesn’t make sense. Same with building mega-pumps to push water over the dam. Deadpool, unfortunately, is deadpool.

At Lake Mead’s current rate of depletion, 12 feet per year since 2000, it’ll reach deadpool in 2035. Unfortunately, because of the canyon’s “V” shaped cross-section, this rate will increase as the water level drops. When you allow for that, we could see deadpool before 2030.

There are two large unknowns. First, the Colorado River Compact mandates reductions in demand when the water level in Lake Mead drops to certain trigger points: Tier 1 (1075 feet), Tier 2 (1045 feet), and Tier 3 (1045 feet). Tier 1 just kicked in this year and mandates reductions starting January 1, 2022. This will slow the depletion rate, but the plan’s efficacy has never been tested. This is the lowest water level since the reservoir was first filled in 1941.

Second, it is possible the drought could end. Some climate models suggest the Southwest could become wetter as weather patterns shift. That may help locally, but won’t much feed the Colorado River’s Upper Basin. That’s where most of the water comes from in the form of snowmelt, and climate models are predicting that situation will likely persist.

Next Week in Sky Lights ⇒ Getting Water From Rocks

Q&A: How Drought and Extreme Rainfall Coexist
Q&A: Getting Water From Rocks
HOME