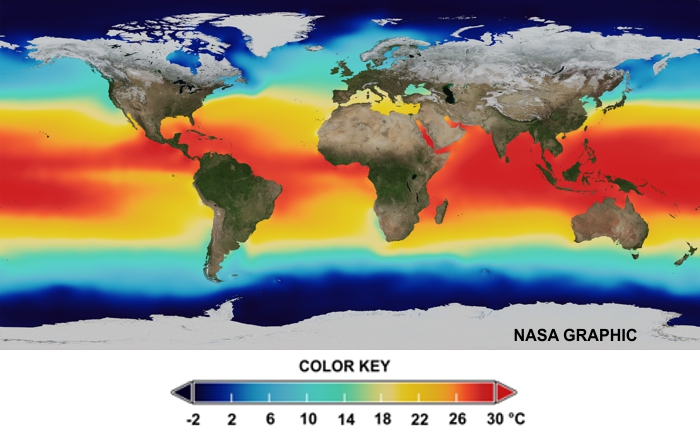 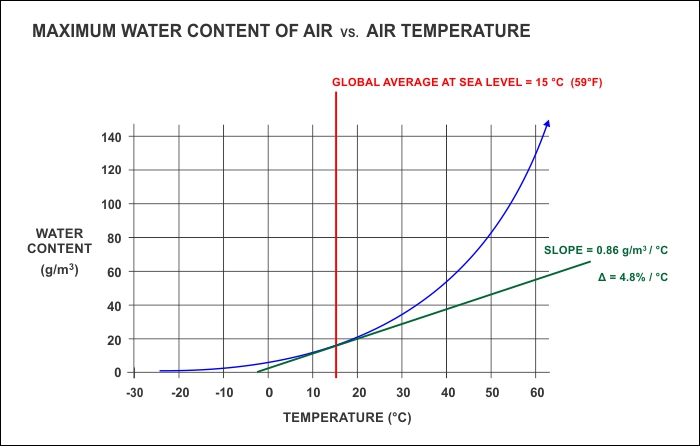 Question: I read your post about drought in the Southwest with great interest. We live next door in Utah and also depend on a well. What I don’t get is this: Weather people keep talking about how recent flooding in the Northeast was exacerbated by global warming, since warmer air can hold more water. If that’s true, then how come we’re having this extended drought in our area? — CL, Provo, UT

Answer: Yes, warmer air can hold more water. The chart above shows the relationship between maximum water content and air temperature. Water content is expressed in absolute terms: grams of water per cubic meter of air (aka absolute humidity). The global average for air temperature at sea level (over water) is 15 °C (59 °F), at which temperature each cubic meter of air can hold 18 grams of water vapor (18 cm3 when it falls as rain).

The slope of the tangent at that point on the graph shows how a change of 1 °C in either direction will result in a change of the water content by 4.8%. This makes tangible the claim that “warmer air holds more water”. And all that water will come down somewhere as precipitation.

Hurricane Ida had very warm and humid air to work with after moving so slowly over the Gulf of Mexico. Typically, water temperatures of at least 82 °F (28 °C) are required to grow a hurricane — during Ida’s formation water temperatures were close to 90 °F (32 °C). At that temperature the maximum absolute humidity would be around 35 g/m3 / °C — almost twice the global average. Even after landfall Ida was carrying a lot of water. That water ultimately fed the extreme rain events in the Northeast.

Not surprisingly, ocean temperatures vary depending on latitude and currents. The air temperature over water is closely coupled to this distribution. But this is an average temperature map. Significant changes in the temperature distribution occur regularly, driven by atmospheric circulation, variation of sunlight over the year, the Coriolis effect, tidal forces, and the infusion of cooler freshwater from melting ice.

One of these long-term periodic changes is the La Niña phase of the El Niño-Southern Oscillation (ENSO). La Niña is characterized by lower sea surface temperatures in the eastern Pacific. That results in less evaporation, and less water vapor carried east by the prevailing westerlies. La Niña has been causing drought conditions in the Southwest for the last 20 years. And this is not the first (or worst) drought to hit the Southwest.

We get occasional respites when atmospheric circulation delivers water vapor from elsewhere in what are called atmospheric rivers. The Pineapple Express is one example. But since 2000 the Southwest seems to be stuck in La Niña mode.

So having extreme rainfall events in one location, and a drought in another location, is not contradictory. Climate is a complex phenomenon. Our climate models are getting better, but there is much we still cannot explain or predict. Next week’s post will feature a prime example.

Next Week in Sky Lights ⇒ Deadpool at Hoover Dam