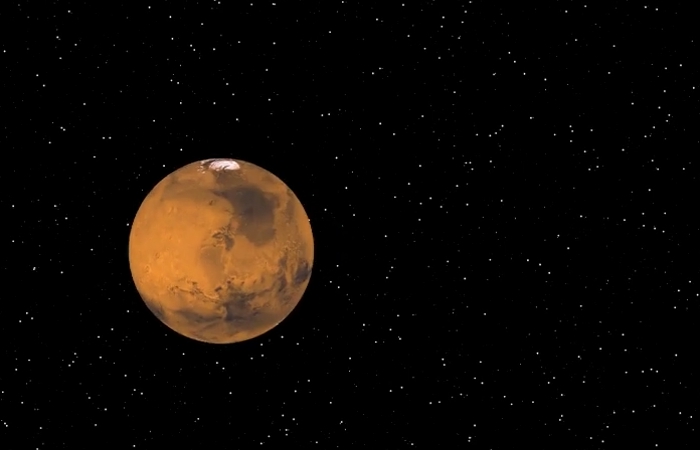 This week I indulge in a flight of fancy: How would it look if you flew from Earth to Mars at the speed of light? Einstein often did “thought experiments” (gedanken) where he imagined how things might appear were he a photon of light, traveling through space at the cosmic speed limit of 3.0 × 108 m/s. These gedanken afforded him insights that ultimately led to Special Relativity.

The video above is my gedanken. I was curious what such a trek would look like. To keep the animation short I placed Mars at its closest approach to Earth — 5.6 × 107 km. At the speed of light this journey would take 181 s (3.1 minutes). Also, instead of flying directly at Mars, I aimed at a point one Mars-diameter (6780 km) to the “right” of the planet.

The animation starts with Mars larger than it would appear from Earth. This was done so it would stand out better from the random starfield. To the eye, it would be a bright orangish point of light but it wouldn’t look noticeably larger than the brighter stars. To visually detect a disc, rather than a point, the human eye needs to see an object with an angular diameter of at least 0.017°. At closest approach Mars subtends an angular diameter of 0.0069°.

That’s why the first 90 seconds of animation show no change in the size of Mars. It isn’t until the 91st second that Mars has grown in apparent size to 0.017°. For the final (real-time) 76 seconds Mars continues to grow, slowly at first and then ever more rapidly, until it zips by on the left. At light speed you would transit the 6780 km diameter of Mars in 0.023 seconds.

You see a similar effect when driving down a highway: Distant objects grow in size slowly at first, but as you near them they grow more rapidly. This follows from the geometry of perspective and vanishing points. Nonetheless, it was instructive to run this gedanken — I was surprised that it took 90 seconds before Mars visibly changed in size.

When humans go to Mars the view will not change perceptibly during casual looks out the window. They’ll be moving at the comparatively slow speed of 11 km/s as they depart Earth, and decelerating all the way out to Mars. One way it’s a 9 month voyage. An increase in the size of Mars might be apparent over a week, but only if the size is “measured” with respect to the size of the window or other markings.

Disclaimer: The geometry behind this animation is correct, but some important physics is ignored:

For Animators: The increase in size (SCALE) of Mars on approach is a matter of geometry. Same with its shift to the left (X-OFFSET) on approach. The moving field of view is aimed for a point in space one Mars-diameter to the right of Mars, and starting from Earth at its closest approach. Right triangles easily solve the geometry.

Here’s the JavaScript to save you some time. These are useful effects in 2D or 3D. The animation dimensions are 700x700px and the frame rate is 30 fps. Because the math functions change so rapidly as you’re passing Mars I was expecting to need 60 fps to get smooth motion, but 30 fps looks fine to me.

Next Week in Sky Lights ⇒ How Drought and Extreme Rainfall Coexist

Q&A: The Roads Are Not Melting
Q&A: How Drought and Extreme Rainfall Coexist
HOME