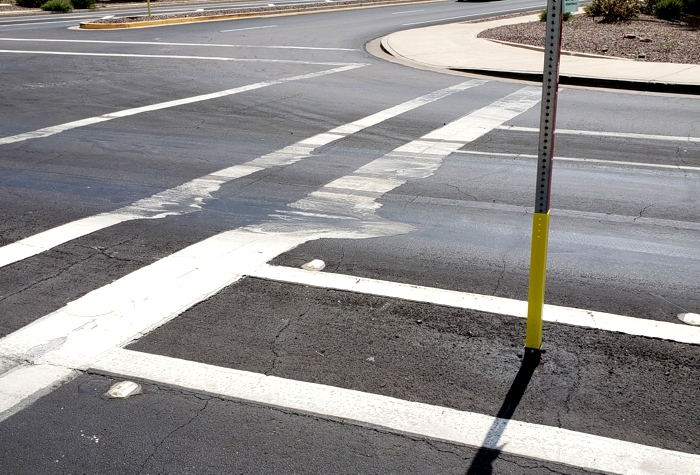 Question: I noticed this strange distorted crosswalk while out for a morning jog (above photo). We’ve been having 110+ temperatures for a few days now, and I’m wondering if this is causing the asphalt to melt? — AC, Phoenix, AZ

Answer: No worries. If you look for these distortions on concrete roads you’ll see the same thing. Nothing is melting. An asphalt surfaced road can easily reach 160 °F in 110+ temperatures because the dark color absorbs heat from the Sun. That can cause it to “soften” to the point where you could push a screwdriver into it, but to actually melt asphalt it needs to reach temperatures around 220 °F (the actual temperature depends on the specific mix of bitumen, gravel, and other components).

This is not to say softened asphalt doesn’t have its problems … some asphalt roads have been closed in very hot weather because heavy vehicles cause “ruts” to form, and heavy accelerating or braking can abrade the surface.

To explain that crosswalk distortion we need to consider the paint used for the lines. In nearly all cases they use an elastomeric (flexible) paint that holds up better when road surfaces expand and contract with temperature. Regular paint would quickly crack and flake off. Further, tiny glass beads are mixed into the paint to reflect light and increase visibility at night (this also improves vehicle traction). Finally, unlike normal paints that at least partially soak into whatever they’re applied to, road paint is a hot melt (400 °F) powder that solidifies on contact with the road. So road paint is a separate layer of material adhering to the road surface.

Now about those distortions: A vehicle stopped at that crosswalk needs to accelerate to get moving again. Acceleration requires a force between the vehicle’s drive tires and the road. It’s the force against the road that gradually pushes the paint out of alignment. Here’s the physics: 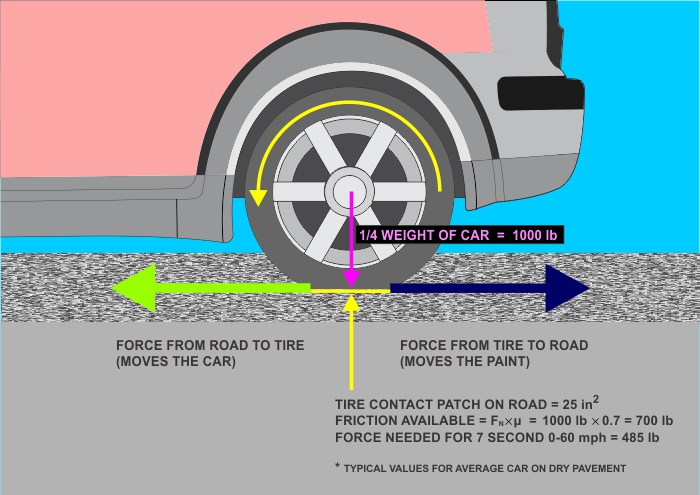 Newtons 3rd Law states that forces always arise in equal and opposite pairs. Although the word “force” has many meanings, in physics it describes how two objects interact. My favorite example: If you punch someone in the nose, the force from your fist to his nose is equal and opposite to the force from his nose to your fist. Of course, the damage and pain caused to his nose will be greater then that caused to your fist (unless he’s wearing a steel nose shield), but the two forces must be equal in amount, and opposite in direction.

The graphic shows the two horizontal forces involved when a vehicle accelerates from rest to driving speed. It would be illuminating to calculate just how much force is applied. Let’s make the following assumptions:

[FYI, because the car is supported by its tires, the size of the contact patch is approximately equal to the weight of the car divided by the air pressure in its tires. This is not exact since sidewall stiffness also supports some weight.]

We can now use Newton’s 2nd Law to calculate the force involved during acceleration:

Given the 700 lb available friction, the road easily reacts with 485 lb of opposite force. If the driver puts the pedal to the metal, 700 lb is the limiting force at which the tires lose their grip and start “burning rubber”.

But drivers don’t need to be burning rubber to distort the paint. 2.38 m/s2 of acceleration is typical for most drivers. Over time, especially at busy intersections, multiple small dislocations add up to what you photographed.

Notice how the amount of distortion is greatest in the first line after the stop sign, decreases in the second line, and is barely detectable in the third line. This is to be expected because, when a vehicle accelerates, the rate of acceleration (and force) tapers to zero as the vehicle approaches its desired speed.

Q&A: Puzzling Groundwater Resurgence
Flying To Mars at the Speed of Light
HOME