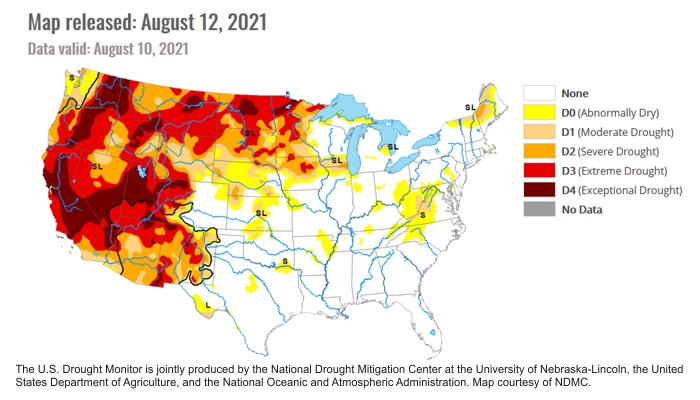 Question: Given the long-term drought we’re experiencing here in Arizona, how is it possible that my well started pumping more water lately after several years of decline in production? I installed a water meter between the well and the water storage tank in January 2018 to monitor performance. Well water production had been dropping for some time and we needed to pay for our first water delivery later that same year — not an auspicious trend.

But as you can see from the chart below, around July 2020 something very strange happened — we started pumping more water than we were using and our storage tank refilled to capacity. Our water system then went into “hysteresis mode” — weekly production would be small when the well pump was shut off by the storage tank float valve, followed by a week with high production as the tank refilled. The data is a bit noisy, but the line of best fit (green) shows our water production is trending upward! No complaints, but how could this be happening? — DH, New River, Arizona

Note: When the water delivery company refilled our storage tank, the float valve would shut off our well pump. Pumping didn’t resume until the 2000 gallon tank was drawn down by around 400 gallons. That’s the reason for those drops to zero gallons production every six weeks or so. And you can see (prior to July 2020) that the time between deliveries had been decreasing.

Answer: Yes, this is my question. I’m not connected to a municipal water supply so I need to understand what’s happening with my well. This required some research. I began by reviewing the science of groundwater. Let’s start with this basic diagram courtesy of USGS: 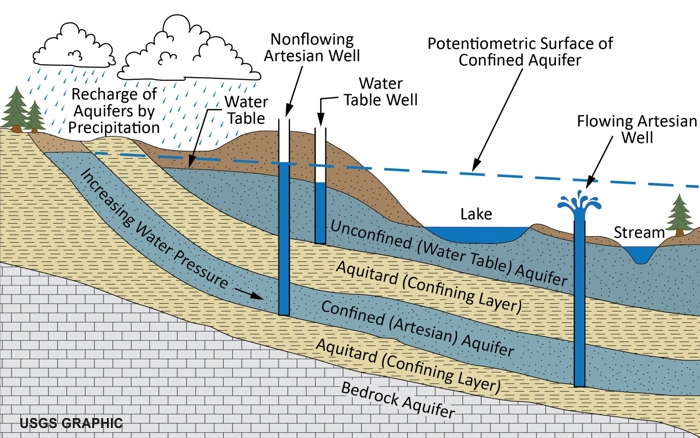 Precipitation that percolates into the ground can supply an aquifer with a steady source of water. Gravity causes this water to flow downhill. In places where the aquifer intersects the surface it forms a lake or stream. The flow proceeds slowly. Depending on the permeability of the soil, the speed of that flow can range from 50 ft per year to 50 inches per century.

Most aquifers in Arizona flow through a mixture of sand and gravel, but they can also flow through networks of cracks in harder rock or as an actual river through subterranean caverns. Here’s another USGS graphic that shows the typical sand/gravel aquifer structure: 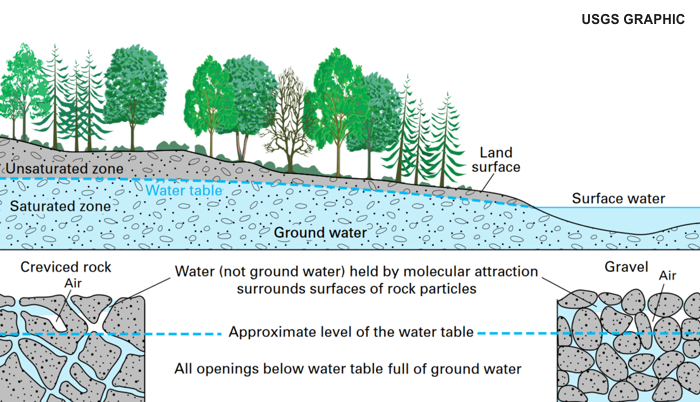 It’s worth noting that even when an intermittent stream (like our nearby New River) appears to be dry, there may still be a flow of water below the surface at the current level of the aquifer. The headwaters of New River lie around 15 miles northeast of here at 5000 feet altitude in the New River Mountains. The windward side, which drains into New River, benefits from increased rainfall and even an occasional dusting of snow. Here’s a view of those mountains as seen from my home on a clear January afternoon: 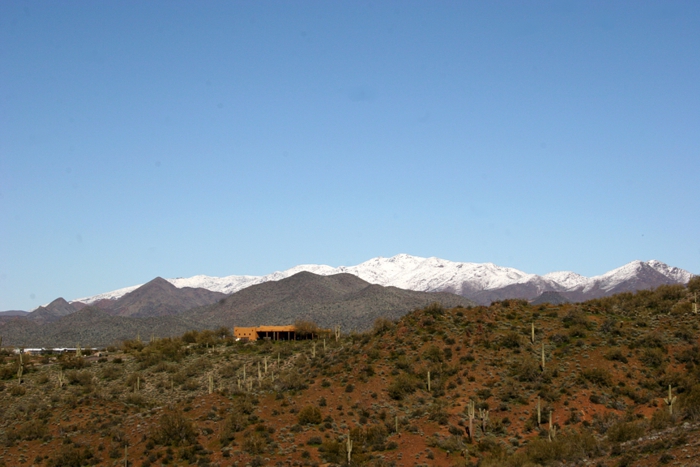 The aquifer thus flows from northeast to southwest, same as the general direction of New River. Over time, as the area becomes more developed, new wells are being drilled up-aquifer from my well. My assumption was that at least part of the long-term reduction in my well’s production was a consequence of these new wells pulling water from the aquifer before it could get to my well.

Seeking more info, I researched rainfall records for the New River area. Rainfall records in the Arizona foothills can be misleading, as the topography makes the precipitation very “spotty” and localized. We have a rain gauge on our weather station and it rarely agrees with the “official” records. Nonetheless, I needed to look at the rainfall data to see if that might explain the increase in my well’s water production. As you can see from the chart below, the overall trend has been downward for the last 30 years.

However, both 2019 and 2020 were above-average, and it was in July of 2020 that my well’s water production started increasing. 2021 is already above average, with my rain gauge registering 9.50″ to date. If this is the reason for my well water bonanza, then I have to wonder how long it might continue. 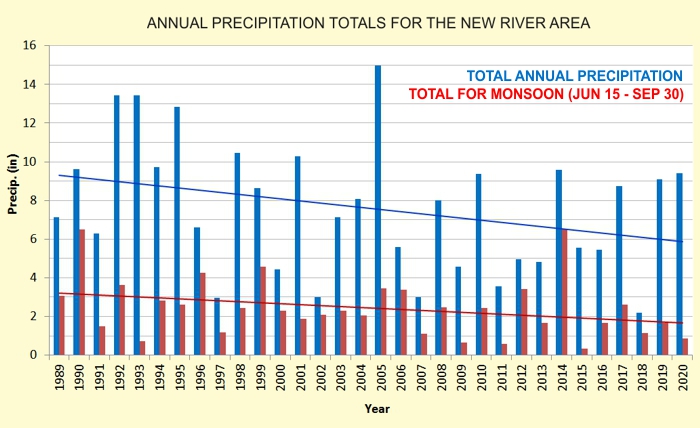 There was something else I was curious about. It’s hard to judge distances and relative altitudes when you live in the foothills, so I wondered how my well was located with respect to New River and its supporting aquifer. I created a cross-section plot using Google Earth Pro to show the topography from river to well (I explained how to do these plots in my Jan 23, 2021 post). The result follows: 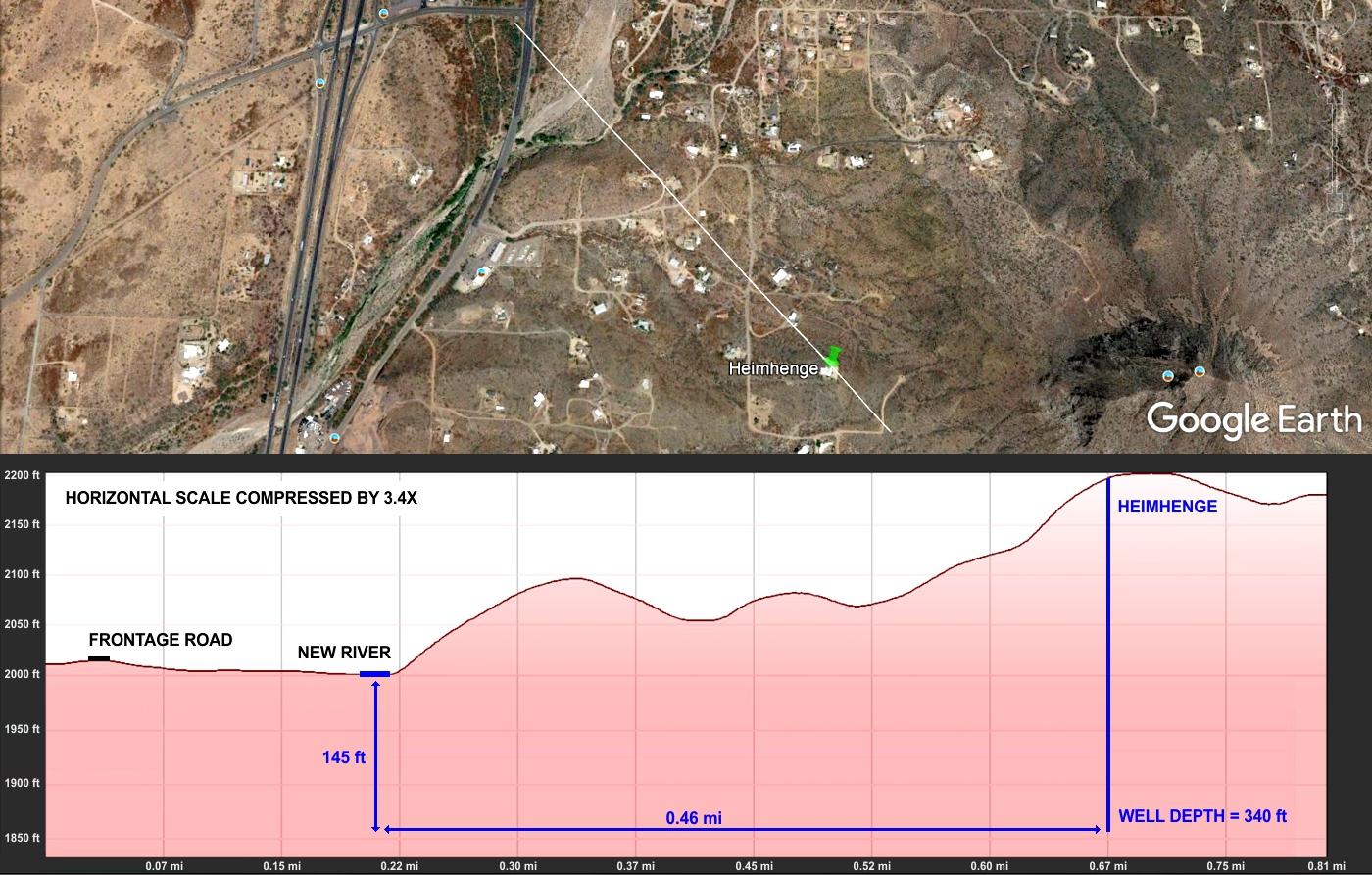 I was surprised to see my well actually tapped into its aquifer 145 ft below the level of the river. FYI, when the well was being drilled, we hit a good amount of water at 270 ft depth, but the driller advised we go lower since we were already into the drought and other wells were going dry. Seeing this plot made me wonder if I was tapped into the New River aquifer instead of some deeper aquifer supplied by a more distant source. The answer would bear on how rapidly the aquifer responds to recharging precipitation.

So I contacted Joe Drosendahl, a geologist at Phoenix College. The school provides a service called “Ask a Geologist” that can be accessed here:

This is what he told me:

Yes, it’s possible that the New River channel may be the source (or one of the sources) of the groundwater beneath your property. Unfortunately with more wells being drilled and used in your area, your water table may resume its decline. I looked at your graph and the downward trend is probably due to the drought that has been going on for awhile now. One reason for the large increase could be due to the source of your groundwater. We did have a very rainy spring this year. But some rainfalls are just local events and might not a big contributor to the groundwater beneath your land.

So the half-mile distance to New River and the altitude difference didn’t rule out the river aquifer as the source for my well. I’ve looked through my water pumping and rainfall data (which spans 3½ years) and I can see some correlation between local rainfall and gallons pumped, but it’s not a strong correlation. If I was tapped into a separate deeper aquifer then there should be no correlation.

I had considered other explanations like the earthquake back in 2015, land subsidence from over-pumping of groundwater, and blasting at a nearby quarry — all of which could modify the flow of an aquifer. But direct connection to the New River aquifer and the last two years of above-average rainfall now seems the most likely explanation.

Climate models suggest the Southwest could soon become wetter, ending our long-term drought. I have no idea if we’re already seeing that change, or if this is just a statistical blip. Either way, I’m hoping my well production continues to exceed demand. The last delivery cost me $100 and prices are only going to increase.

Next Week in Sky Lights ⇒ The Roads Are Not Melting

The Atlantic Overturning Meridional Circulation
Q&A: The Roads Are Not Melting
HOME