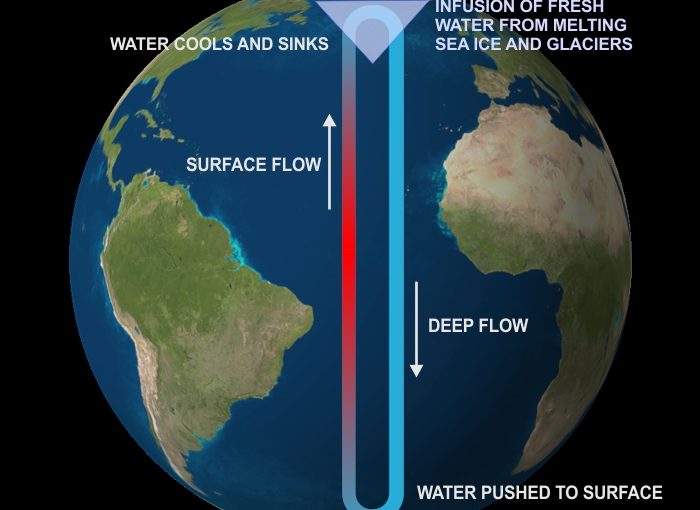 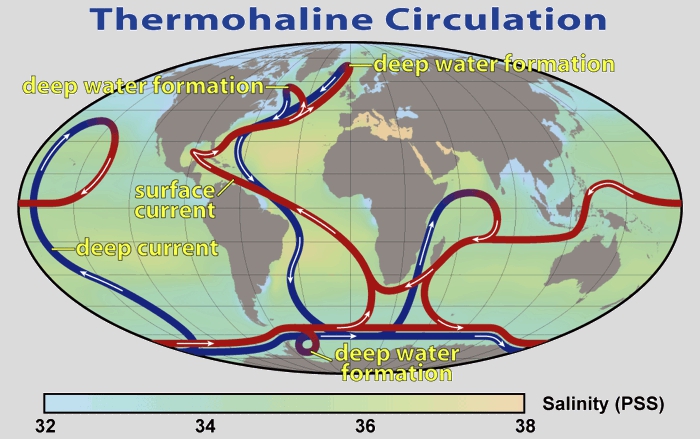 There’s something I recently learned about called the Atlantic Meridional Overturning Circulation (AMOC). Unfortunately, I expect we’ll be hearing much more about it in the future. The AMOC is often referred to as an ocean “conveyor belt” that transports water and heat between the north and south Atlantic. The AMOC consists of two flows: A surface flow that moves warm water north, and a deep flow that returns cold water to the south.

Although it’s often spoken of in isolation, it’s actually part of a global circulation system that’s driven by differences in both temperature and salinity. This is what oceanographers call thermohaline circulation (top graphic). The density of seawater is a function temperature and salinity. Colder water is denser than warm water, and salty water is denser than fresh water.

When denser water moves over less-dense water it will sink. Conservation of mass requires water to upwell in some other location in order to preserve the mean global sea level. Ocean currents are driven by prevailing winds, steered by the Coriolis force, and deflected by continents. Underwater heat sources like magma vents also play a role. The result is a complex pattern of currents linking all the oceans on the planet.

In reality the global circulation is far more complex than shown in the top graphic. Below is an old map from a military field manual. It’s 2577 x 1306 px in size, so click on it to enlarge. What is called the “west wind drift” around Antarctica is now referred to as the “Antarctic Circumpolar Current” (ACC). That current is driven by the prevailing westerlies. 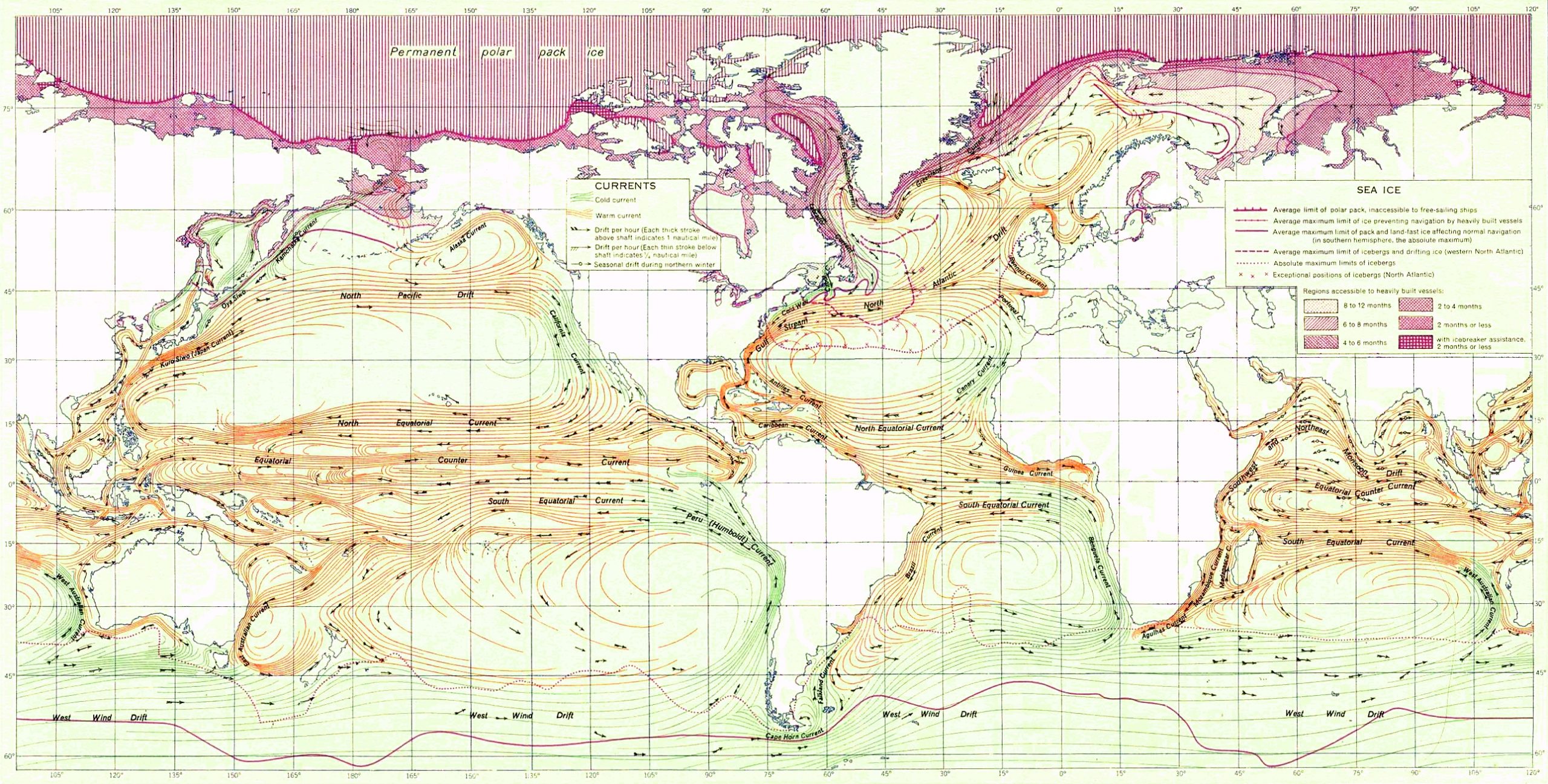 To understand what’s happening with the AMOC we’ll use this simpler model below: 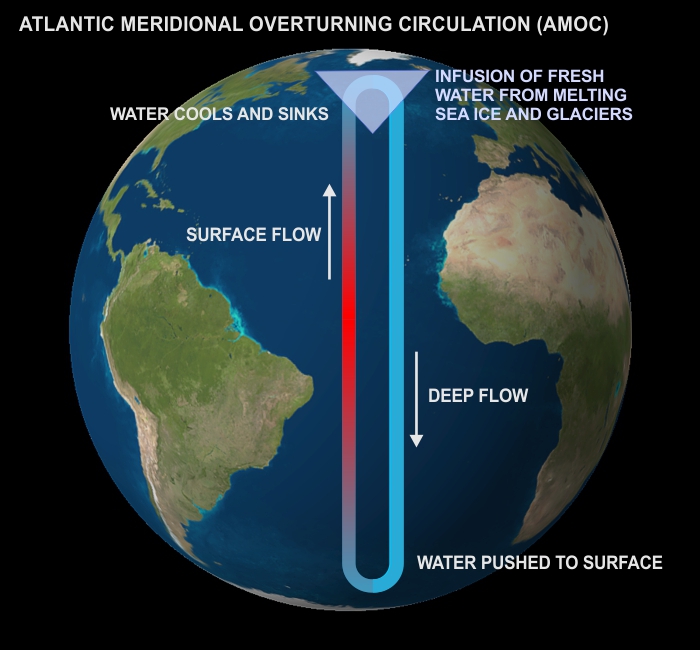 For millennia the AMOC has been moving millions of cubic meters of seawater per second. It transports heat to the northern hemisphere producing temperate climates along the east coast of North America and the West coast of Europe. As it returns south it brings huge amounts of nutrients to the Southern Ocean ecosystems. It also drives a lot of weather, including equatorial monsoons and Atlantic hurricanes. It takes approximately 1000 years for seawater to complete this north-south-north cycle.

Here’s the problem: Climate change is breaking the AMOC. The current has slowed by some 15% over the last 150 years, compared to the previous 1500 years, and is likely to continue slowing. The reason seems to be an infusion of freshwater at the north end from melting glaciers and snow on melting sea ice.

Freshwater initially floats on top the denser salty seawater, but is mixed with the seawater by wind and waves. This makes the seawater less dense and unable to sink as rapidly, shutting down the “pump” at the north end of the AMOC. Upwelling at the south end is a result of Ekman transport, as well as deflection by the continental shelf of Antarctica. If the AMOC downwelling “pump” slows, the southern upwelling must also slow.

Computer modeling shows the AMOC has multiple equilibrium states. We’ve enjoyed high flow states since the end of the last ice age, but there are other equilibrium states with much slower flows — including a complete shutdown. We don’t know for sure what all the effects of such a change would be, but the changing weather patterns we’re already seeing are at least partly due to that 15% slowdown.

Here’s the scary part … if the AMOC ever did shut down, positive feedback loops might keep it in that state. We don’t know if there’s any way it could be restarted. This is uncharted territory for climate science.