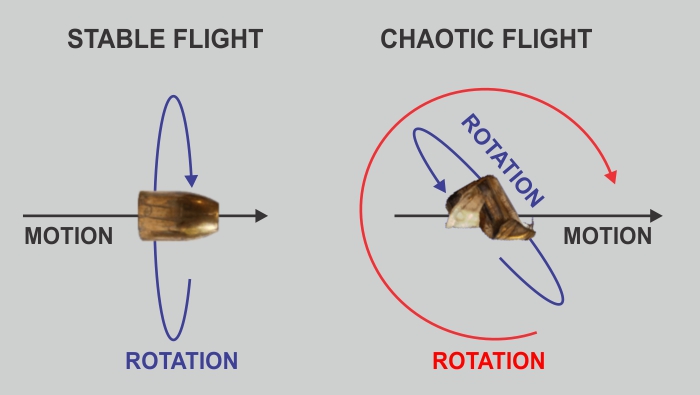 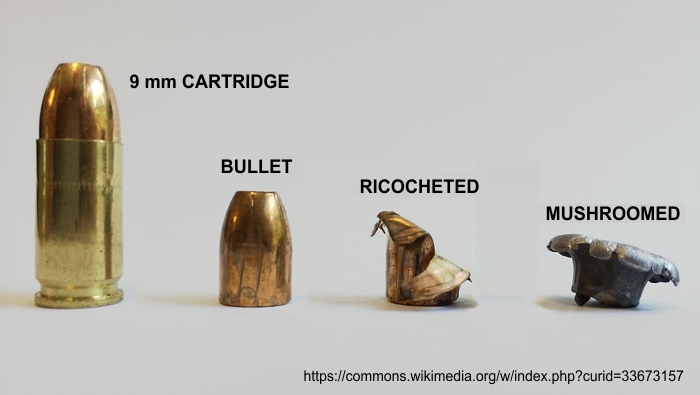 Question: Why does a bullet whistle when it ricochets? — DC, Mountaintop, TN

Answer: I should first point out that the number of bullets you hear ricocheting in movies is WAY more than happens in real life — but it does add some entertaining audio effects. I’ve been target shooting most of my life, and I can recall maybe a half dozen rounds that ricocheted as audibly as in the movies. Most of them were back in high school when we did target shooting at dumps and quarries, where rocks and metal scrap would often be hit. Since transitioning to safely designed outdoor shooting ranges 30 years ago I haven’t heard a single ricochet.

When a bullet ricochets and deforms it enters into complex chaotic motion as shown in this graphic:

By comparison, a cylindrically symmetric spinning bullet is relatively silent. If you’re unlucky enough to have one pass nearby, you’ll hear a “whooshing” or “fluttering” sound, but no whistling.

The whistle of a ricochet is produced the same way all sustained sounds are made — periodic disturbance of the air by a moving object. If the air is disturbed at a rate of 20–20,000 times a second (20–20k Hz) the human ear perceives a sound. The pitch of that sound is directly related to the frequency.

I did a spectrum analysis of that ricochet sound with Sony Sound Forge (the “Photoshop” of audio). You can see there are several frequency peaks between 100–2000 Hz. That highest peak at 633 Hz must be equal to twice the the rotation speed of the bullet in revolutions/second (rps) as it tumbles. I say “twice” because each face of the deformed bullet will push on the air as the bullet rotates. Thus, the bullet is rotating (initially) at 317 rps. Magnified views of the wave form show that the sound waves emitted are triangle waves. 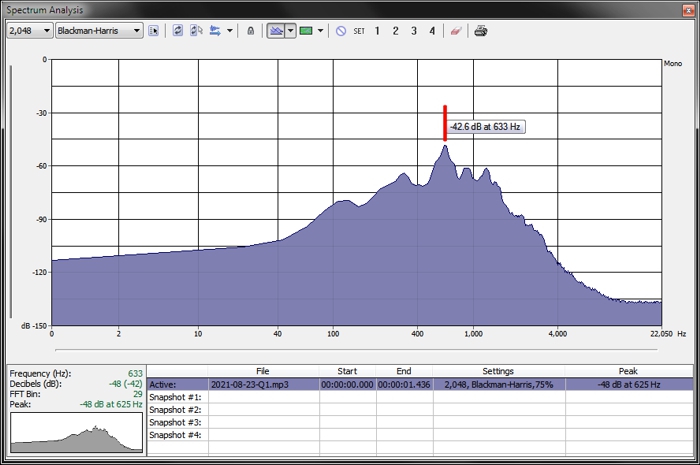 The other peaks combine with the dominant 633 Hz sound to produce the eerie “chord” sound in the whistle. Those other peaks are the result of multiple facets on the asymmetrical bullet disturbing the air as the direction of rotation precesses. The second graphic shows the ricocheted bullet spinning on two axes simultaneously. This graphic assumes the original rotation induced by rifling in the barrel would be tilted, and a new tumbling rotation would be imparted by the target it struck. Of course, what happens in a real ricochet is far more complex,

As it turns out, Euler’s Rotation Theorem says that a body can’t really rotate on more than one axis simultaneously. What happens when different rotational torques are applied is the body rotates around a single axis (instantaneously), but that rotation axis precesses over time. That’s difficult to visualize, but here’s a great animation to show what I mean:

The drop in pitch as the ricochet proceeds is a result of air drag slowing the bullet’s rotation. Since air drag is proportional to the square of the speed, we’d expect the pitch to decrease exponentially rather than linearly. This is exactly what you hear in a ricochet.

One final characteristic of the ricochet whistle is the decrease in volume over time — again an exponential decay. Virtually all ricochets are moving away from the shooter, but depending on the angle of the ricochet the volume decay can be rapid or prolonged.

As a test of my explanation of ricochet whistles, I synthesized an audio file that models the physics of a real ricochet). I created three sound waves using triangle wave forms, one at 633 Hz and adjacent peaks at 324 Hz and 910 Hz. Then I combined the waves, added exponential frequency and volume decays, and boosted the dynamics of the first 0.01 second for a percussive start. This is what I got:

I doubt I’d be able to sell that sound effect to any Hollywood studio, but it’s similar enough to the real thing. And it gives me confidence that my physical model of ricochet whistles is reasonably correct.