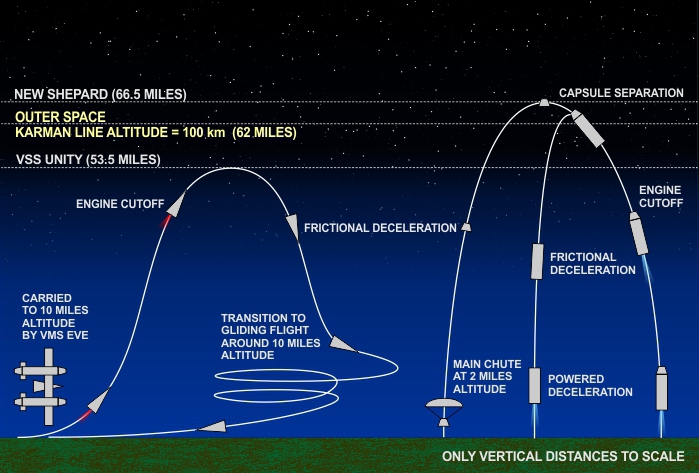 Richard Branson of Virgin Galactic and Jeff Bezos of Blue Origin traveled into space last month. It was a milestone for the fledgling “space tourism” industry. Ticket prices will be out of reach for most of us — $250,000 for Virgin Galactic and “not yet announced” for Blue Origin. But industry insiders see the price eventually falling to that of a business class transcontinental flight. What I want to do here is compare what you’ll get for your money if you buy a ticket to space from either of these companies.

But first let’s look at the actual hardware. Virgin Galactic’s craft, VSS Unity, is a space plane that’s carried to 10 miles altitude by its “mothership” VSS Eve. After release, VSS Unity’s hybrid engine propels it into space. On reentry, after decelerating, the craft transitions to flying like a glider and lands at the original launch site.

New Shepard, in contrast, is a rocket. Passengers ride in the capsule atop the rocket and, after capsule release, are propelled by momentum into space. Reentry is very much like space faring nations have been doing since the 1950s — a heat shield burns off most of your speed, a drogue parachute opens around 20,000 ft, and the main chute (three of them actually) opens around 10,000 feet. It touches down gently with a speed of only 1 mph.

The top graphic shows a comparison of flight profiles for each craft. Those profiles are sure to evolve over time as the industry matures. Even so, the two rides are very different experiences. And there’s been some discussion about what altitude qualifies as “space”, with some claiming VSS Unity didn’t get high enough and New Shepard did. So how high do you need to go before you can say you were in space?

NASA and the US military use 50 miles as the minimum altitude to earn astronaut wings. It was a somewhat arbitrary choice based on the capabilities of 1950s era aircraft and spacecraft. The rest of the world uses the Karman Line, which sets the start of space at 62 miles based on the distinction between aeronautical flight and spaceflight.

Truth be told, the view from both rides looks like space for awhile. Passengers can see the curve of the Earth, the blackness of space with myriad stars, and the blue-to-black gradient of the atmosphere. Whether you’d see the Moon is purely a matter of flight date and time. You would not want to see the Sun.

If you brought your camera along you could choose to overexpose the bright Earth and show the stars, or underexpose the stars to show the Earth. It’s a limitation of cameras not suffered by the human eye. The following is a simulation of what your eyes would see near apogee: 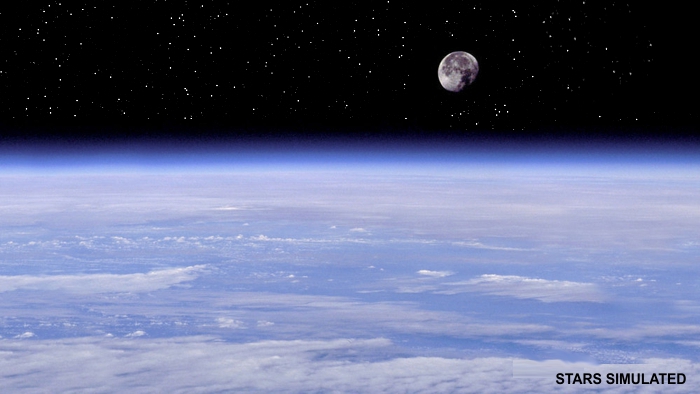 For many people the main attraction of space flight is experiencing weightlessness (technically microgravity). Be aware that weightlessness has nothing to do with how high up you go. For example: VSS Unity only hit 53.5 miles altitude, but its passengers enjoyed 4 minutes of free floating. New Shepard went 13 miles higher and experienced only 3 minutes of weightlessness. On sub-orbital flights like these, weightlessness starts at engine cutoff and ends when the air gets thick enough to start decelerating the craft.

So there’s your matchup. Honestly, it’s really a tossup. I like the longer overall ride and microgravity of VSS Unity, but the escape capsule and green fuel of New Shepard also has its appeal. Bottom line: That’s a decision I won’t have to make unless I win the lottery. And I don’t play the lottery.

Next Week in Sky Lights ⇒ Why Ricocheted Bullets Whistle